The organizer of a “Straight Pride” rally held in Modesto, Calif., on Saturday said his group remained committed to its cause even though it was outnumbered by counter-protesters.

“That does not change the truth of our message,” Don Grundmann, 67, founder of the National Straight Pride Coalition, told the Modesto Bee.

He then took at jab at those who turned out against him and the group of about 20 people who claim they support society’s traditional gender roles.

“They talk about diversity and attack us,” Grundmann said of his critics. “So-called diversity and tolerance is a one-way street.”

The counter-protesters numbered about 200, according to Sacramento's FOX 40, and local police tweeted that both sides remained peaceful.

The opponents, including some city officials, claimed that Grundmann and his supporters were trying to spread a message of intolerance toward the LGBTQ community and other minority groups.

“For every step someone takes to come and divide our community, spread hatred, spread bigotry, this many people are standing on guard to make sure it doesn’t happen -- with thousands more,” Modesto Councilman Mani Grewal told the crowd of opponents, drawing cheers from that group, according to the Bee. 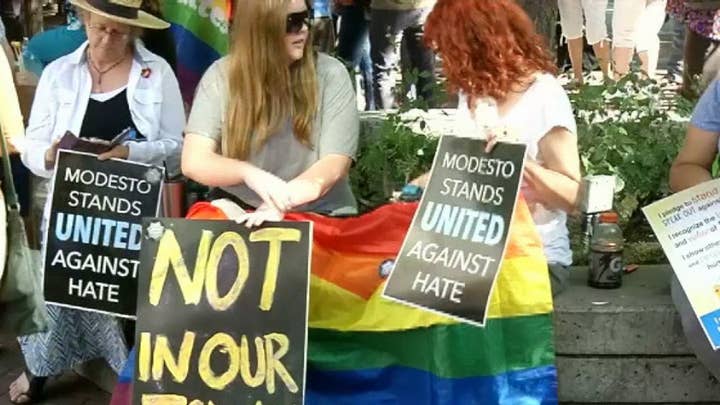 The event almost didn’t happen at all because organizers Grundmann and longtime friend Mylinda Mason faced a few obstacles along the way.

Earlier this month, city officials rejected their application to hold the rally in a city park, saying it was because the group’s liability insurance had been voided, FOX 40 reported.

Utlimately, owners of a venue called Durrer Barn agreed to host the rally, although co-owner Leo Durrer told the Bee they didn’t fully understand what they were getting involved in.

“This whole thing was presented to me as a little meeting, and I had no idea it was going to end up like this,” Durrer told the Bee. “I trusted these people wholeheartedly because I did not think they had a mean bone in them. Maybe it’s a really good lesson for me to check things out better in the future.”

He told the newspaper he shut the rally down after two people said protesters might show up, the Bee reported.