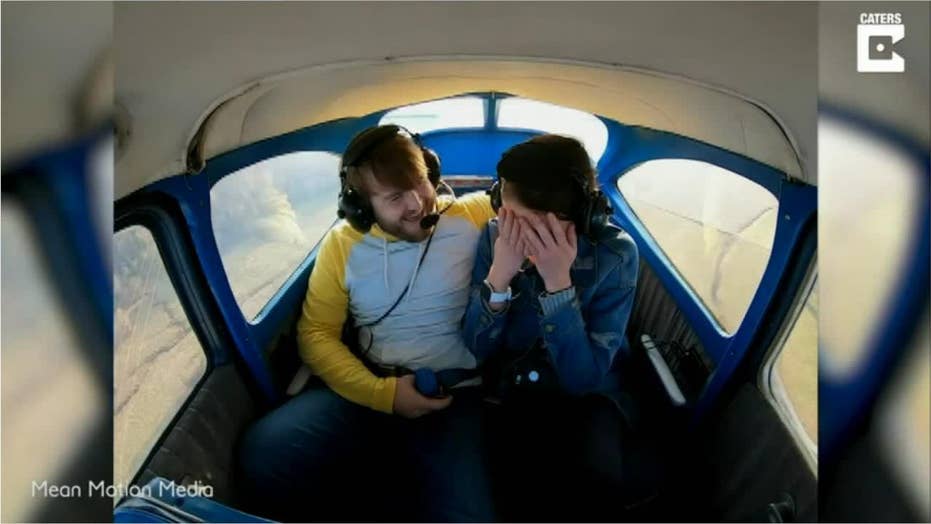 A Kentucky man surprised his girlfriend with a mid-flight proposal. Ryan Wilson built a proposal sign in his yard for his girlfriend to notice during their intimate flight.

A man has taken his love for his girlfriend to the sky.

Ryan Wilson of Lewisport, Kentucky, planned a surprise proposal for his now-fiancée, which involved a field, a wooden sign and a plane.

To create the romantic gesture, Wilson built a huge sign reading “Marry Me” out of wood, which he laid out in his yard. The man then took his unsuspecting girlfriend, Shawna Aud, on a plane ride.

“Shawna had no idea about what would happen on this flight and her reaction is so priceless,” he told Caters News Agency.

Ryan Wilson planned a surprise proposal for his now-fiancée, which involved a field, a wooden sign and a plane. (Photo: Caters News Agency)

In a 3-and-a-half-minute video of the sweet proposal, Aud is seen enjoying the ride before pilot Chris Conley steers the pair over Wilson's lawn and she sees the “Marry Me” sign, at which point Wilson presents her with the ring.

Aud begins crying at the shock and vigorously nods her head yes. Wilson then places the ring on her finger before Conley starts laughing and congratulates the newly engaged couple.

The pilot continued to circle around for a bit while they took in the view and soaked in the happy moment.

The pilot said Wilson had planned the in-air engagement prior to the flight, so Conley “knew what was about to happen” when he flew over the yard.

The couple is planning on getting married in January 2021.