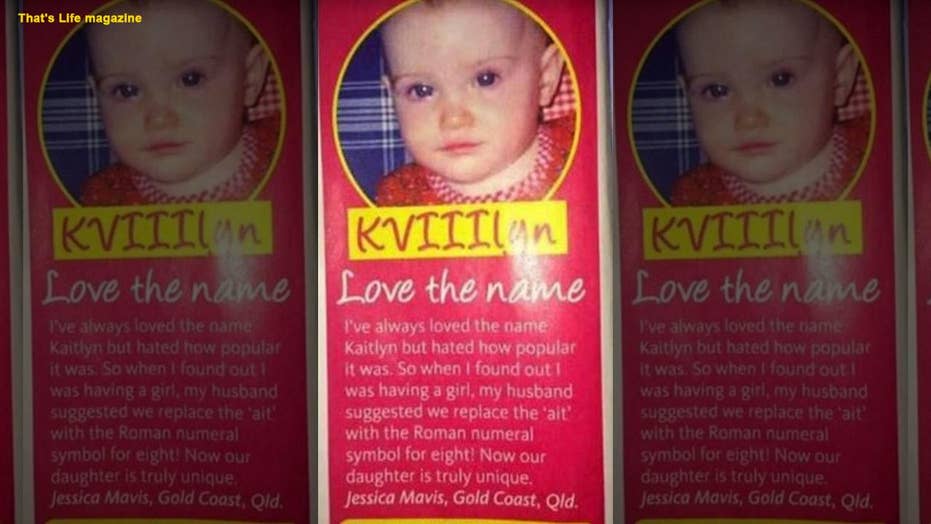 Australian couple get mocked on social media for choosing a name with a unique twist for their baby daughter.

Selecting a baby name is arguably one of the biggest decisions a parent will ever make for their child, though one couple’s choice to give their daughter a “unique” spin on a “popular” moniker has vaulted them into an online firestorm of judgment.

More than two years ago, Jessica Mavis of Australia shared the story of how the unusual spelling of her baby girl’s name came to be, The Daily Express reported. But in recent days, the wild tale is back in the headlines, thanks to new reports and a fresh frenzy of reactions on social media.

“I’ve always loved the name Kaitlyn but hated how popular it was. So when I found out I was having a girl, my husband suggested we replace the ‘ait’ with the Roman number symbol for eight!” Mavis wrote in That’s Life magazine in June 2016, sharing a picture of her child. “Now our daughter is truly unique.”

The Express explained, too, that parents are forbidden from including numbers in baby names in Australia.

Even after the explanation, however, KVIIIlyn’s parents’ play on words failed to shield them from ruthless criticism.

“She is going to hviii this name when she is older, will end up changing it by deed poll to the proper spelling,” one Facebook commenter wrote online earlier this week.

“The Romans didn't say it 'eight' so now her name is actually K-octo-lyn,” another pointed out.

Twitter users, too, didn’t hold back from sharing their true feelings on the one-of-a-kind moniker.

“Look how upset KVIIIlyn is, even she knows her parents are completely [sic] idiots,” one user quipped, sharing an image of the tot.

“How do we know it’s not baby Kviiilyn?” another wondered of the pronunciation.

“Henry the KVIIIlyn,” one offered.

Yet another critic brashly declared the parents' name choice as “just stupid,” while another went so far as to describe the little girl’s mother’s decision as “selfish.”

“Selfish Mum you give her the name but it’s hers. Imagine all the teachers like “ahh d--- I have Kviiilyn in my class,” the commenter wisecracked.

Though it remains unclear at this time whether or not little KVIIIlyn has grown to accept her name, one can only hope she’s doing grVIIIt.