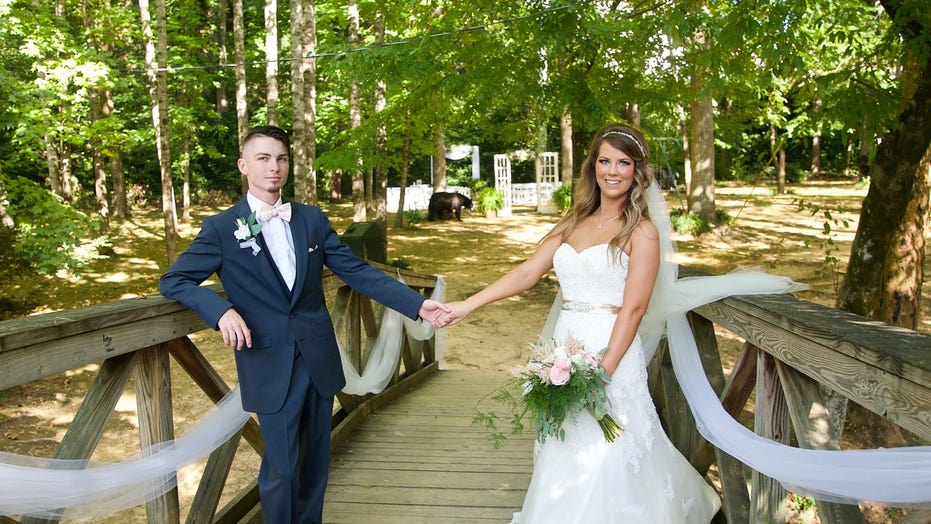 A couple in Tennessee was in for a wild surprise when an unexpected guest crashed their wedding.

Cory Brewer and Sarina Thompson were taking photos after their special day in the Great Smoky Mountains in Gatlinburg when a black bear showed up unannounced.

The bear eventually left on its own, but the bride and groom managed to get some impressive shots out of the surprising scene. (Leah McMahan of Gypsy Soul Photography and Salon)

Wedding photographer Leah McMahan, owner of Gypsy Soul Photography and Salon, said in a statement to Fox News that the bear made its entrance right after the ceremony.

"I did my normal ritual of family group pictures and bridal party pictures and then dismissed everyone to go on up the hill to the reception building to start eating," she recalled. "I had the bride and groom with me, starting to shoot, when we all noticed this bear."

While she quipped on social media that the monstrous photo-bomber "jacked my heart rate up to Jesus while shotting a bride and groom," McMahan told Fox News she was more concerned about getting the pictures.

"We left the grass area and went for the bridge to finish ... Being scared didn’t cross my mind, I just wanted 'the shot,'" she said.

She was not scared, she said, until after snapping a couple of pictures.

"However, when I stood up, he made a 'huffing' sound at me and started toward me. At this point, I am beyond scared," she remembered.

The bear actually managed to make it down the aisle, too — fortunately after Brewer and Thompson already said their “I do’s.”

The bear eventually left on its own, but the bride and groom were able to get some impressive shots out of the surprising scene.

It also turned out to be the "most adventurous" photo shoot for McMahon — even more so than the time she photographed a family and their pet opossum, she shared.