How to keep mosquitoes away this summer

Hot and humid weather brings out those pesky mosquitoes. Here are a few simple tips to live a mosquito-free summer.

Summer may be giving way to autumn, but the slowly cooling weather has yet to result in a decline in cases of mosquito-borne illnesses — namely the rare Eastern Equine Encephalitis (EEE) virus. This summer, cases of the potentially deadly virus have been reported in states across the country, such as Rhode Island, Michigan, and, most recently, Connecticut.

But a number of human EEE cases have also been reported in Massachusetts, which has been hit particularly hard with the virus this year. Health officials there recently confirmed yet another resident has been infected with EEE, marking the state’s eighth human case this year.

On average, five to 10 cases of EEE are reported each year, the Centers for Disease Control and Prevention (CDC) says.

MASSACHUSETTS WOMAN REPORTEDLY DIES FROM RARE MOSQUITO-BORNE VIRUS: 'SHE WAS SUCH A BEAUTIFUL SOUL'

Mosquitoes become infected with EEE after feeding on infected birds — specifically those that live in freshwater swamps. Typically, EEE-carrying mosquitos are only found where the EEE-infected birds are. But on occasion, according to the Connecticut Department of Public Health, “the virus gets picked up by other types of mosquitoes that bite other birds, animals, and people” —  thus creating a “bridge” between the virus and humans, so to speak.

Dr. Catherine Brown, the Massachusetts state epidemiologist, told LiveScience that birds from Florida — which has long dealt with EEE — migrate to New England each year, specifically to a state with a particularly dense population of red maple and white cedar swamps: Massachusetts.

Though a particular species of mosquito in the swamps feeds on the infected birds, other types of mosquitoes occasionally feed on the birds and subsequently become carriers. Those mosquitoes then pass the virus to humans and other mammals — namely to horses, which, according to the CDC, are particularly susceptible. (Humans and mammals are considered to be “dead-end” hosts, however, and the virus doesn’t spread from animal to animal, human to human, animal to human, or vice versa.)

After a couple of years, the birds infected with EEE build an immunity to the virus, according to LiveScience. When this happens, the transmission isn’t as effective, resulting in a decline in EEE cases. 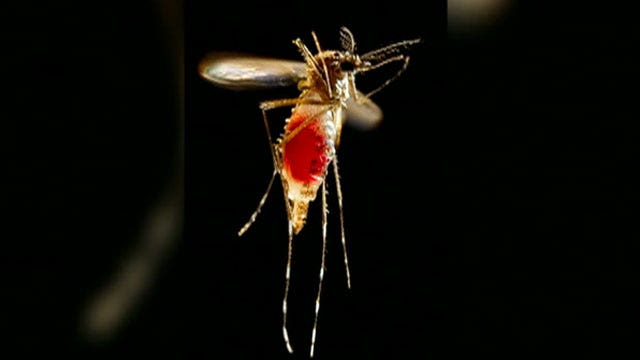 As the birds reproduce, however, the eggs hatch and the older, immune birds eventually die off. The younger birds without immunity are susceptible to EEE, and the cycle begins again, Brown explained. Sometimes the migrating birds carry a strain of EEE the other birds are not immune to, which further perpetuates the cycle.

“Taken together, these factors cause outbreaks in Massachusetts every 10 to 20 years, and these can last for several years,” LiveScience reports.

EEE “is one of a group of mosquito-transmitted viruses that can cause inflammation of the brain (encephalitis),” the CDC says. The virus is more common in the Atlantic and Gulf Coast states, though the Great Lakes area has also seen cases.

Symptoms of EEE usually appear four to 10 days after a person is bitten by an infected mosquito. Severe cases of the virus “begin with the sudden onset of headache, high fever, chills, and vomiting,” said the CDC, which noted, “the illness may then progress into disorientation, seizures, and coma.”

One-third of those infected with EEE virus die; survivors typically have “mild to severe brain damage.”  There’s no specific treatment for the infection.

Massachusetts health officials on Monday announced they are continuing to spray for mosquitoes — specifically in areas of the state considered to be at an increased risk for the virus, according to a statement.

The best way to prevent EEE virus and other mosquito-borne ailments is by draining standing water — like in birdbaths, buckets or on pool covers — as stagnant water can serve as a breeding ground for these insects. Other preventive measures include covering skin with long-sleeved pants and shirts while outside and properly using DEET-containing insect repellent.