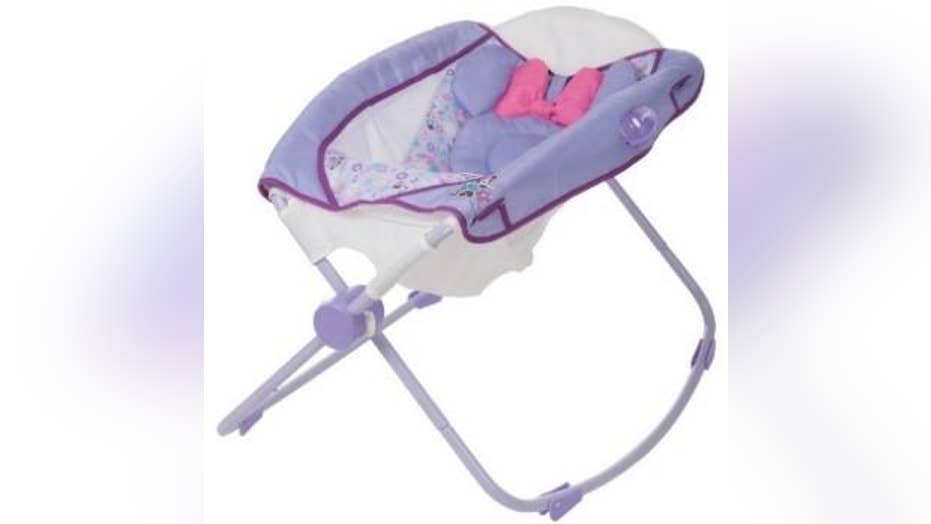 Disney and Eddie Bauer brand infant sleepers have been recalled over concerns about infant fatalities and injuries while using the products. While no deaths have been linked to the Eddie Bauer Slumber and Soothe Rock Bassinet or Disney Baby Doze and Dream Bassinet, the company behind the products noted fatalities reported with other inclined sleepers similar in design.

The products are labeled under Eddie Bauer and Disney brand names. (CPSC.org)

Dorel Juvenile Group USA issued the recall on July 31, and said the products are designed for sleeping or napping infants from birth to 6 months of age. The company said consumers should stop using the inclined sleepers immediately and to contact the company for a $60 refund.

No fatalities have been linked to the products being recalled. (CPSC.org)

The products were manufactured in China and sold at Target, Kmart, Ross, Marshalls, TJ Maxx and other children’s products stores between November 2014 and February 2017.

The recall follows Fisher-Price’s, which pulled 4.7 million of its Rock ‘n Play Sleeper from the market earlier this year, and an additional 71,000 units of its Fisher-Price Ultra-Lite Day & Night Play Yards sleeper accessory in June. A third company, Kids II, pulled roughly 694,000 Rocking Sleepers from the market in April. The company said five infants died after rolling “from their back to their stomach while unrestrained, or under other circumstances” since 2012.