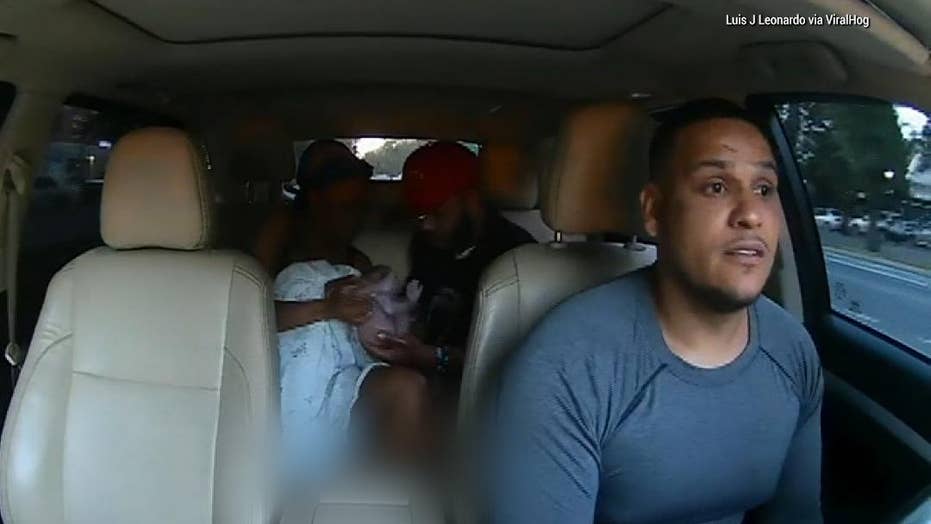 Caught on Video: Baby born in backseat of car on way to hospital

New York woman's baby unexpectedly arrived in the back seat of her ride-share car to the hospital.

Some Uber or Lyft drivers offer water or snacks to passengers, but one New York couple who requested a ride to the hospital got much more when their baby unexpectedly arrived in the back seat — thanks in part to the coaching they got from the front.

“Honey, you got to breathe, Mami,” Luis J. Leonardo told his passenger, who started the ride laying down in the back seat before yelling in agony as her contractions intensified.

“No, she’s literally coming out,” his passenger yelled back.

“Yeah, but you have to breathe,” he said.

“Damn, you gave birth in the car.”

“Her head is in my hand,” the unnamed passenger yelled back. “She’s out!”

After the baby girl, who came into the world screaming, was delivered in the back seat of his car, Leonardo helped coach the shocked parents into finding a blanket and cleaning her up.

BOY HAS OVER 500 'TEETH' REMOVED AFTER COMPLAINING OF JAW PAIN

He keeps talking them through the chaotic event before adding, "God bless the baby.”

The man in the back then takes their bag off the seat to make more room for the baby, while the mother searches for a towel to clean her up.

He then tells his passengers to call the hospital and let them know the baby was born, and gives the new mother credit for her wild birth story.

“Damn, you gave birth in the car,” he told her.

He also mentioned that he’d appreciate some help paying for the cleanup.

“You better hook me up with a little extra for the car wash man,” he told his passengers.

“Man I’m broke, I didn’t think this s--- was going to happen,” the male passenger said.

It was not clear which rideshare service Leonardo worked for, nor if he got a tip.