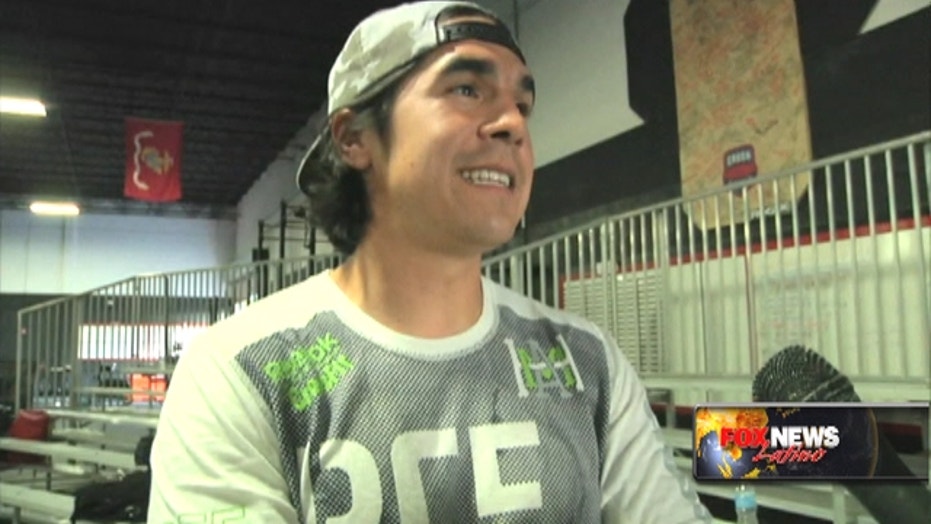 Face Behind CrossFit Says It's No Fad

Dave Castro who has been called

Dave Castro is clearly in charge. A group of CrossFit staffers circle the former Navy SEAL like a pack of wolves surrounding their alpha male.

“Can you put it up on the website?” Castro said, as he uncrossed his arms. A guy holding a laptop nods.

The 36-year-old Mexican-American is one of the most recognizable faces of the CrossFit Games, the intense new sport – dubbed “The Sport of Fitness” – that has exploded across the world since its first competition in 2007.

As director of training and games in Miami, he trumpets the sport as a smashing success that produces results. In the fitness world, it is known as a punishing sport that tests dominance through an intense spectrum of feats like lifting heavy weights, rope climbs and even swimming. It has an intense, loyal following.

CrossFit has grown exponentially in the past few years: There are over 5,500 CrossFit affiliated gyms, and more than 35,000 certified CrossFit trainers that instruct the fitness regimen that combines Olympic weightlifting, gymnastics and high-intensity interval training.

After the United States, Latin America has been one of the fastest-growing regions for CrossFit, according to Castro. Nearly 10,000 participants are competing in the CrossOpen, a world competition for CrossFitters, in Latin America this year. Castro lists Brazil, Argentina and Mexico as the countries with the largest amount of CrossFiteros.

“It is a culture and place that is near, and dear to my heart," Castro said.

But CrossFit has not been without its detractors. Some critics say it’s just another temporary fitness trend that is hot today but will likely be forgotten tomorrow.

“I'm not going to call CrossFit a fad – instead, I'll call it a bubble. I'm predicting its burst,” Matthew Basso, a fitness trainer, wrote in the Huffington Post a couple months ago.

Castro brushes off the criticism.

“It is ignorance,” Castro said.

In the CrossFit community, Castro is the director of the games. He is often called “the mastermind” because he designs the simple yet brutal workouts that work as a filter for the three stages of competitions during the annual season: The CrossFit Open, The CrossFit Regionals, and the CrossFit Games.

He credits his upbringing as the son of a hard-working truck-driver for his success and bulldog determination.

“Both my parents were Mexican—I'm Mexican. I grew up in Northern California and, you know, they had a very, hard-work ethic,” he said.

He beams when describing his family. “They put in some strong values for me, and that translated well over into the career I eventually had with CrossFit.”

It’s that determination that makes Castro, who started as an intern for CrossFit founder Greg Glassman in 2006, believe the exercise regimen will stick around than other workout programs.

“In 2007, people were saying it's a fad and it is going to die,” Castro said. “Here I am in 2014 and people are saying it is a fad and it’s going to die. It is not a fad. It is truly an effective program and we are changing people's lives and for that reason it is not going to go anywhere.”

The real question, he said, is how much it will grow in the next five or 10 years.

“How big is it going to be then?” he said as he walked over to his staff.

Though Castro is not one of CrossFit’s top athletes, like Midwesterner Rich Froning or the United Kingdom’s Samantha Briggs, Castro arguably plays a bigger role in the sport and in  developing the CrossFit Games—the nationally-televised competition where the top athletes compete for “ Fittest on Earth.”

In a way, he serves as a de facto Games commissioner.

Every Thursday night, over a five-week period of what is called the CrossFit Open, Castro and his crew unveil a weekly workout streamed live online. It is followed by video demonstrations by the sports’ top athletes.

Three years ago, 27,000 people participated in the Open tournament – but that number has steadily grown every year. This year, over 205,000 athletes worldwide have signed up, according to statistics provided by CrossFit headquarters.

For the Open, participants who pay a $20 registration fee have four days to do the workout and post it online. Depending on the workout of the day, or WOD, the score is normally counted by how many repetitions the competitor completed in a set amount of time.

The competitors who do the best in the Open move on to regional tournaments, and those who finish with the best scores make it to the Games, which are held every year in Carson, Calif.

Raiko Sarduy, 25, found CrossFit in Afghanistan as a U.S. Marine in 2011 while doing "Murph," one of the CrossFit "Hero" workouts that are mostly named after fallen U.S servicemen. All of them have a reputation for being extremely difficult.

"It took me two hours and change. That was my introduction to CrossFit," Sarduy said as he remembered how he and another Marine wore armored gear during the workout, which consisted of 100 pull ups, 200 pushups and 300 air squats.

"I pretty much hated it, but it wrecked me so bad that I really wanted to do it more after that," said Sarduy, who is now a coach at CrossFit A1A in Miami Beach.

In the Helmand province of Afghanistan, Sarduy lugged 30-pound, M-240s as a member of the Marine Corps infantry. CrossFit, he said, helped him get through the most punishing days.

"(CrossFit) was something that I could use in my job. If you are an infantry man in Afghanistan and you are in the middle of a firefight, bench pressing 300 pounds isn't going to save your life," he recounted. "But if you have the (energy) to run 400 meters with 60 pounds on your back, lay down a 240 which weighs 27 pounds and run somewhere else—it makes you stronger for your job."

Sarduy is competing in the CrossFit Open for the first second this year and has become almost obsessive about his fitness training.

Sarduy, who is Cuban-American, also takes part in the Paleo diet, the nutritional plan that many CrossFit athletes utilize to help their athletic performance. The plan emphasizes eating organic meat and produce while avoiding grains, dairy, sugar and minimizing alcohol intake.

For his Cuban mother, Sarduy's Crossfit regimen and diet can be confusing – a cultural clash between a generation that relies on rice and beans as a staple of their meals, and a newer one that eschews carbs and legumes.

"I go to my mom's house, bro, and she is really not happy when I can't eat rice. I can't eat beans," he laughs. "I try to explain but she's like 'You're stupid, you grew up on this food.’"

Danny Lopez-Calleja has a thick beard and tattoo sleeves that run down his bulging arms. In 2009, the 29-year old Cuban-American, who is also a punk rock musician, opened CrossFit Soul in South Miami with his wife, Monik.

"Crossfit has let the everyman feel very athletic and competitive," he said.

When the doors opened, the couple only had three clients. Almost five years later, they have 200 and operate one of the most respected Olympic Weightlifting programs in Florida – Team Soul Lifting.

"You will have people that travel from all over South America. From Ecuador, Uruguay, you know, from Paraguay. They are coming from everywhere to come listen to what you have to talk about,” said Lopez-Calleja, an Olympic weightlifting instructor who travels all across Latin America to conduct CrossFit seminars.

Lopez-Calleja, a recovering drug addict, credits the high-intensity workout for his eight years of sobriety.

"Heroin and cocaine ruined my life. When I got clean, one of the first things I learned about was CrossFit and it was like the anti-jock movement, at the time. It was the punk rock of fitness," he recalled. " It became a huge part of my life and another reason to stay clean."

On a pro-bono basis, CrossFit Soul trains patients from a nearby treatment center three times a week.

"Through (CrossFit), I was able to give back to the treatment center that helped save my life," he said about his fitness initiative to help recovering addicts and alcoholics.

Castro walks out when he is introduced by an announcer. His long, brown hair is tucked underneath a baseball cap turned backward. The crowd cheers enthusiastically.

But when two of the sport’s most famous athletes, Talayna Fortunato from Naples, Fla., and Camille Leblanc-Bazinet of Canada follow him out a short while later, the crowd erupts with an even louder explosion of applause.

It is clear who the real celebrities are here.

Leblanc-Bazinet walks by some giddy members of the audience and shakes the hands of some of her fellow CrossFitters, who quickly take out their smart phones and snap photos. Seconds later, they are posted on Instagram, Twitter and other social media sites.

“I have my Camile moment!” one Twitter feed said.

Holding the microphone close to his mouth, Castro announces the new workout to the two athletes and the rest of the CrossFit world: a strenuous gauntlet of overhead squats and chest-to-bar pull-ups in three-minute increments. None of the movements are easy. The crowd groans.

He yells out to the athletes the new workout concocted just for them—and for 200,000 of their closest peers.