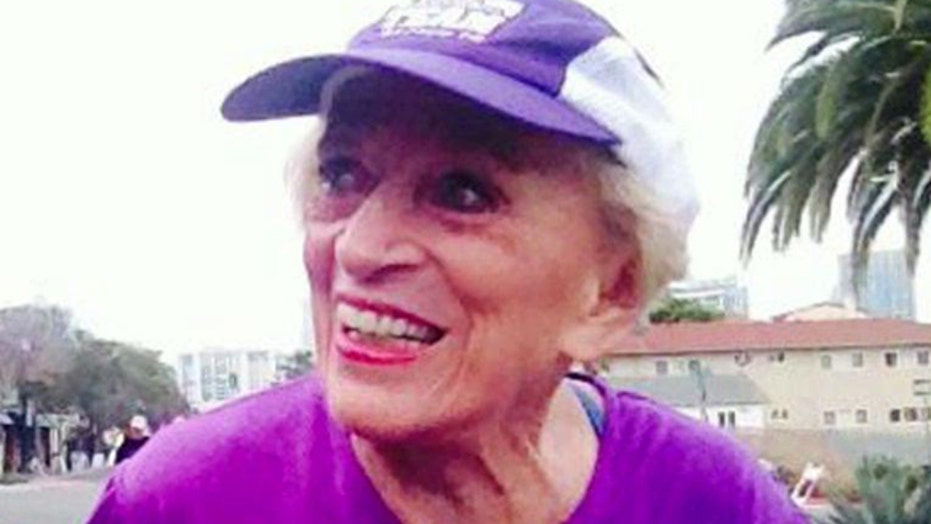 A new U.S. record was set at the Suja Rock ‘n’ Roll San Diego Marathon in California on Sunday – by 91-year-old Harriette Thompson.

The nonagenarian now holds the U.S. marathon record for the 90 and above age group, after finishing the 26.2-mile race in 7 hours and 7 minutes.

Thompson is no stranger to running, with Sunday’s race being her 15th marathon. However, she said this race, which she ran alongside her son, was harder than most because of one huge obstacle: She is currently undergoing radiation treatments for squamous cell carcinoma.

“I would say I didn’t train; it was unfortunate because I had had all this radiation done to my legs, and I could barely stand to walk around, it was so painful,” Thompson said. “The last couple weeks, I was able to go to the [YMCA] and do some elliptical, maybe an hour a day, and I ran a 5K just a week before the marathon, but I didn’t have much training. That’s why I was wary about whether I could do it.”

But one day after the race, Thompson reported feeling “great,” despite the tough hills throughout the course.

“Yesterday was fun, especially the first 13 and half miles,” Thompson said. “Then I got a little weary around mile 17, 18, 19, and I thought when I get to the 20s, ‘I’m really going to be inspired,’ but then these hills made it very tiring.”

Because Thompson was a contender to set a new U.S. record, she was allowed to start Sunday’s race alongside professional runners – including Meb Keflezighi, this year’s winner of the Boston Marathon. Thompson said she was a little concerned about starting the race next to much faster runners.

“Meb came over and had his picture taken with me, and I was really excited to be up there at the front, but I was a little concerned I’d be mowed down,” Thompson said. “When that [starting] gun went off, I knew they were going to hit the road, and I tried hard to stay out of their way. My son told me to [run] straight, and he stayed behind me so if anyone was going to run me over, they’d run him over first!”

Throughout her 15 years of racing, Thompson has raised more than $90,000 for the Leukemia and Lymphoma Society. When Thompson ran her first marathon in 1999, she did it in hopes of raising money to find a cure for a close friend who had been diagnosed with the disease. And over the years, the cause has taken on significant meaning to Thompson as she’s seen more family members and friends fight cancer.

“It meant a lot to me this year, because I just lost my brother who was 99 years old, and he had lymphoma,” Thompson said. “And my husband’s brother had just died a couple of year ago of leukemia, a rare form, and he was much younger – only 73 when he died. I’ve had a lot of friends who have had leukemia and lymphoma.”

Thompson said she doesn’t consider herself a particularly remarkable runner and has been surprised by all the attention she has received – though she noted it was fun having fans request “selfies” with her on the race course.

“I think that’s funny, because I hear that I’ve been inspiring, and I’m glad I am but it’s something that I’d guess,” Thompson said. “If you can get out and exercise, that’s the best thing and never think you’re too old because I’m proof that you’re not.”

Thompson celebrated her finish by spending time with her family – and enjoying a popsicle. She said she would love to do another marathon, and she thinks that with more training, she could finish even stronger.

“I think it would be great, the only problem is I’m not sure whether I’ll still be here. But if I am, I think I’ll be better now with getting over the radiation,” Thompson said. “I should do better if I train some more.”

Soon, she will return to her home in Charlotte, North Carolina, where she will spend time with her husband.  Upon reuniting, the couple will celebrate another significant achievement: their 67th wedding anniversary.