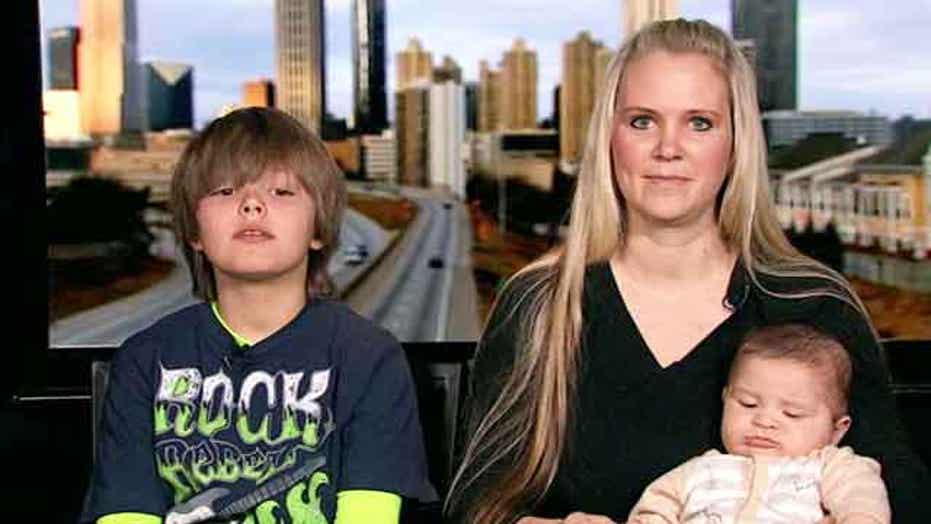 A 9-year-old boy and his 10-year-old friend are being hailed as heroes after helping a woman whose baby stopped breathing. One boy gave instructions on how to CPR while the other boy waited for an ambulance.

Susanna Rohm said that she was holding her 2-month-old son Isaiah in her lap on Monday when she realized something was wrong.

"I noticed he looked pale and so I looked at his arm and his leg and they were limp," said Rohm. "Then I noticed that he looked like he wasn't alive."

Scared and home alone, the Marietta mother couldn't remember how to give CPR. She jumped up and lost her cellphone in the commotion. There wasn't a landline in the house, so she stepped outside to get help.

"I had him in my arms and still screaming over and over.  Then I ran outside. I saw two boys playing across the street and I yelled, 'go ask your parents to call 911,'" said Susanna.

Ethan Wilson and Rocky Hurt were tossing a football in a front yard.

"I was thinking we better go out there to help and actually call 911 instead of getting scared," said Wilson.

Rocky then ran over to help.

"He came in and I had my hand on my baby's chest just screaming and the little boys said, 'put two fingers on his stomach,'" said Susanna.  "He said, ‘press down five times,' so I did five compressions, and then he said, ‘breathe in his mouth.'"

After a few minutes little Isaiah belted out a loud cry. An ambulance arrived moments later.

Rocky said he doesn't know how he kept calm.

Susanna is convinced things would have ended differently if Rocky and Ethan hadn't been there.

"If the little boy hadn't shown me how to do the compressions right here...and said that in that moment.  My baby would not be alive right now. And I am incredibly grateful," said Rohm.