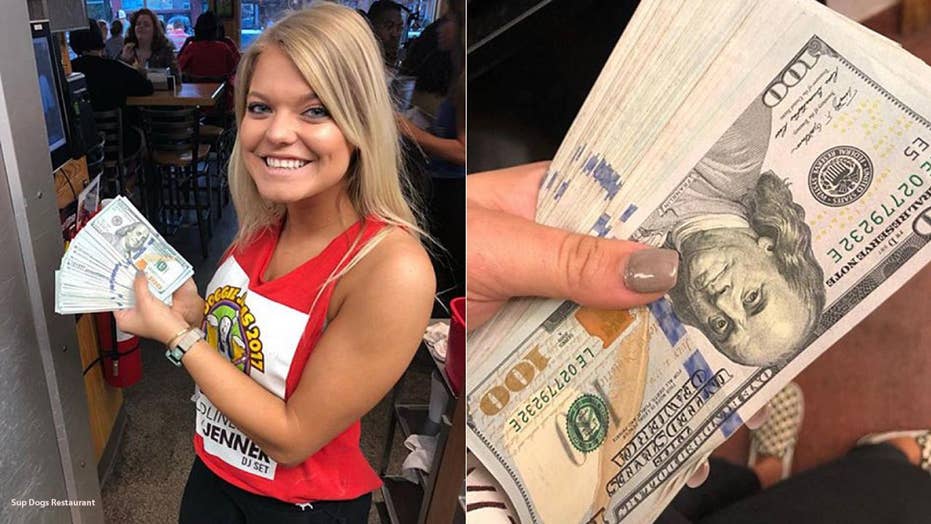 A server in North Carolina received a $10,000 cash tip from a customer who ordered two waters. The generous tipper ended up being YouTube personality Mr. Beast.

A server at a restaurant in North Carolina was given a $10,000 cash tip by a patron who ordered two waters.

Alaina Custer, an employee of Sup Dogs in Greenville and student of nearby East Carolina University, was shocked when she discovered the stack of bills left on the table Saturday.

“I literally didn’t think it was real. I picked it up and it was a giant stack of hundreds, I was shaking and just kept asking, ‘What is this?’ I thought someone was playing a joke on me,” she told The News & Observer.

The large tip was left with a note that said “thanks for the delicious water,” according to Sup Dogs owner Brett Oliverio, the Observer reports.

When Custer found the tip, there were two men at a nearby table filming her reaction because the person who left the money is a YouTube personality known as Mr. Beast.

Sup Dogs is a popular spot for locals and college students.  (Google)

“They just told me about their YouTube channel and how they were going around blessing servers’ days,” Custer said.

Mr. Beast, who has over 8.8 million subscribers on his channel, came back into the restaurant to join his crew and Custer said she “hugged them all.”

Custer said most of the people who work at Sup Dogs are “broke college kids” so she decided to share the tip with her coworkers.

“I was so blessed to have that money. We got to all split it up, which will help a lot of people,” she said.

This isn’t the first time Mr. Beast has given away a large chunk of money and recorded it for YouTube. In another video on his page, he gives away $10,000 to a “random homeless man” and shares the encounter online.

As of Monday morning, the video of Custer’s reaction had yet be posted on Mr. Beast’s account.