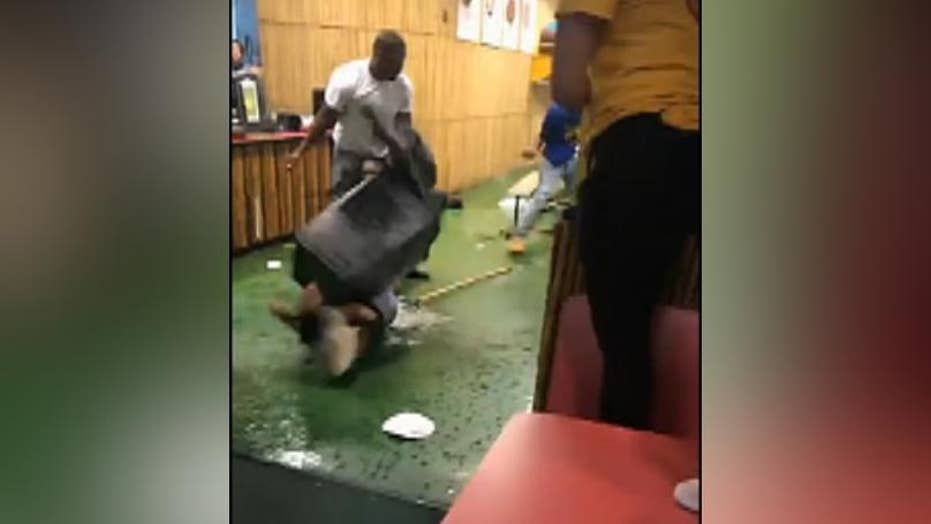 Mops and garbage cans were used as weapons at a brawl at a children’s restaurant, Go Bananas. Now, thousands are signing a petition to close the restaurant down after a slew of violent activity at the location.

A fight involving at least five adults at a restaurant for children was caught on camera this weekend, prompting many to demand that the kid-focused establishment be shut down.

In the recording at Go Bananas in Norridge, Ill., several adults are seen fighting each other near a dining table, which appears to be set up for a child’s birthday. Outside of the room, a banner reads “Happy Birthday.”

The adults involved in the fight throw punches before one woman grabs a mop to use as a weapon. Two others involved threw what appear to be trash cans at others in the fight. According to reports, a baby was sitting only a few feet away from the altercation.

The chaos was posted on social media and has been viewed over 200,000 times.

No one was arrested in the brawl, but the violent video has prompted the Norridge president to meet with the restaurant’s owner, FOX32 reported.

The president is not the only one outraged by the scene at the Chicago-area family amusement center. Thousands have taken to social media to demand Go Bananas be shut down. Nearly 4,000 have signed an online petition as of Tuesday afternoon.

“We have to come together as a community to do what we can to put an end to the amount of violence that is pouring into our neighborhoods, especially at a children's facility,” the petition reads.

The business has had a history of violence, the police chief told Chicago CBS.

This also is not the first time Go Bananas, which has rides and games, has been in the news. In 2011, a 3-year-old boy fell to his death from a roller coaster inside.

Go Bananas did not immediately respond to Fox News’ request for comment.