It’s pretty easy to identify a terrible barbecue restaurant after you’ve eaten there, when your stomach has already soured and your gag reflexes are acting up.

But to recognize a bad barbecue joint before you even sit down? That’s some next-level sorcery.

That kind of foresight belongs only to the most proficient pitmasters and smoked-meat specialists on the barbecue circuit — people like Myron Mixon of Jack’s Old South, Tuffy Stone of Q Barbecue, Tyson Ho of Arrogant Swine, Lucy Buffett of LuLu’s, or Jonathan Fox of Fox Bros. Bar-B-Q. These barbecue pros haven’t eaten a sub-par slab of brisket in ages (outside of judging a brisket contest), and it’s all thanks to their superhuman ability to recognize wretched barbecue just by the smell of the smoke in the air.

For those of you who can’t discern between the scents of mesquite, cherrywood or hickory, the experts were kind enough to share their favorite tips for saving your stomach (and your gag reflexes) from any undue stress brought on by bad 'cue.

These five simple signs will warn you away from an appalling barbecue restaurant:

“I want to see a wood burning smoker blowing and going out in front of the restaurant, or at least smell that wonderful aroma of smoking meats a block away,” explains Lucy Buffett, the restaurateur behind LuLu’s and the author of “Gumbo Love.”

Every one of the chefs and pitmasters agreed that if you can’t see or smell a smoker, there’s a chance you’re being taken for a fool.

“Do you smell the smoke? Is it hickory and oak? If they’re not running the pits while you’re there, it’s a possibility they don’t cook fresh every day,” says Myron Mixon, a Barbecue Hall of Famer and the oft-described “winningest man” in his field.

And yes, it’s true that some barbecue masters will hide their smokers out back, far from any prying eyes that might want to steal their secret recipes. But if a restaurant’s smoker is hidden a little too well, it’s definitely doesn’t bode well for diners.

“You should see a smoker either outside the building or in a smokehouse,” adds Stone, who hosted “BBQ Pitmasters” on Destination America alongside Mixon from 2009–2015. “If they don’t have one, I would be worried.”

Great barbecue calls for a great sauce, but that doesn’t mean it should be drowning in the stuff.

“Meat that is served sauced, swimming with barbecue sauce … I feel like you are trying to cover something up,” says Jonathan Fox, the pitmaster and co-owner of Fox Bros. Bar-B-Q in Atlanta, Ga.

“I went to a well-known place one time and asked for sauce on the side, because I wanted to taste the meat, and I got a look like I was asking for a family secret or something,” remembers Fox. “Needless to say my plate was served sauced. I haven’t been back.”

Mixon, too, named overly-sauced dishes as one of his biggest red flags. “Makes you wonder if the meat’s dry or has no flavor,” he says.

3. The menu highlights the wrong things.

Tyson Ho, who focuses on traditional Carolina whole-hog barbecue at his restaurant in Brooklyn, says he doesn’t trust an eatery that focuses on too many regional styles of barbecue.

“If I walk into barbecue joint and it has Texas brisket, Carolina pulled pork, Memphis ribs, a smorgasbord of styles, I simply walk out,” he says.

Likewise, Mixon tells Fox News he avoids any barbecue joints that try to pass themselves off as whiskey taverns or breweries.

“If I'm looking for great barbecue, I stay away from the establishments that have 200 plus craft beers on tap and 100 different bourbons,” says Mixon. “You need to as, is [this place] a barbecue joint serving beverages, or a bar serving a little barbecue?” 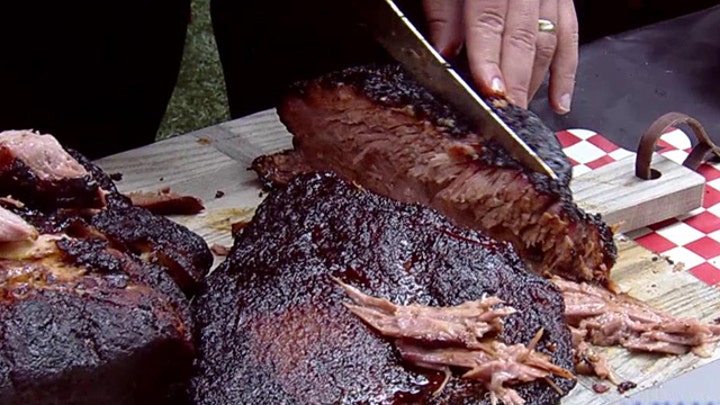 “Another [warning] sign is when they use words like ‘fall off the bone,’ or ‘you don’t need teeth to eat our [barbecue],’ says Fox. “You get where I’m going. If you have to dress it up, it isn’t worth having.”

“When I read the menu, it needs to have a brief description,” adds Mixon, “but it doesn't need ’smoked’ or ‘barbecue’ in the description!”

Last but not least, a great barbecue joint has to serve classic barbecue dishes and sides. It’s fine if the place has a specialty, or they’re well know for one thing, but that’s no reason to ignore everything else.

“I have been to some places that tend to overlook or not put much care into the sides, and I think that’s unfortunate,” he says.

And, of course, Mixon has a strong opinion when it comes to “fancy” menus.

“If the place has a fancy menu with no basic barbecue items like pulled pork, chicken, beans , coleslaw, potato salad …  it’s not a true barbecue place.”