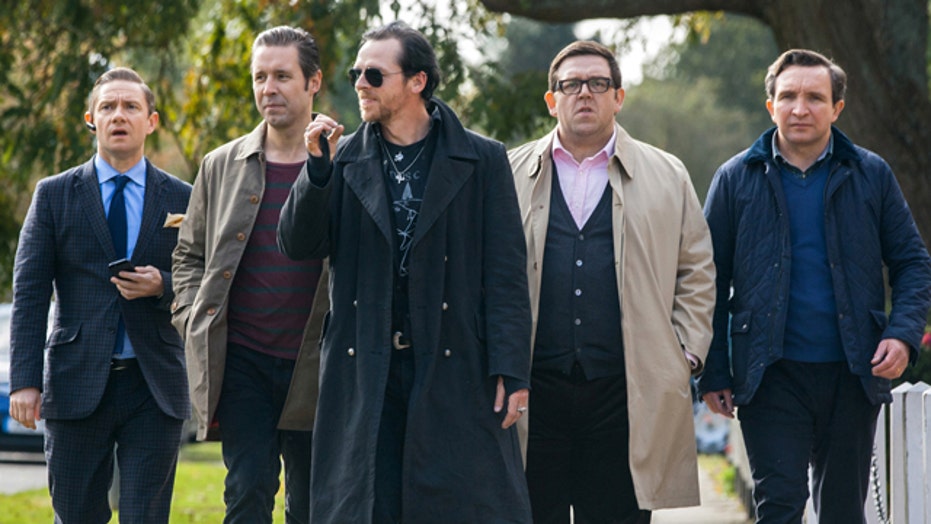 'The World's End' funniest movie of the summer?

T.S. Elliot famously wrote, “This is the way the world ends. Not with a bang, but with a whimper.” For “The World’s End,” Edgar Wright and Simon Pegg’s third entry into their Cornetto trilogy, the world doesn’t end with a whimper, but with ingenious laughter, making this off-the-chart genre-bending comedy the funniest and most original movie of the summer.

Following up their classics “Shaun of the Dead” and “Hot Fuzz,” Wright and Pegg introduce priggish alcoholic Gary King (Pegg), a volatile social deviant forever stuck in his past, constantly attempting to re-live his prime when he and his friends made a failed attempt at an epic pub crawl which should have ended at the infamous The World’s End pub. Gary hits his nadir; a penniless, conniving alcoholic who decides to go on a seemingly suicidal journey to finally complete that epic pub crawl from his youth and finally make it to The World’s End. In doing so, King coerces his reluctant friends to reunite and join him, but as they get to their home town of Newton Haven, they realize that The World’s End is indeed a double entendre as the town’s inhabitants have all been replaced by identical alien robots.

Nick Frost, Paddy Considine, Martin Freeman and Eddie Marsan are King’s buddies, and each brings to the film their own brand of comedy. Frost is excellent as Andy, stubborn and proudly sober, but when things get weird and he throws a few back, Frost is uproariously funny as he sheds his demure outer layer. Freeman plays up the nerdy stereotype nicely while Marsan comically struggles to overcome his timidity and Considine is the hopeless romantic.  Together these actors make up one of the best ensemble casts of the year. It’s a delight to watch them riff off each other one moment then kick alien butt the next.

Rounding out the supporting cast are Rosamund Pike as Freeman’s sister, and the object of affection for all the guys, especially the obnoxious King. Then there’s Pierce Brosnan like you’ve never seen him before. You have to see it to believe it. And for “Harry Potter” and “Game of Thrones” fans, David Bradley makes hilarious appearances as the village drunk.

“The World’s End” forgoes crudeness and raunchiness and instead smartly dissects the blessings of lifelong friendships, nostalgia and the often cruelty of aging. There’s also an incredible sense of identity at play here. While the entire village has been overrun by alien copies, King and his pals fight to retain their identity and their individuality. They ultimately come to fight for all of mankind against assimilation and ironically “togetherness.” The humor is layered in Edgar Wright and Simon Pegg’s pithy dialogue as well as in situations occurring peripherally. Wright makes each frame brim with comedy whether you can see it immediately or not.  Then, of course, plainly on the surface is the irony of robots running amok in a provincial, cookie-cutter English village. Wright’s writing and directing truly captures the spirit of friends reuniting. The banter between the cast is kinetic and natural, deftly bouncing from comedic observations to tender recollections, so much that the audience will feel as if they were part of the anecdote.

Pegg is fantastic as the caustic, vitriolic wild-child hell-bent on making it to The World’s End. He plays this perfectly, expertly balancing being the world’s biggest ignoramus with a touch of empathy. He goes from being a pathological liar and con artist to becoming a clownish hero. This role, among many other wonderful aspects of this film, separates the film from the trashy exploits of movies like “The Hangover.” Wright and Pegg provide an incredible amount of substance here and play with many themes like remorse, regret and reconciliation as well as a brash and raw sense of ending life in the extreme. Not many other recent comedies can claim to combine such strong thematic material within a genre-bending laugher.

“The World’s End” features a bountiful soundtrack of '80s and early '90s UK indie rock like Blur, Primal Scream, The Sisters of Mercy and The Soup Dragons as well as classic tunes from The Doors as Gary and his friends try to recapture their early glory days. There’s also excellent conservative use of special effects. By allowing the robots to look just like people, only really using lighting to show their alieness, frees the film from the restraints of other sci-fi movies and keeps the focus on the story and the characters.

With “The World’s End,” there is so much to uncover that it warrants repeat viewings. Simon Pegg, Edgar Wright and Nick Frost have closed out their trilogy with the best of the lot as well as the best of the summer.