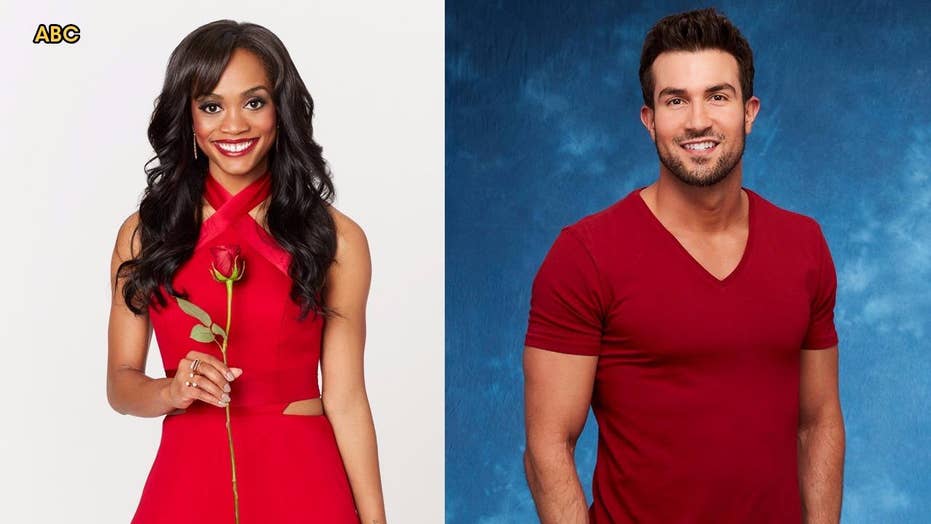 'The Bachelorette' recap: Rachel gets engaged

Fox411: Rachel Lindsay chose Bryan Abasolo as her winner on Monday night's finale of 'The Bachelorette' --and said an ecstatic yes to his marriage proposal

Rachel Lindsay chose Bryan Abasolo as her winner on Monday night's finale of "The Bachelorette"--and said an ecstatic yes to his marriage proposal.

Her other suitors, Eric Bigger and Peter Kraus, got their walking papers on the three-hour ABC finale.

Rachel and Peter, the runner up, had a bitter breakup just short of the finish line.

In a milestone season featuring the first African American woman to star on the show and the most diverse cast of guys ever, Lindsay picked Bryan, whose parents are from Colombia.

The bachelorette joined a live studio audience and host Chris Harrison to watch the final episode of the series.

It picked up from the previous week with Peter still acting commitment-phobic in Spain.

Despite his indecision, he shared the fantasy suite with Rachel.

But after he left their room, Bryan arrived for a date in the vineyards. "I love Rachel tremendously," he told the cameras.

She said in confessional, however, "Peter messed with my mind."

Bryan felt Rachel was distant and confronted her about how things felt "off." But they, too, headed to the fantasy suite.

The bachelorette and Bryan were shown cuddling in bed the morning after.

At the rose ceremony, she sent Eric, the final African American competitor, home.

Eric was devastated as she told him that she had stronger feelings for Bryan and Peter.

Going back to the live studio, Eric joined Rachel and looked different with a full beard.

"You gotta do what you gotta do," good sport Eric told Rachel about failing to win her heart. He said Rachel had made a man of him.

Rachel and Bryan rode in a hot air balloon in Spain and he vowed to the cameras that he would propose to her.

"It would be a mistake if you didn't choose me. I just love you," Bryan told her.

The Colombian-American chiropractor gave Rachel a gift of a Spanish dictionary and he told her how to say husband and wife in the language.

Then, Rachel and Peter had their final date, in which he told her, "I don’t think I’m ready to ask you to marry me tomorrow but I don’t want to stop being with you."

He said he'd propose to her if she wanted him too—which was what Rachel didn't want to hear.

"I will give you an amazing life," Peter said.

Rachel sighed, "I want someone who knows what they want to do."

“Great. Go find someone to have a mediocre life with," Peter snapped.

Rachel told him she didn't want only a boyfriend but a fiancé at the end of the show, so he said, "Then I have to wish you the very best….if you change your mind, you know where you can find me."

Both crying, they hugged and kissed and then parted ways.

Peter sobbed like a baby alone in his room and said, "What is wrong with me?"

In studio, Peter joined the pretty attorney for an interview and she said she was still confused by his behavior.

"I don't think this show is for you. You need more time," to decide about commitment, she told Peter.

He apologized for the mediocre life comment on the show and Rachel snapped, "I'm living my best life."

Then Peter claimed, "I feel attacked."

He said he'd never wanted to waste her time, and despite the hard feelings, they wished each other the best.

Finally, viewers saw the moment they were waiting for—as the cameras went back in time to Spain, where Bryan selected a diamond engagement ring and Rachel stood outside a Spanish castle waiting anxiously for him to arrive.

In Spanish, Bryan told her that she was so pretty.

"You're everything I could ever want in a woman, a wife, the mother of my children," he told her.

Rachel told him, "I see my forever…I love you."

Bryan said got down on one knee; he asked her to marry him and she shouted yes.

"I’m going to make you the happiest wife in the world," he said in Spanish.

Bryan joined Rachel in front of the studio audience and got down on one knee again to re-propose and put the ring back on her finger.

Bryan said Rachel and his strong mother got along great.

The engaged bachelorette laughed that she was going to study her Spanish dictionary as well!

The two said a winter wedding might be in the offing—but want to get to know each other out of the spotlight first.