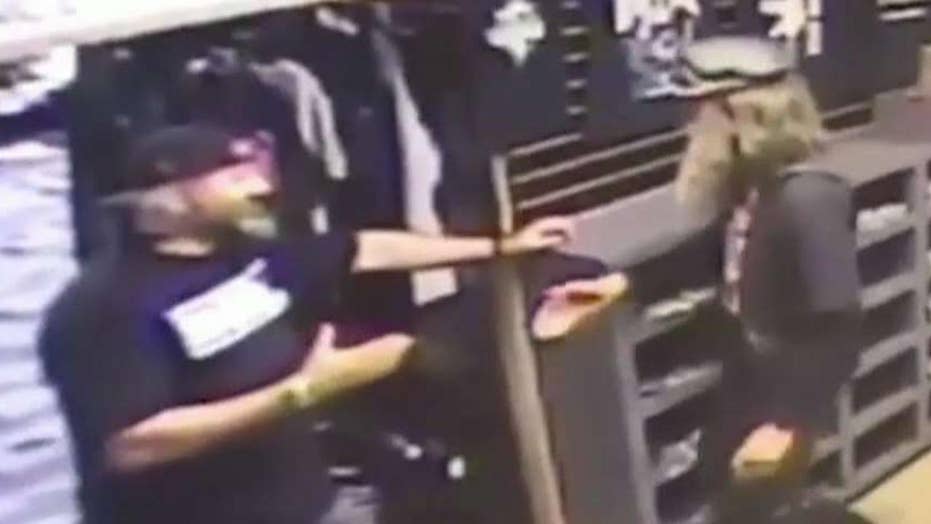 Norris Sweidan says the comedian fled his California store in 2017 when he was called out for being the 'Borat' actor.

Sacha Baron Cohen has been making headlines for his pranks on his Showtime series “Who Is America?” However, in February 2017, a gun store owner wasn’t fooled by the actor’s antics.

A Riverside, Calif., gun store, Warrior One Guns & Ammo, agreed to participate in a documentary about a Hungarian immigrant wanting to buy a gun in the United States. But when the store’s owner, Norris Sweidan, finally saw the film's subject in question, he quickly realized he was getting duped.

The whole event was caught on the store's surveillance camera.

“He comes in, off the bat you can see in the video I’m looking like, this guy does not look like an Hungarian immigrant. Tight-a-- leather pants, a beard, it just didn’t fit,” he told FOX 11. “The moment his words came out of his mouth I was like, ‘this guy is full of s---.”

When Cohen, in full disguise, asked to buy a gun, Sweidan says he immediately recognized the voice and called the celebrity prankster out.

“I’m looking at the producer and I’m just like, ‘Am I being fooled right here?’” he said. “And I just kept looking at the guy and I was like, you’re Borat,’” he said, recognizing Cohen from his 2006 film.

Sweidan said that as soon as the actor realized he was identified, he immediately turned and exited the store, leaving his camera crew behind. When Sweidan turned to the producers for answers that they weren’t able to give him, Sweidan said he'd finally had enough and threw them all out of his store.

“Once I knew it was Borat, we already know his game and his bulls---. So, we knew he’s here to make a mockery, and of what? Gun owners? The gun business? Gun shops?”

The incident was likely meant to be a segment on “Who Is America,” which premiered on Showtime this week. As previously reported, the series sees Cohen disguising himself and tricking people into going along with segments in order to make fools out of them.

Most recently, he tricked several gun rights activists and congressmen into appearing in a fake ad for a program that would arm students as young as 4 years old in a mock effort to curtail school shootings.

He has reportedly also tricked Sarah Palin, Ted Koppel, Roy Moore, Joe Arpaio and more into appearing on the show. However, despite the big names he tricked into being on the show, its Showtime premiere only drew a disappointing 327,000 total viewers and a 0.1 rating among the key demographic of adults age 18-49, according to Deadline.

“He was fake, the producers were fake, the show was fake, and Showtime is fake to be honest with you,” Sweidan concluded. “They want a real story, come talk to us. We'll give you a real story.”

Click here for more on this story from FOX 11.