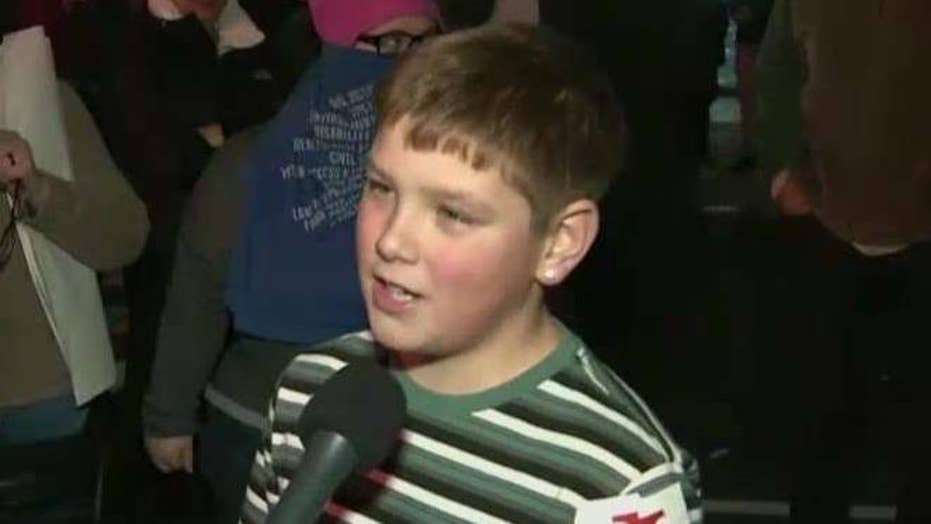 Protesters - some very young and old - cause havoc and a brief fire outside the National Press Club and 'Deploraball' event as they vow to resist the Trump administration. Griff Jenkins reports #Tucker

Drew Carey's 11-year-old son may be in big trouble.

Connor Carey is reportedly the young protester in a Fox News video of an inauguration rally in Washington, D.C., where protesters were seen burning signs.

The 11-year-old, who identifies himself as Connor, told Fox News' Griff Jenkins he "kind of started this fire" because "I felt like it and because I'm just saying 'screw our president.'"

Drew Carey participated in the inauguration in a very different way from his son. The 58-year-old emceed the Veterans Inaugural Ball: Salute to Heroes hosted by The American Legion on Jan. 20.

The "Price is Right" host did not seem to be aware of his son's participation in the protest that night. TMZ caught up with him and he told the gossip site he was "just having dinner with my kid down the street" and wanted to see the protest.

A source told TMZ that Connor Carey "regretted his words" after speaking with his parents, who were upset with their son's actions.