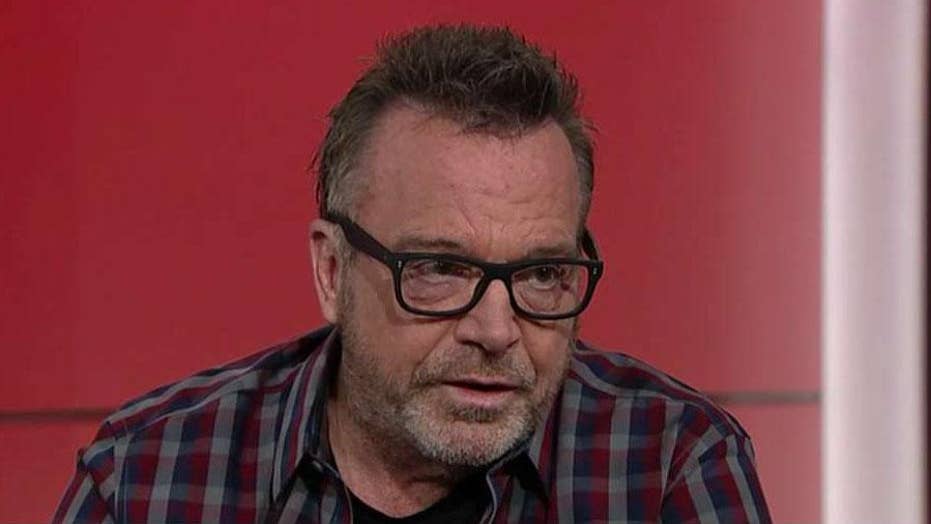 Actor and comedian talks about his new show 'The Hunt for the Trump Tapes.'

Donald Trump Jr. had some strong words for actor Tom Arnold Friday after he lamented that the president's eldest son and his brother Eric weren't robbed.

"No we just get daily death threats and exploding packages of white powder sent to our homes you piece of garbage," Trump Jr. tweeted on Friday.

Their exchange emanated from President Trump's decision to tweet about an attempted robbery at the home of Rep. Elijah Cummings, D-Md., whose district Trump has criticized as "a disgusting, rat and rodent infested mess."

Trump received backlash from his own former United Nations ambassador Nikki Haley as well as Sen. Cory Booker, D-N.J. over that tweet. "This is so unnecessary," Haley tweeted with an eyeroll emoji.

Trump's critics appeared to see his tweet as an attempt to reinforce his argument that Baltimore was a "very dangerous & filthy place."

Arnold seemed to want to make the issue personal by invoking the president's sons Eric and Don. "Don Jr’s NYC apartment has not been robbed yet! Eric Trump’s either! Really bad news!!" he tweeted.

As Trump Jr. mentioned, he and other members of the Trump family have received numerous threats after his father took the White House. Back in 2018, Trump's then-wife Vanessa went to the hospital after opening a letter that contained white powder.

Arnold has a long history of anti-Trump activism, calling him "racist" and a "knucklehead," among other things. The 60-year-old actor also caught headlines when he leaked a phone conversation between him and Trump's embattled former attorney Michael Cohen.

TOM ARNOLD SAYS ROSEANNE 'WASN'T RACIST' WHEN HE WAS WITH HER

At the end of 2018, Arnold revealed that he received a visit from the Secret Service after challenging the president to a fight. Arnold was cooperative with the agents and explained that he understood the ramifications of his posts.

"I did see a crazy reaction to it from people," Arnold admitted. "I get a lot of death threats. There's a certain element — I don't know if they're bots — I just ignore it ... But I also see how they take something and they blow it up like, 'He is literally threatening to ...' And I find that absurd, but I can see how obviously if people are tweeting ... they can call you guys and have you come over. That's ridiculous, but I understand why you're here."