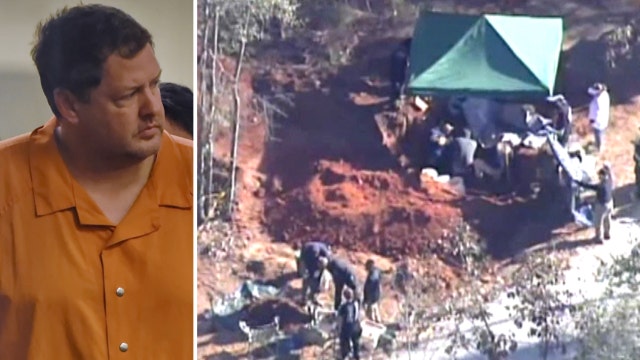 In 2017, the now-48-year-old pleaded guilty to seven counts of murder for killings that took place over more than a decade, all as he ran a real estate business. He was sentenced to life in prison but, if he is to be believed, there are more victims who have yet to be discovered.

“Why does any killer open up? They get lonely. No one is communicating with them. And Maria, to her advantage, is a woman."

“I believe him,” Douglas told Fox News. “He’s very specific and detailed. He also likes to boast about his skills, his violence. He’s also incredibly intelligent… Unfortunately, the correction officers will not let him out so we can tell right away whether he is truthful or not.

"But why won’t they make a deal with him? Why don’t you get the prosecutor to make a deal with him? He’s got life in prison. Show him or tell him that if you find these bodies, you won’t charge him with the death penalty. They didn’t. Police are saying they don’t have any missing persons, but it’s frustrating.”

John Douglas (center) believes there are more victims out there. (ID)

“What if these people aren’t necessarily from your town?” continued the 74-year-old. “What if they were from another town, another area? I think this is an opportunity to clear cases, so it is frustrating. And I believe him. Unfortunately, the police didn’t follow up, didn’t really dig deeper into this."

In 2017, the Herald-Journal of Spartanburg reported that, in an eight-page letter, Kohlhepp wrote that he tried to tell investigators and informed the FBI about his other alleged victims but, he said, “it was blown off.”

He also wrote, “At this point, I really don’t see a reason to give numbers or locations.”

Todd Kohlhepp would ultimately plead guilty to the murders of Carver and six others over 13 years and was handed seven consecutive life sentences without the possibility of parole. (ID)

At the time, Don Wood, chief division counsel with the FBI’s Columbia office, said the agency had a pending investigation, but wouldn’t comment specifically on what the FBI was doing.

Douglas has spent his career interviewing some of the most horrific serial killers of all time, including Ted Bundy, Charles Manson, Edmund Kemper, and “BTK” Dennis Rader, among others. He participated in “Serial Killer: Devil Unchained” to weigh in on Kohlhepp’s case.

“I was involved with the investigation when four people were killed in a motorcycle shop in South Carolina [in 2003],” Douglas explained. “After I did a local presentation, these police officers approached me and asked if I could help them with a case… They sent me the material, I went through it and explained my analysis to them… I always felt the person responsible would have told someone over the years.”

Kohlhepp’s string of crimes was uncovered in 2016 after police rescued a woman chained at the neck in a storage container and an investigator found a body buried in a shallow grave. The woman, Kala Brown, told investigators she saw Kohlhepp shoot and kill her boyfriend, who went with her for a cleaning job on the suspect’s property.

According to the docuseries, Brown spent a grueling 65 days in captivity after being reported missing for over two months. She was discovered after investigators were following up on a tip regarding a potential sex crime.

While in custody, Kohlhepp came clean to authorities about the quadruple murder of Beverly Buy, Scott Ponder, Brian Lucas and Chris Sherbert — all shot to death in 2003 in a Superbike Motorsports location. Additionally, Kohlhepp would be charged in connection with the deaths of Johnny and Meagan Coxie; the bodies were recovered in 2016 from Kohlhepp’s property while authorities were rescuing Brown.

These discoveries would count as Kohlhepp’s sixth and seventh murder charges. However, the limited series took a dramatic turn when producer Maria Awes received a phone call from Kohlhepp, who claimed he murdered more than his seven victims. That prompted Awes, as well as Douglas and Kohlhepp’s biographer Gary Garrett to further probe the convicted killer’s background in pursuit of the truth.

“Why does any killer open up?” said Douglas. “They get lonely. No one is communicating with them. And Maria, to her advantage, is a woman. She showed empathy for him to better understand him. And he got to meet her face-to-face… So he really opened up to her.

"With me, he initially wasn’t very complimentary…. But with Maria, he opened up and provided a wealth of information about himself and the crimes. And Maria also believes he is truthful and that there are other crimes out there that he could bring some closure to.”

Douglas also pointed out that one should take a closer look at Kohlhepp’s early life. According to Good Housekeeping, Kohlhepp was just a toddler when his parents divorced and he spent his early childhood living with his mother and stepfather.

By the time he was 12, it was decided he should live with his father. At age 15, he kidnapped a 14-year-old girl and brought her back to his father’s home, where he bound and raped her at gunpoint. He was quickly arrested and charged with kidnapping and sexual assault. He was sentenced to 15 years in prison.

From a very young age, Kohlhepp exhibited violent behavior, including attacking other children and poisoning his pet fish with bleach, the outlet shared. A neighbor would later describe him as a “devil on a chain.” A memo detailing a psychiatric evaluation noted that Kohlhepp received counseling from around age 9 and as a juvenile threatened suicide.

A neighbor told a probation officer that Todd locked her son in a dog kennel cage and rolled it over and over and "despite the fact that her son was crying and screaming, Todd was laughing." Another time, she said Kohlhepp banged her son's head against clay pipes.

The limited series took a dramatic turn when producer Maria Awes received a phone call from Kohlhepp, who claimed he murdered more than his seven victims. — ID

“We can see the creation and the making of a criminal,” said Douglas. “If there’s no intervention early on, then it should be no surprise to the community, to law enforcement that someone like Todd Kohlhepp would perpetuate some violent acts.

"I don’t mean every child who is brought up in some dysfunctional family will grow up to be a violent anything. But what I can say and what I do know is that from all the people I’ve interviewed over the years is they did not come from a loving, nurturing environment or family. There was abandonment. There was a type of abuse. There was a type of neglect going on… But it was very predictable after you see these early indicators.”

Douglas said he hopes the docuseries will compel investigators to reexamine Kohlhepp’s claims and possibly bring closure to other cold cases.