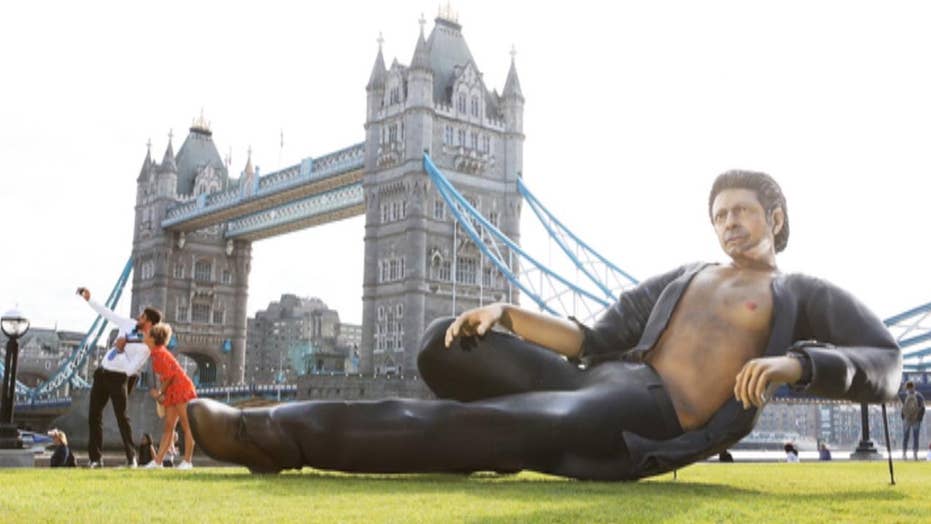 Top Talkers: A 25-foot statue of a bare-chested Goldblum commemorate the 25th anniversary of 'Jurassic Park.'

While the dinosaurs in “Jurassic Park” may not have aged well, Jeff Goldblum’s glazed torso as Dr. Ian Malcolm still shines brightly.

Now TV, a U.K. streaming service, sanctioned the construction of a dinosaur-sized Jeff Goldblum monument in his memorable semi-supine pose from 1993's "Jurassic Park" with his exposed chest in all of its glory, for the 25th anniversary of the sci-fi staple.

Although the anniversary was officially on June 11, the sculpture was placed in front of the iconic Tower Bridge in London on Wednesday.

Like the shot of the partly shirtless Goldblum, which is so peculiar because he looks so magnificent despite the fact his character had just broken his leg, the statue is too huge to fully absorb at a glance.

According to CNET, it stands at over 9.8 feet tall, 23 feet long and weighs 331 pounds. Bringing it to life took a substantial amount of man hours: 250 hours over six weeks.

Describing how the scene came to be in an interview with IGN, the now-65-year-old actor vaguely recalled director Steven Spielberg slyly asking him to unbutton and to rub oil on his chest.

Goldblum welcomes his transcendence as a meme.

"It's great, the human body is beautiful in all ways," Goldblum told the Press Association earlier this year.

He even rocked the look when he accepted his star on the Hollywood Walk of Fame in June, although he was clothed.

Goldblum reprised his role as Dr. Ian Malcolm in the second installment of the new “Jurassic Park” film series, “Jurassic World: Fallen Kingdom,” which is currently in theaters.

A rep for Goldblum did not immediately respond to Fox News' request for comment.