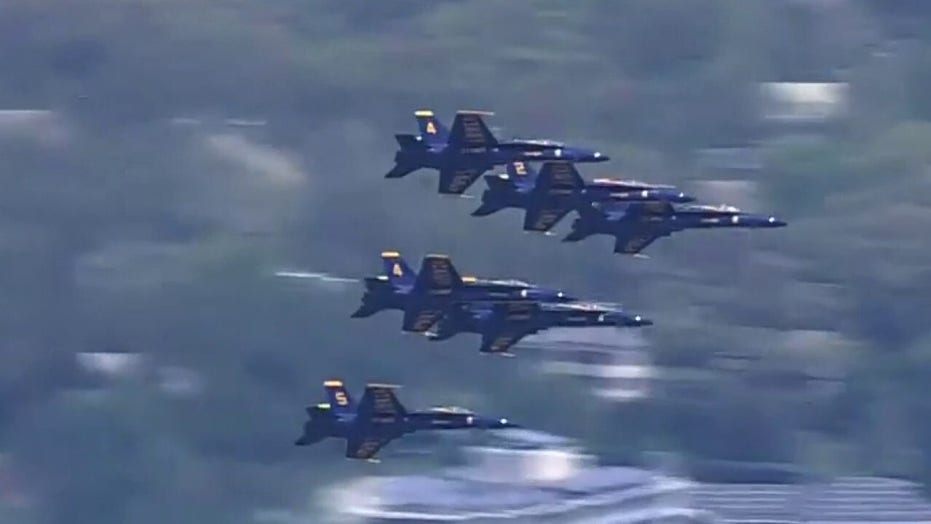 Thunderbirds director of operations on flyovers to honor COVID-19 workers

Lt. Col. Kevin DiFalco on the importance of boosting morale during coronavirus pandemic.

Loretta Swit has been using her time indoors during the coronavirus pandemic doing the one thing she loves -- raising awareness about our heroes.

“The volunteers, caregivers and first responders who are the front of the trenches -- they are our heartbeat. Our lifeline,” the actress told Fox News.

“The times are challenging, but we are tough,” the “M*A*S*H” star continued. “I have been networking. I have been shooting PSAs on my iPhone for New York City -- the city I love, for the ASPCA and Ayla’s Acres for my love of animals, and Paws for Purple Hearts [because] I love veterans, POWs and [our] military.”

The 82-year-old, who famously played Major Margaret “Hot Lips” Houlihan in the hit ‘70s series, said that her experience working at Ground Zero after September 11 has left “my faith intact and invulnerable” during tough times.

“[I remember] outside of Javits Center were booths with cooking facilities backed by trucks and wagons that had come to New York City from all across the country,” she reflected. “We served burgers, barbecue, coffee and soda. The line was endless, each shift replacing the next. Inside the center, a shift was lying down, resting, sleeping, gearing up for the next bout. The cooking, feeding and rest periods never stopped. It was a seamless line of dedicated, caring people.

“We brought hot coffee over to Ground Zero, wearing gas masks and a slew of IDs hanging around our necks,” she continued. “Parts of the building that still stood were being pulled down. The dust clouds in the air were a fog. We would burn our clothes whenever the day finished, usually early morning hours, fatigue and adrenaline working with and against the other.

“[But] I’ll never forget those people--ever. I saw how we pulled together into one strong, resilient family. I remember a newspaper headline in Paris read ‘Today We Are All Americans.’ Well today, we are all family.”

Swit is currently in New York City. It is the epicenter of the coronavirus outbreak in the U.S., but has never considered leaving behind her beloved city.

Loretta Swit said she is proud to be in New York City. (Photo by Michael Tullberg/Getty Images)

“New York is where I want to be in a crisis,” she explained. “I am grateful to be here in New York City. You can find me [every day] at 7 p.m. singing, stomping or banging on a pot saluting those brave people saving lives and protecting ours.

“We are [also] being guided by a wise, compassionate governor who tells us the truth and only deals with facts, figures, experience and science,” added Swit, referring to New York Governor Andrew Cuomo.

As far as cabin fever goes, Swit insisted she has found plenty of ways to keep busy at home while staying in touch with loved ones.

“Technology has never been more valuable as we reach out with distant embraces,” she said. “Little has changed in my regimen. I do 20 minutes of exercise daily-- have for years. I am putting lots of energy into sanitizing the flat with elbow grease I have not used before… And I have always enjoyed cooking. I’m vegan, so I tend to experiment with some spicy creativity. I enjoy the process and the meal.”

Swit said she had one special message for fans who are currently seeking a glimmer of hope as each day unfolds.

“The mantra here in New York is ‘I count the days, make the days count,’” she explained. “… I can do something. And because I cannot do everything, I will not refuse to do something that I can do. Eleanor Roosevelt, my personal favorite, once said, ‘Look fear in the face. Do the thing you think you cannot do.’ I believe in our goodness. I believe that goodness is the most powerful force in the world.”

Back in 2017, Swit told Fox News that decades later, she and her “M*A*S*H” co-stars are closer than ever.

“We might as well be joined at the hip!” said Swit. “We see each other quite frequently… Every time we lose a comrade, it’s a body blow. We feel it harshly, badly. People always ask me, ‘Do you ever see them?’ When do I not see them?! These aren’t casual acquaintances from years ago. This is my family… So much of my life can be credited to my family.”