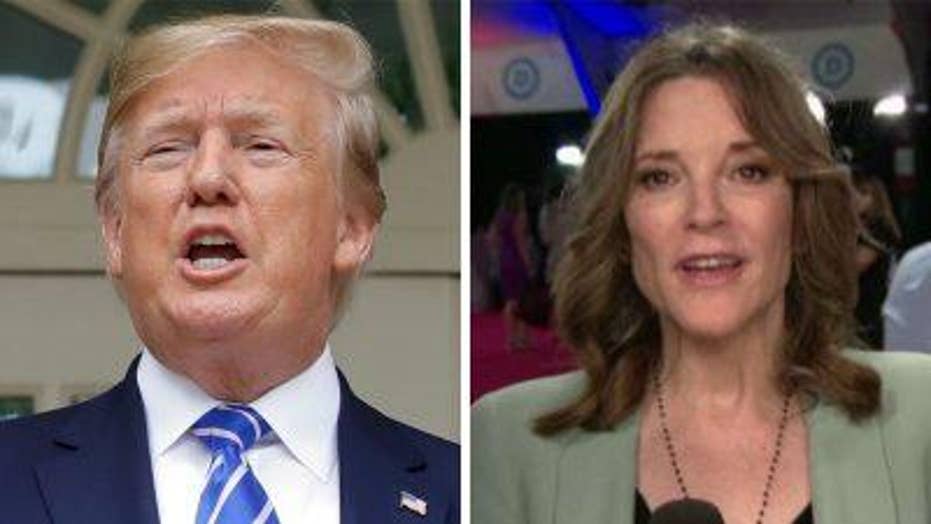 It seems "Real Time" host Bill Maher has drastically changed his view of 2020 Democratic presidential candidate Marianne Williamson, the author and spiritual guru who he previously urged to "get the f--- out" of the race.

Before going on a monthlong hiatus in late June, Maher listed 10 candidates who he believed should drop out following the first round of Democratic debates. Williamson was one of them. (The others were Michael Bennet, Bill de Blasio, John Delaney, Kirsten Gillibrand, John Hickenlooper, Tim Ryan, Beto O'Rourke, Andrew Yang -- and Eric Swalwell, the only one in the group who has dropped out.)

But during Williamson's appearance on "Real Time" Friday night, Maher seemed much more excited about her candidacy, telling her she's "too interesting to run for president."

"I think it's interesting because people are just coming to you through politics," he told her. "I'm old enough to remember -- you've been around, you're big! You were Oprah's spiritual adviser!"

"I don't know about that," Williamson responded, "but she was very generous to me, that's for sure."

Marianne Williamson's candidacy now seems to interest comedian Bill Maher, who previously spoke of her as an also-ran.

The HBO star praised Williamson's debate performances, telling her she "always goes to the root of things" about the issues.

"I love that. Everyone else is talking surface," Maher said, "and you say, 'What about immigration? Let's talk about why they're coming here,' ... and health. You and I are simpatico on health. ... What you say is what I've always said! We're never gonna fix this health care crisis because we don't ask about why people are so sick!"

"In the 21st-century mindset," she continued, "we have a far more whole person, holistic understanding of things. We understand that there's effect, but there's also a cause. There's external symptoms, but there's also what people feel, what people think. There are underlining forces and dynamics in peoples lives that must be addressed if we are to transform one life. And all a nation is, is a group of individuals."

She added, "There's a 21st-century political conversation that the old establishment doesn't seem to understand, but -- what's most dangerous now -- doesn't seem to be open to. And that must change or we will not beat Trump and we will not bring forth a future that we want for our country."

Maher also defended Williamson over her scrutinized views on anti-depressants, saying "I agree with everything."