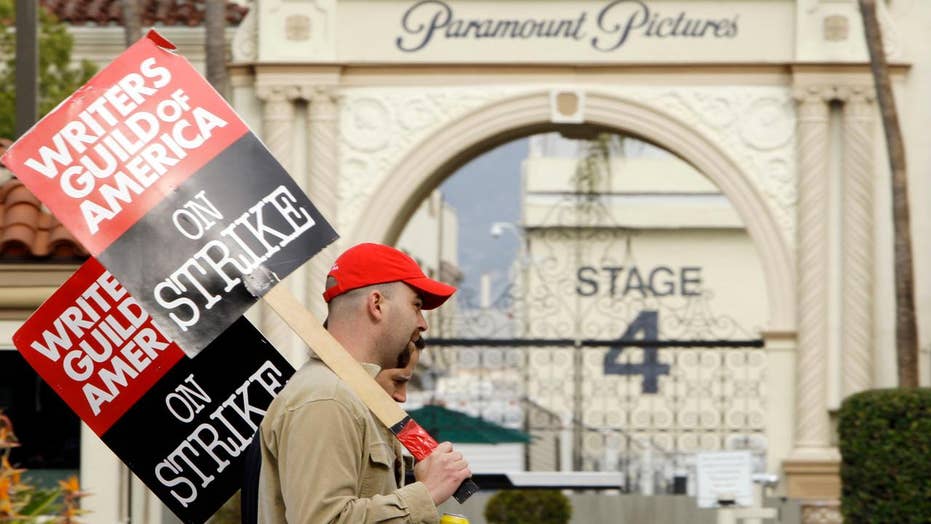 How would writers' strike affect your TV watching?

LOS ANGELES – If there is one person who is looking forward to a writers strike, it would be President Donald Trump.

The Writers Guild of America is threatening to strike if they can’t cut a deal with some of the biggest studios in the business. And if that happens, popular late-night programming like The Late Show with Stephen Colbert and The Daily Show with Trevor Noah and weekly shows like Saturday Night Live could be the first ones to go dark.

These shows have been fixated on lampooning the president – poking fun at him night after night and, in the case of Saturday Night Live, centering its shows around a public takedown of President Trump.

But those shows could go on hiatus a deal isn’t reached soon.

HOLLYWOOD BRACES FOR ANOTHER WRITERS STRIKE

“If there is a strike what viewers would see is a ripple effect,” said Jonathan Handel, an entertainment lawyer and contributing editor for the Hollywood Reporter. “The late night shows which are scripted on a day-to-day basis…would immediately go to an improv kind of a situation and a sort of an awkwardness. Then, you’re talking about the weekly shows Saturday Night Live, for example, which could go dark or into re-runs.”

That would be a boon for Trump, who has repeatedly lashed out at SNL for making fun of him and members of his administration.

.@NBCNews is bad but Saturday Night Live is the worst of NBC. Not funny, cast is terrible, always a complete hit job. Really bad television!

The Writer’s Guild of America voted on Monday to move forward with a strike if it doesn’t get what it wants out of negotiations with the AMPTP. The two parties returned to the table on Tuesday and they have a week to figure out a compromise and sign a new contract before the writers go on strike.

Handel said it’s difficult to tell whether a deal can be reached next week.

“Two weeks ago, there was a 3 to 1 ratio between what the writers wanted and what the studios were willing to give. There was a $350 million gap,” he said. “Where we are now in terms of a hard dollar figure is very hard to know – which is part of what makes it hard to know if we’re going down the path to a strike or to a deal.”

The number of TV shows out there is at an all-time high, but writers aren’t happy because their wages have dropped by over 20 percent. Members of the WGA say they are making less money because studios are producing fewer episodes per season which is a problem for writers that get paid per episode.

Most writers have exclusivity contracts that prevent them from picking up extra work and writing for other shows – which means they can’t make up the difference.

“There is an irony to the so-called ‘Peak TV.’ The fact that the number of scripted TV shows has basically doubled in the last year or so,” Handel said. “It’s a disconnect in two ways: One is writers get paid for writing fewer episodes. The other is that even on these shorter series they get held on exclusivity. They get put on ice, not working for the entirety of the rest of the year.”

Overall the Guild says its demands would cost the entire industry about $178 million dollars.

But if writers go on strike the cost could be much more for writers and studios.

Scripted shows scheduled to premiere this fall could see their debuts delayed and fans of The Walking Dead and American Horror Story might get fewer episodes because of the strike.

Summer TV would look a lot more familiar with airtime being filled with more re-runs and reality shows until writers and studios are able to work things out.

Overall a strike is bad news for production studios, writers, and viewers. But its great news for network TVs biggest rivals – Netflix and Hulu.

Streaming services could see a big boost in traffic as people switch to streaming new shows online instead of sitting through re-runs.

But Handel said studios won’t be entirely crippled by a potential strike.

“The studios have a lot of ability to make lemonade out of lemons in this situation,” Handel said. “Most of them are units of much larger companies so a strike doesn’t necessarily move the needle materially in terms of what the investment community looks at.”