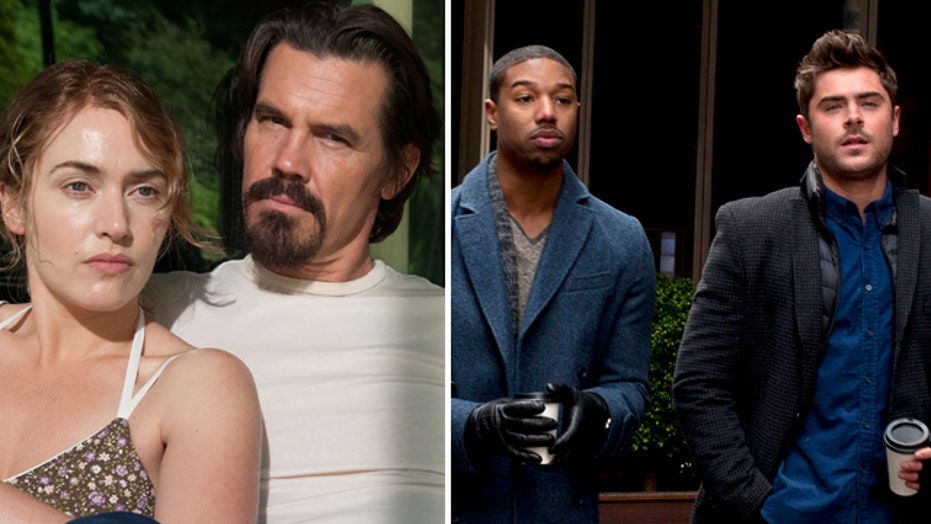 This week's movies: Romance vs. 'bro-mance'

This isn’t top tier work for anyone involved, but since Maynard’s novel just had to be adapted into a film, it is fortunately made with Reitman’s indelible class and restraint.

Winslet is single mother Adele, a jilted divorcee who suffers from agoraphobia. She hardly leaves her home and on the rare occasion she does venture outside, Adele suffers from anxiety attacks, thus prompting her 13-year-old son Henry (Griffith) to become the “man-of-the-house.”  In an ironic twist of fate over Labor Day weekend, Henry encourages Adele to accompany him to the store only to be kidnapped by Frank, an injured escapee from a nearby prison. Frank whisks a panicked Adele and a surprisingly composed and curious Henry back to their home to hole up while the police begin their search. But unlike your ordinary, no-good, very bad hostage-taker, Frank is a rather nice guy. He cleans the house, replaces light fixtures, does mechanical work on their car… and bakes pies. He slightly breaks Adele of her agoraphobia and rekindles within her a deeply stifled burning passion. He teaches Henry about women, cooking and fixing engine blocks, in essence becoming the father Henry always wanted and the husband of Adele’s dreams. But a question lingers: is Frank a lover or a lady-killer? As the bond between Frank, Henry and Adele tightens, so does the noose as neighbors become suspicious and the police close in.

Reitman has mastered the intimate drama with “Up in the Air” and “Juno” and with him at the helm – as well as scripting – the director nicely tempers the melodrama, thus saving this from something typically relegated to Lifetime. Reitman, along with his fine actors, focus on a slow, tense burn, occasionally billowing emotional flames between Winslet and Brolin. But the real heart of the film lies with young Henry. The story is told from his point of view -- including an irritating narration by Tobey Maguire as Old Henry – as the young, precocious boy walks a delicate line of admiration and fear of Frank. To Henry, he’s a super-man, the complete opposite of his bland father (Clark Gregg), which opens the question to which upbringing is more suitable to a youngster.

Griffith outshines veterans Winslet and Brolin, carrying the weight of the film mostly on his shoulders. He should be added to the short list of young actors graced with natural talent at such a young age. The strain of a child torn between parents – a father with a new “perfect” family and his emotionally fragile and over-protective mother, as well as the fascination with this mystery man -- is all displayed in Griffith’s sullen face and highly expressive eyes.

Winslet often brings Adele to the brink of a mental breakdown, allowing the Oscar-winner a handful of juicy moments to show us her craft. This isn’t her strongest role but she is such a master that you won’t be able to take your eyes off her. Brolin, too, is excellent, creating a sense of mystery around his Mr. Perfect (with a criminal record). Reitman regular J.K Simmons rounds out the cast alongside Clark Gregg, Maika Monroe and James Van Der Beek.

But in the end, “Labor Day” is squandered by two major setbacks: first, a grotesquely over-sentimental climax that undoes all of Reitman’s wonderful restraint and second, a surprisingly antiquated view of women – especially for a film made today. Though the book is written by Joyce Maynard, “Labor Day” suffers from the age-old plotline that a crestfallen woman is seemingly emotionally paralyzed and incapable of helping herself until Prince Charming comes to the rescue. As the film progresses, it would seem that Reitman is going to turn that trope on its head but he never does.

Haven’t they learned anything from Disney’s “Frozen?”