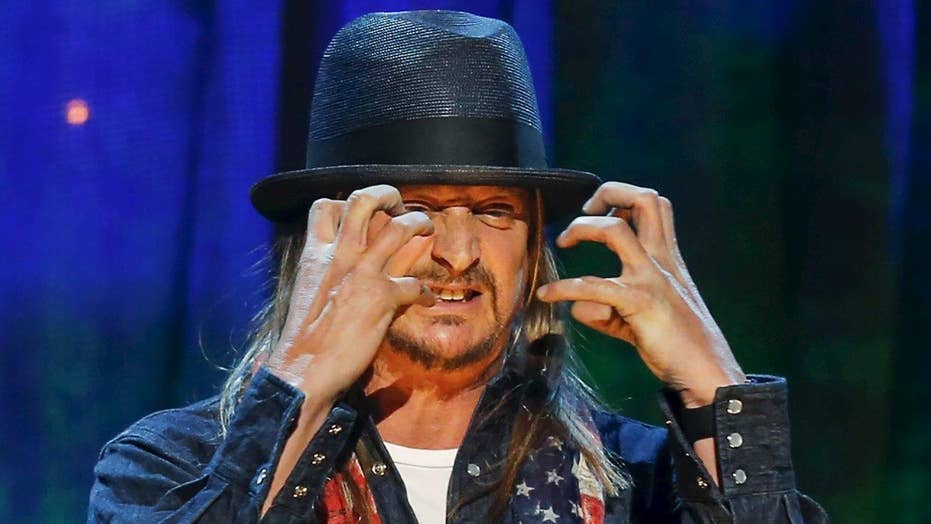 Four4Four: Kid Rock blasted Colin Kaepernick during his concert and added the 'Star Spangled Banner' to his set list

Kid Rock had three words to say about Colin Kaepernick's decision to kneel during the National Anthem.

In a new video of his Friday concert at Fenway Park in Boston, the singer stopped in the middle of singing "Born Free" to say "F--k Colin Kaepernick."

The crowd went wild while Rock continued to perform in front of a giant American flag.

The rocker isn't the first celebrity to speak out against the San Francisco 49ers quarterback.

Over the weekend, KISS took aim at the football player on their "Freedom to Rock" tour.

"In case you didn't know this tour is called the 'Freedom to Rock [tour]," KISS' Paul Stanley said on stage. "A lot of times people that are born free think that freedom is free and it's not. Freedom is only free because there are people willing to sacrifice to keep us free."

He then announced a $150,000 donation to "Hiring our heroes" which helps veterans find employment.

Kaepernick set off a firestorm of controversy when he refused to stand during the National Anthem prior to a preseason game last month.

"I am not going to stand up to show pride in a flag for a country that oppresses black people and people of color," Kaepernick told NFL Media. "To me, this is bigger than football and it would be selfish on my part to look the other way."

Kaepernick was joined by teammate Eric Reid in kneeling during the National Anthem before the 49ers' game Monday night. Several other players around the league took part in similar protests on opening weekend.

Four Miami Dolphins players — Arian Foster, Jelani Jenkins,  Michael Thomas and Kenny Stills — went down on their right knee as the Anthem was played before the Dolphins' 12-10 loss to the Seahawks in Seattle on Sunday. Model Kate Upton called the players' protest disgraceful.

"South Park," which never misses an opportunity to weigh in on a controversy, released a promo for their new season featuring a song that makes fun of Black Lives Matter supporters who have rallied behind San Francisco 49er backup quarterback Colin Kaepernick.