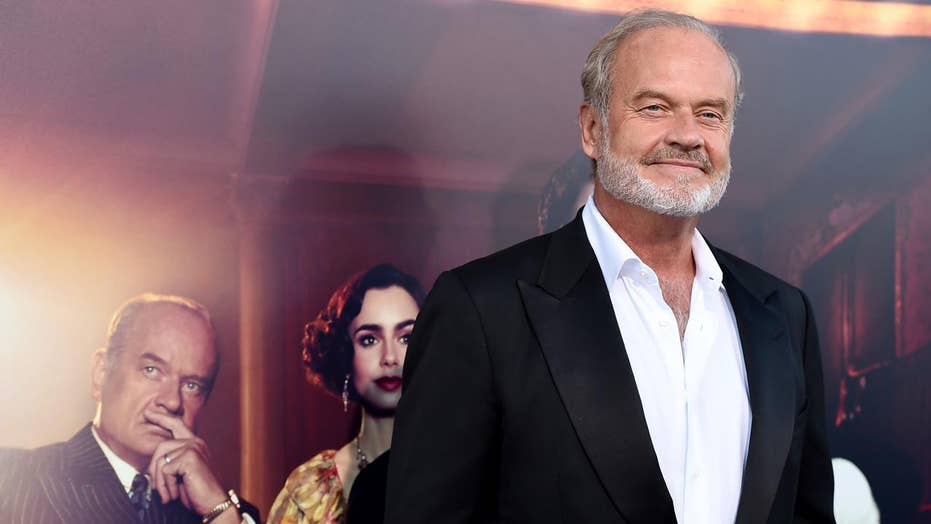 Kelsey Grammer has no plans of slowing down

Fox411: 'Frasier' star Kelsey Grammer is keeping busy, starring in a new Amazon series 'The Last Tycoon,' embarking on his London stage debut and lanuching his own brewery in the next few months

Kelsey Grammer has zero plans to slow down anytime soon.

The 62-year-old actor is starring in a new series on Amazon titled “The Last Tycoon,” a drama based on F. Scott Fitzgerald’s final unfinished novel, as movie studio boss Pat Brady, who was modeled after real-life ruthless mogul Louis B. Mayer.

And while stepping back in time to the 1930s alongside co-stars Matt Bomer and Lily Collins should keep Grammar busy, he’s also embarking on making his London stage debut later this year, performing at LA Opera early next year and launching his own brewery within two months. If that’s not enough, the proud parent welcomed his seventh child in 2016.

Fox News spoke with Grammer about “The Last Tycoon,” his lasting success, and whether fans can expect a "Frasier" reunion:

Fox News: What was it about ‘The Last Tycoon’ and your character Pat Brady that drew you in as an actor?
Kelsey Grammer: The first thing that always draws me in is when somebody offers me a job. Then, I take the time to actually read the script. Which, after upon reading it, I actually thought it was pretty good. I thought that Pat showed real potential in terms of where he might go.

I liked what seemed to be this guy who’s struggling with who he is at his core and who he has to be in order to survive. Billy and I talked about where the character might be headed and the sort of thing that was going to be happening. And I thought this is something I can play. Something exactly I haven’t played before, which is always part of my criteria in choosing a role.

Fox News: How was it working with Lily Collins?
Grammer: Oh, she’s great! I love Lily. She’s wonderful, available, she’s got the chops. She’s a young woman with substance. I enjoyed working with her. And it’s fun for her to play my daughter.

Fox News: In one interview, you said that while the both of you were getting ready to shoot, her father’s [Phil Collins] music would suddenly play in your mind.
Grammer: Yeah, I told her that about a couple of shows in. I said, ‘You know, it’s funny. Whenever you sit down, I can hear one of your dad’s tunes.’ And they vary! His contributions to music is so substantial. So it’s hard not to think of something I fell in love with that I listened to in the last 20-30 years. He’s just fantastic.

Fox News: You’ve had lasting success in television. How does it feel to embark on a new show?
Grammer: Well, you know, I’ve had some luck with a couple. I’ve had less luck with others. Writer’s strikes, networks have their own ideas -- that sort of thing has happened a few times. I just like working, you know? I like trying new stuff. That’s what keeps me going, really. I like to work. And I need to work. I’ve got a big family. But other than that, it’s what I do. So it feels great.

Fox News: Does it ever get tiring for you to still be recognized as Dr. Frasier Crane?
Grammer: No, no. Listen, I would be a fool if I took umbrage with that. He was a wonderful character. Frasier Crane is a wonderful character. He was fun to play, brought me great success, brought me great financial reward, and honestly, an enormous amount of satisfaction in having helped so many people.

The number of people that come up to me are never aggressive or unhappy. They’re always smiling and thankful and grateful for the work. And then of course, there are others who paid more attention to the show and had a little more understanding on some of the drama. So, it’s just a career. I’ve been at it for a long time. And it would be indecorous of me to take issue with the fact that I’m recognized for Frasier. It’s a great character.

Fox News: Do you stay in touch with your former cast mates?
Grammer: You know, I see them when I can. I see Jane [Leeves] and Peri [Gilpin] quite a bit. John and I haven’t been in touch lately, but you know, we try to connect as often as we can. And David [Hyde Pierce], of course, is in New York. If I get a chance, I’ll go see him in ‘Hello, Dolly!’ But we do stay in touch when we can.

Fox News: In this era of reboots, can we expect a ‘Frasier’ reunion in the future?
Grammer: No chance yet. But you never know!

Fox News: You’re also going to be making your London stage debut and then later join the Los Angeles Opera. What keeps you going as such a busy actor?
Grammer: ...I just love to try some new stuff. I mean, when people come and say, ‘Would you like to go be on stage, be in the LA opera and maybe just make a quick trip to the moon?’ I’m ready and available!

Fox News: With so many projects keeping you busy, how do you find that balance of being an on-the-go actor, all while being a hands-on father?
Grammer: The kids come first. That’s all. I mean, with the job I have to make sure I fulfil my obligations, but whenever I have any kind of break whatsoever, I’m with the kids. That’s just the way it is. They trump everything. I do have to work and they’re aware of that, but I try to keep them as involved as possible and with me wherever I go. That’s just the way it is. That’s my priority.

Fox News: You’re also launching your own brewery.
Grammer: Yes! That’s really been a passion for me over the last 25 years up here in upstate New York, in the Catskills. I’ve always wanted to see this land make a comeback and return to prosperity. I thought this was the best way to do it. I’m not a dairy farmer… I think I can manage a brewery. And that’s what we’re working on. We’re very excited about it and the beer is very wonderful. I’m very happy.

Fox News: When did you originally come up with the idea?
Grammer: Well, several years ago. I’ve been sort of circling this property for a long time and I just wanted to make it useful again. We decided on the brewery and [working with] people who are as equally passionate about it and it’s a very cool thing. We’re turning an old dairy farm into the brewery. We had a lot of hoops to go through… but it’s worth the fight. Faith American Ale will be out in the next two months. So we got that coming. And it’s really good so we’re rooting for it.