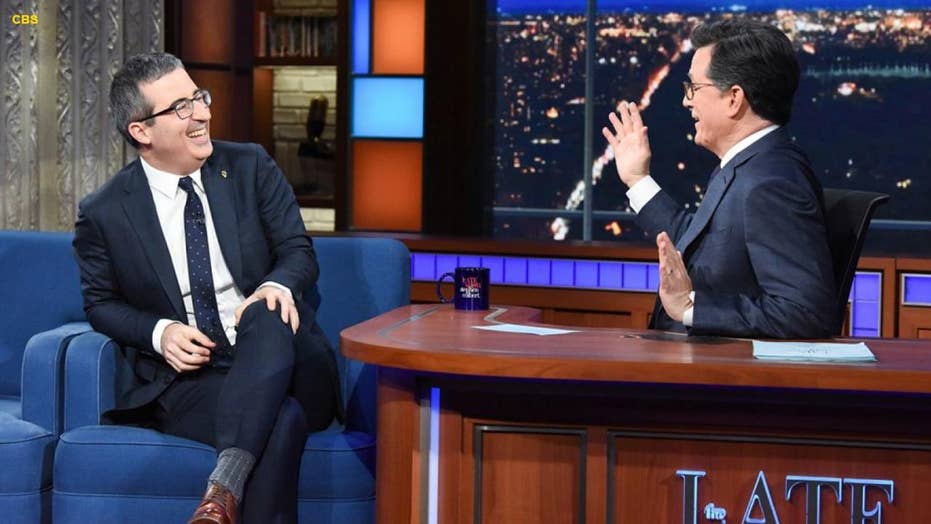 When Late Show host Stephen Colbert asked John Oliver what his thoughts were on a second term possibility for President Donald Trump, his answer received loud boos from the audience.

Stephen Colbert’s "Late Show" crowd didn’t like what they heard on Monday night.

During an interview with HBO’s John Oliver, the anti-Trump late night host asked his British counterpart and former Daily Show colleague if he’s “feeling good” going into what could be the final two years of Donald Trump’s presidency.

Oliver, whose HBO show “Last Week Tonight” returns this week, replied: “I definitely don't have that kind of optimism. To say we're halfway through his presidency I think is to ignore the concept of second term possibility.

“We are two to six years away from the end of his presidency.”

The comment didn’t go over well with the audience, who loudly booed the remark.

Oliver seemed momentarily taken aback, before saying the Constitution offers a clear endpoint to the Trump presidency – whether it comes in 2020 or 2024.

“We all have something to aim at… We all have a finish line like in a marathon that we can all try to stumble over, be covered in a silver cape and have someone say, you really shouldn’t have done that.”

Colbert wrapped up the Trump portion of the interview by asking if the most important thing is to “stay alive till January 21, 2025,” to which Oliver replied: “I think that’s what we all have to do, all of us especially Ruth Bader Ginsburg.”

That comment went over much better with the liberal-leaning audience, who cheered and clapped.

Oliver, 41, has previously said being able to joke about Trump on his show is a “gift.”

“It's the gift that keeps on giving like a fire hose keeps on giving — you wish it would stop,” the British comedian told reporters at the 2018 Television Critics Associations’ Summer Press Tour.

Colbert is also no stranger to mocking the president, and recently accused Trump of “folding like an origami swan” in border wall funding negotiations.

In a monologue last month, Colbert cited a Wall Street Journal report that quoted the president saying he doubts that he’d accept anything short of the $5.7 billion for the wall in about three weeks.

"So, just to be clear," Colbert said during his monologue. "He’s making the exact same offer, backed by the exact same threat, but somehow he expects different results. Well, you know what they say, the definition of insanity is Donald Trump."