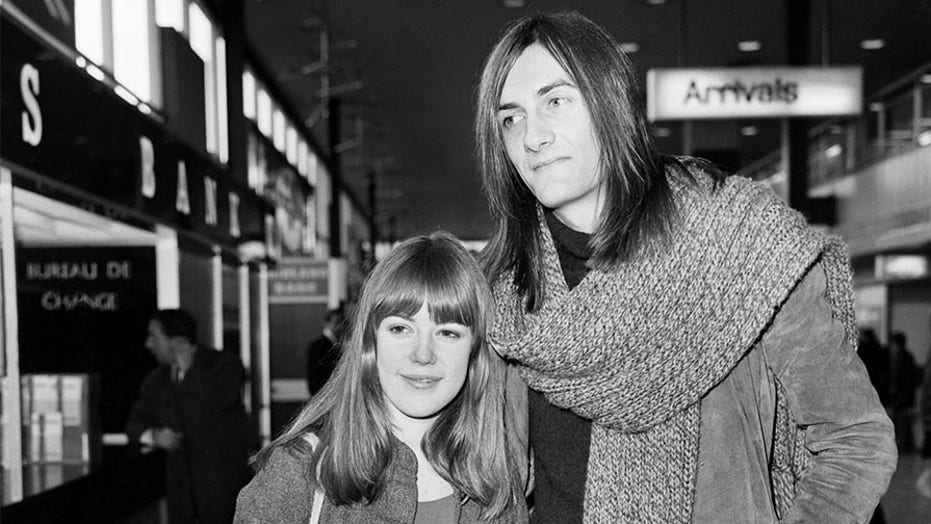 The former model married Mick Fleetwood twice -- first in 1970 before the couple called it quits in 1974. They then reunited in 1977. The pair, who share two daughters, remained together until 1978.

In between, the now-72-year-old got to witness Fleetwood Mac's legendary 1977 album “Rumors” being created. But as the band was flourishing musically, Boyd was privately suffering from loneliness.

According to The Guardian, she became involved with a guitarist in the band, Bob Weston, who gave her the attention she was yearning for from her husband. As for Fleetwood, 73, he would have his own affairs, including one with the band’s songstress, Stevie Nicks. While Fleetwood Mac jetted off on tour, Boyd found herself alone raising a family.

After all the ups and downs Boyd has endured, she has since dedicated her life to running an addiction treatment center in England, The Guardian reported. Boyd recently released a memoir titled “Jennifer Juniper: A Journey Beyond the Muse,” where she reflected on her life and the countless twists and turns it took over the years.

Boyd spoke to Fox News about her relationship with Fleetwood, why she has forgiven Nicks, now 72, how she inspired Donovan’s “Jennifer Juniper” and the one Beatle that surprised her the most.

Fox News: You met Mick Fleetwood at age 15. What made him different?
Jenny Boyd: I would say I was 16. I didn’t go out with him until about a year later because I felt my best friend had a big crush on him. But when we started to go out, there was something about him that felt in some ways familiar, right from the beginning.

We were both unbearably shy and horribly shy with each other. But we could both sense this energy between us. I remember when he first held my hand. You just felt that energy, that coolness. And of course, we came from similar backgrounds. There was definitely a sense that we understood each other right from the start.

Fox News: You got to witness music history when Fleetwood Mac’s "Rumors" was being created. At any point, did you ever think the album was going to completely change music?
Boyd: No, I didn’t. I didn’t think far ahead. But you certainly felt that magic during rehearsal, like something was happening. Their harmonies reminded me when The Beatles first came on the scene. Their harmonies seemed to be the thing that was so catchy and attractive. You could just tell that something special was going on.

Fox News: For Mick Fleetwood, the band came first. How did you cope with that as a wife and mother? There must have been a sense of loneliness for you while trying to keep the home life together.
Boyd: Absolutely. There was a lot of loneliness. I would hang out with them in the studio and have a drink with them. But there was loneliness because I felt like I was bringing our children up alone. [Mick] spent his time in the studio. They weren’t coming home at night because they were recording and it had gone on further than expected.

And they were under a lot of pressure. The music was either his wife or his mistress. I’m not sure which one it was. But in some ways, I understood it. It was an exciting time for them and the music was wonderful. But for me, deep down, being the mother of two small children, it was a lonely place. I didn’t know anybody else from our little crowd who had children.

Fox News: You have said nothing but wonderful things about Stevie Nicks. How did you get to that point?
Boyd: Well you know, that went on all those years ago. I remember a few years ago, I was in Paris. I was standing on the side of the stage and just watching [the band perform]. I just thought, “Gosh, we had been through such an extraordinary time together over the years. And we all somehow survived it.”

I think it’s more a feeling of, I understood. She was obviously very pretty. And if you’re creating with somebody and constantly on the road, constantly singing together and just experiencing this euphoria up on the stage -- there was bound to be an attraction.

Yes, it was devastating. But after all these years, it’s all water under the bridge. Mick and I are great friends. We are parents and grandparents. We have a love. And I think we all kind of have a love for each other because we’ve all experienced such extraordinary times together.

She did apologize years later. I remember she looked at me and said, “I’m really sorry. I don’t know why I haven’t said it before. But it was one of those things that happened. I said, “I forgave you years ago, but I appreciate you saying this.” There were no bad vibes or anything. And crazy things happen all the time, like Mick and I getting divorced and then seeing each other. It got to the point where we would say, “Oh that’s right, we’re divorced.” *Laughs*. And then we remarried. The whole thing was just surreal.

Fox News: Not many people can say they’ve married their significant other twice. Do you have any regrets?
Boyd: Do I regret marrying him twice? No. I still wanted it to work. I really, really wanted us to be together. Always. I never wanted to get divorced. I wanted to be together for our children. And it was so hard, you know. It was like hitting my head against the wall, but I’d come back for me.

And I kept hoping, obviously in a very naive way, that it’ll be better. It will work this time. I kept hoping that it would work until finally, I realized that was it. And I think we were bad for each other in that way because I believe he really wanted it to work, too. There was this thing where we just couldn’t let go of each other, but it was so difficult to live together.

Fox News: How did you end up becoming the inspiration for the 1968 song “Jennifer Juniper”?
Boyd: I was working at this boutique and Donovan walked in -- I had met him before. We just started talking and we ended up seeing each other a couple of times. I remember the second time we went out, he told me, “I wrote a song for you.” We sat down, he took out his guitar and then he started singing “Jennifer Juniper.”

It was the most extraordinary thing because I was really shy in those days. I didn’t even know where to look. But it was absolutely wonderful. It’s been one of those things that have stayed with me these 50 or so years. Every time I hear it, it takes me straight back to that moment. It was the ‘60s. We were so innocent and there was this idealism that we could change the world. It’s a very precious song to me.

Fox News: It’s been said that while you and Donovan didn’t have a romantic relationship, he certainly had a crush on you. Is this true?
Boyd: *Laughs* Yes, that’s true. We kissed, but it didn’t go any further than that. He really liked me and I really liked him. But we became really lovely friends. He wasn’t a proper boyfriend.

Fox News: Like many others in the ‘60s, you went to India and studied transcendental meditation. How did that impact your modeling career?
Boyd: I had an a-ha moment. I didn’t want to model anymore. I just thought I wasn’t being true to myself. I was looking for meaning in my life and I felt this deep connection that modeling just wasn’t providing. There was no question.

Fox News: The Beatles were also part of this journey to India that you embarked on. What was your impression of them?
Boyd: Well, I’ve known George [Harrison] for a number of years because he was with my sister Pattie [Boyd] and they married. So it felt natural to be with them. Both he and my sister were on that same journey of looking for something meaningful as I was. John [Lennon] was all for it and it seemed like Paul [McCartney] went along with it. And I believe Ringo [Starr] was only there for a short while.

I remember we had our own bungalow. During the day, we would go up on the roof and just play for each other. I felt like I was part of this little audience. We were all there to meditate, but to also have peace and tranquility. For them, they experienced a lot of creativity.

Fox News: Which Beatle surprised you the most and why?
Boyd: I think John surprised me the most. He wasn’t intimidating, but when they were together, they shared this unmistakable bond. You almost felt like an outsider. So I would just stay quiet and listen. But when you got to really know him, you immediately discovered his quick wit. I also found him to be so, so gentle and sensitive. I got to see that side of him. And that certainly surprised me.

Fox News: What’s life like for you today?
Boyd: I feel very grateful. I have a lovely family. I’m surrounded by love, friendships and creativity. Life feels very good… I’ve come out on the other side and I’m thankful for the life I was given.

Beatles John Lennon (1940 - 1980) and George Harrison (1943 - 2001) leave Heathrow Airport for two months' transcendental meditation at Rishikesh in the Himalayas with the Maharishi Mahesh Yogi, 15th February 1968. Accompanying them are their wives Cynthia and Patti, and Patti's younger sister Jenny. The other two Beatles are due to join them later (Photo by Keystone/Hulton Archive/Getty Images)

Fox News: What’s one key piece of advice you would give to your younger self?
Boyd: The same advice George gave me years ago -- just be yourself. I realized many years later that’s what we have to do. Just be ourselves. We don’t need to be comparing.

Fox News: What compelled you to write “Jennifer Juniper” now?
Boyd: I’ve actually been working on this book for a number of years. I think I started 18 years ago when I first came over to England after living in LA for so many years, just trying to make sense of everything that has happened to me. I feel as though I am getting into the second part of my life. So I started writing. There were painful bits, but I kept writing, revisiting those memories. It just felt right.