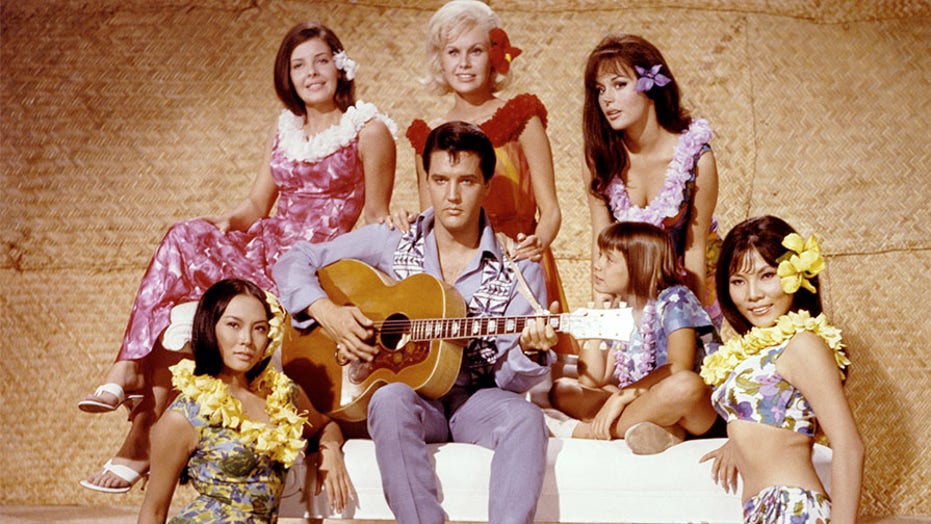 Irene Tsu has worked with some of the most recognizable names in Hollywood -- but none compare to the King.

The actress recently published a memoir titled “A Water Color Dream: The Many Lives of Irene Tsu,” which chronicles her rise in Hollywood while helping to break barriers for Asian-Americans. In the book, she recalled working alongside several stars, including John Wayne, Doris Day and Jimmy Stewart, just to name a few.

The now-75-year-old shared the screen with Elvis Presley in 1966’s “Paradise, Hawaiian Style,” an experience she will never forget.

“It was the very first day on set and I was so nervous,” Tsu told Fox News. “Everyone was having lunch and I really didn’t feel like eating because I was that nervous. So I decided to go take a nap and if I was needed on set, they would call me. I went to my trailer and the air conditioner wasn’t working. I was just hysterical -- really hysterical. I thought, ‘Oh no, this isn’t happening.’ You could only imagine how hot it was. And there was no one around because everyone was having lunch.”

“I started walking around and I suddenly found this big hut,” Tsu continued. “I thought, ‘There must be an air conditioner there.’ All of a sudden, there was a hand stopping me. I immediately apologize without even looking up. And I was told, ‘That’s Elvis’ dressing room. You can’t just go in. I’m going to have to ask if you’re allowed.’”

At that moment, Tsu didn’t see Presley, but she was given the green light to hang out in his room. Upon entering, she immediately felt the relief of a running air conditioner and collapsed on a nearby couch.

Tsu said the man who initially stopped her suddenly rushed in.

“Elvis had told him I could stay for as long as I liked and not to worry about it,” Tsu said. “So I fell asleep.”

‘FULL METAL JACKET’ STAR MATTHEW MODINE EXPLAINS WHY HE TURNED DOWN ‘TOP GUN,’ ‘BACK TO THE FUTURE'

Tsu claimed that when she opened her eyes after a restful sleep, she saw Presley’s face closely staring right back at her.

“He was putting a cold compress on my face,” Tsui recalled. "He thought I must have passed out or something."

The starlet admitted she was stunned.

“He was absolutely beautiful,” she said. “I mean, people with great voices are attractive to me, but this was something else. I didn’t even know what to say because I was so shocked. And then he went, ‘Don’t worry about it. I just want you to feel good. Are you hungry? Do you want something to eat? Are you thirsty?’ I couldn’t even talk!”

“I was overwhelmed by everything I was experiencing,” she continued. “He smelled like baby powder and milk. But he just kept insisting if I needed or wanted anything.”

After Presley left, Tsu eventually got up and stepped, outside where she saw Presley surrounded by his entourage.

The young Chinese-American actress Irene Tsu in Hollywood, circa 1967. (Photo by Vittoriano Rastelli/Corbis via Getty Images)

“The Colonel [Presley’s manager] was there and he just gave me bad vibes immediately,” she said. “He was not a kind man.”

Tsu claimed she and Presley quickly became friends on set. At the time, the singer was fascinated by martial arts and he learned that Tsu knew Bruce Lee. But there was another reason they bonded easily.

“He was a Southern Baptist and my family was very Christian,” Tsu said. “So we connected from that alone. He was very spiritual.”

Tsu stressed that they were never lovers. And while they became pals, their friendship would ultimately be brief.

“I remember the last time we spoke, we were hanging out in his trailer,” she said. “He just looked at me and said, ‘Keep that light burning baby.’ And that was it. I guess he lost his light. Couldn’t find his way home, you know? I truly feel he just worked himself to death. It was very tragic.”

Irene Tsu in Hollywood, circa 1967. (Photo by Vittoriano Rastelli/Corbis via Getty Images)

Presley passed away in 1977 at age 42. Doctors said he died from a heart attack that was likely brought on by his addiction to prescription barbiturates.

Tsu has kept busy over the years appearing in film and television, as well as pursuing art and design. Tsu said she still remembers her time with Presley fondly.

“He was filled with so much light,” she said. “He was very generous and caring. He was always surrounded by people wherever he went. But if you just sat down with him, he was simply a good friend.”