Hillary Clinton's surprise Trump-bashing cameo during the 60th Annual Grammy Awards on Sunday night caused at least a couple of viewers to switch channels, namely the president's U.N. ambassador, and Trump's oldest son. But the producer of the Grammys said the telecast stands by the controversial cameo.

Grammys host James Corden set up a pre-taped bit about who might take home next year's spoken word award.

"We know that our current president does love winning awards and the good news is he may just be the subject of next year's winner [for Best Spoken Word Album]," Corden announced. "The question I've got is, who'll be the narrator?"

Outspoken anti-Trump stars John Legend and Cher then auditioned to be the narrator for Michael Wolff's book "Fire and Fury" about Trump's White House. 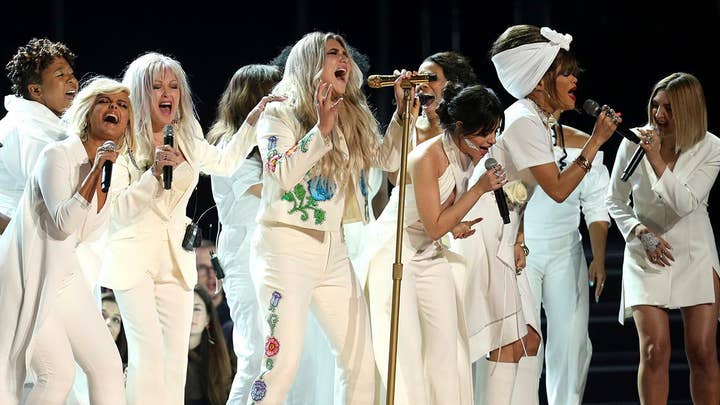 Snoop Dogg, DJ Khaled and Cardi B also read excerpts from the book during the fake auditions.

Finally, Clinton read from the book and Corden declared, "That's it! We've got it!"

Clinton said, "You think so? The Grammy's in the bag?"

Corden replied, "In the bag!"

The segment resulted in wild applause from the star-studded crowd. But not all were pleased. United States Ambassador to the United Nations Nikki Haley slammed the bit. However, the harshest words came from Donald Trump Jr.

After the show, Grammys Executive Producer Ken Ehrlich said getting Clinton to appear in the skit wasn't tough. However, he credited Corden with sealing the deal.

"She kind of took a couple of days to say 'yes,' but ultimately she saw the script, she knew what we were doing and she liked it."

Clinton recorded the segment near her home on Friday, the Grammys producer added.

Ehrlich said he was aware the bit was getting some backlash, but he told reporters backstage, "We stand by what we did."