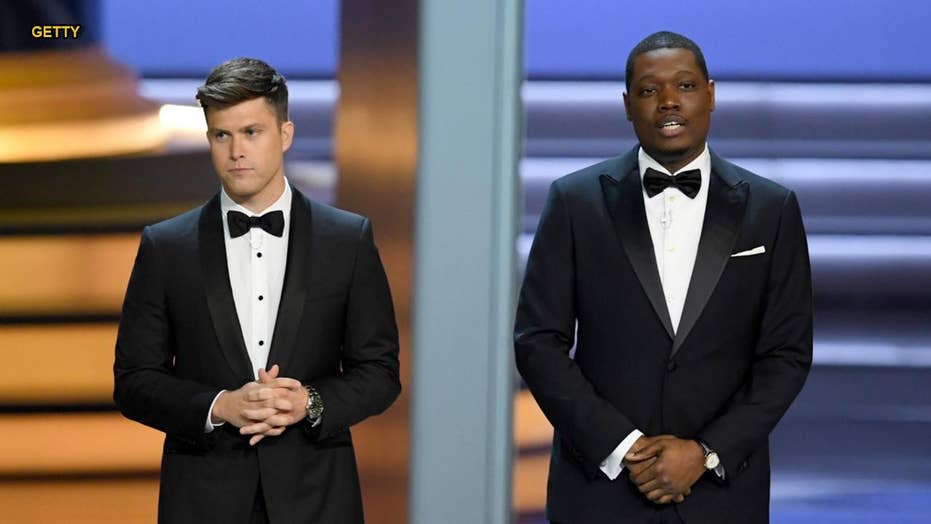 Emmys host Michael Che says the only white people who thank Jesus at award shows are Republicans, 'ex-crackheads.' The joke didn't sit well with some viewers.

Hollywood may have laughed when Emmys host Michael Che said the only white people who thank Jesus are "Republicans and ex-crackheads," but Tinseltown's latest middle finger to Middle America fell flat in flyover country, and may have contributed to the telecast's all-time low viewership.

Co-host Michael Che left many viewers of the 70th Annual Emmy Awards upset during the opening monologue with his fellow "Saturday Night Live" star Colin Jost, explaining that his mother would not be watching the show on Monday night.

"She says she doesn’t like watching white award shows because you guys don’t thank Jesus enough," Che said. "That’s true. The only white people that thank Jesus are Republicans and ex-crackheads."

The joke didn't sit well with some viewers, who took to Twitter to complain. Not only that, the show’s ratings dropped 10 percent from last year's already-dismal numbers, setting an all-time low, according to TheWrap.

While many viewers may have changed the channel after the opening monologue, jabs at average Americans were far from over and the Jesus gag became a running theme throughout the evening.

Conservative strategist Chris Barron told Fox News that “large swaths of the American public just want to be entertained” but instead were turned into "unwilling participants" in a political rally disguised as an awards show.

“Whether it’s the NFL or the Emmys, people desperately want a break from politics."

“Whether it’s the NFL or the Emmys, people desperately want a break from politics. It’s amazing to me at just how tone deaf Hollywood is,” Barron said.

“Most Republicans have stopped watching awards shows or know that even if they can stomach it, the White House and their core values will be attacked. I kept thinking last night, thank goodness for a few actors like Chris Pratt, who buck the trend and show a healthy respect and love for Christianity in acceptance speeches,” Fox Nation host Britt McHenry said. “Reverence for God is something to cherish and uphold, not ridicule.”

“Most Republicans have stopped watching awards shows or know that even if they can stomach it, the White House and their core values will be attacked."

Jokes about religious Republicans weren’t the only jabs at Middle America.

Prior to the official event, actress Regina King spoke with E! about a cryptic Instagram post in which she asked to “stop making stupid people famous,” which many have interpreted as a dig at President Trump. The Red Carpet also featured actress Jennifer Lewis wearing a Nike sweatshirt “to applaud them for supporting Colin Kaepernick,” who has polarized the nation by starting the trend of kneeling during the national anthem prior to NFL games.

Jost discussed a handful of shows that were canceled and picked up by other networks before joking that Roseanne Barr’s show was “picked up by white nationalists.” He also implied that some Americans don’t think Nazis are bad and fantasized about President Obama upsetting Trump with a dig at the former reality TV star who is famously obsessed with ratings.

"The Obamas now even have their own production deal at Netflix," Jost said. “My dream is that the only thing they produce is their own version of 'The Apprentice.' And it gets way higher ratings."

Meanwhile, the Emmys decided to honor late Senator John McCain during its in memoriam. Nobody would complain about an American hero being remembered in front of a national audience, but Media Research Center contributing writer Karen Townsend questioned the motive behind the decision.

“One can't help but wonder if this was done as a subtle dig at President Trump. After all, it was only 10 years ago that all of Hollywood hated McCain when he ran for president against their beloved Obama,” she wrote.

While the Emmys weren’t as political as other Hollywood events have been during the Trump era – there were enough anti-conservative moments to turn off many average Americans. NewsBusters managing editor Curtis Houck told Fox News that “award shows have been, for some time, an opportunity for Hollywood to gather in one room to congratulate themselves” but instead of simply celebrating their successes, the shows have become a chance to condemn those who live and think differently.

“They cater to one audience: liberals who despise the current presidency,” he said. “This year's Emmys in particular was actually one of the least Trump-centric award shows since he took office, but the appeal to reach a wider audience is no longer there. The politics are baked into the DNA. And now, Middle America knows to simply change the channel.”