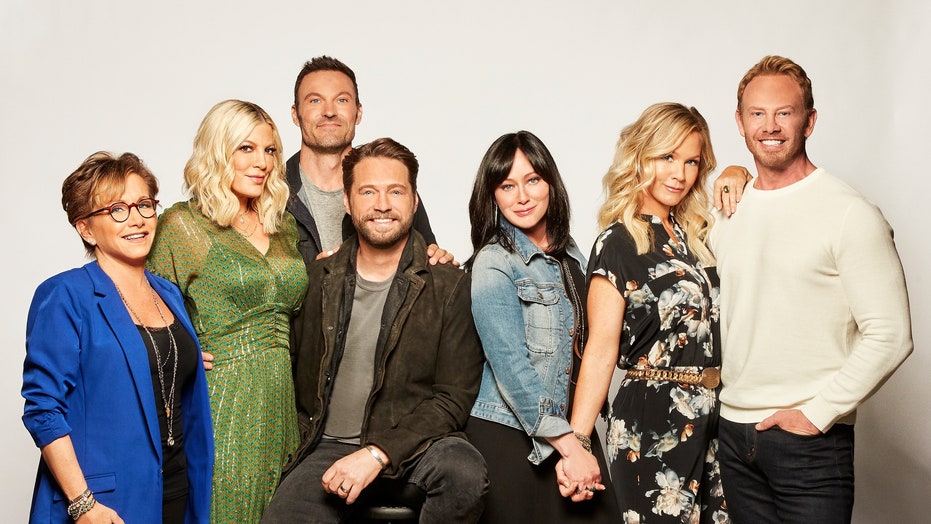 The 'Beverly Hills 90210' reboot 'BH90210' features original cast members playing themselves in real-life... with a twist.

Nearly two decades after the original "Beverly Hills, 90210" left television, a reboot is coming back with some of the original cast members in tow.

The upcoming Fox series -- titled "BH90210" -- which premieres on August 7, will center around several of the show's original characters, but this time, it will be a six-episode revival "inspired by the six original stars’ real lives and relationships."

In anticipation of these iconic characters gracing our screens once again, we've documented how far many of the show's stars have come since the original program wrapped up all the way back in 2000.

The Canadian actor played the righteous Brandon Walsh during the majority of the show's run, before departing at the beginning of the program's ninth season.

Since his breakout role, Priestley has starred in the Canadian series "Call Me Fitz" as a corrupt car salesman, and a private investigator in "Private Eyes" for Global TV.

Off-screen, he tied the knot to Naomi Lowde-Priestley in 2005, and the couple raised two children together: a son, Dashiell, and a daughter, Ava.

Doherty may have gotten her start on "Our House," and had a prominent role as Heather Duke in the cult film "Heathers," but her time as the reckless Brenda Walsh on "90210" was perhaps her most well-known gig.

After leaving the show following the series' fourth season, Doherty went on to take on numerous roles, including the powerful witch Prue Halliwell on "Charmed," and Rene in Kevin Smith's "Mallrats."

In 2015, the actress revealed she had been diagnosed with breast cancer. Two years later, she announced she was in remission.

Doherty tied the knot with Kurt Iswarienko in 2011.

Green is best known for playing the musically-inclined David Silver on "90210," and over the years, it seemed the actor's time in the role rubbed off on his life away from the cameras.

The star became increasingly infatuated with DJing and rapping, leading him to release one solo album, "One Stop Carnival."

Green also focused on acting after his departure from "90210," and landed a prominent role in the TV series "Terminator: The Sarah Connor Chronicles." Additionally, he made a cameo during the sitcom "Anger Management," and was promoted to a series regular, before the show ended in 2014.

The actor is married to fellow star Megan Fox. The couple shares three sons together. Green also has a son with ex and former "90210" co-star, Vanessa Marcil.

Like many of her co-stars, Spelling's breakout role came on "90210," as she portrayed Donna Martin on the teen soap, which lists her late father, Aaron Spelling, as a producer.

From her beginnings as a supporting character during the show's early days, Spelling's character of Donna later achieved a more prominent role as the series went on, later returning for the "90210" spinoff series for CBS.

Since her time on the program, she's had steady work on tons of made-for-TV films and independent features.

Spelling also published an autobiography, "Stori Telling," in 2009, and briefly played a fictionalized version of herself on the sitcom "So Notorious," which ran for ten episodes in 2006.

The actress is married to Dean McDermott. They have five kids together.

Carteris' biggest role was as the academically-focused Andrea Zuckerman on "90210," who was a main character for the first five seasons of the show, before making occasional guest appearances throughout the program's final seasons.

After her time on the soap, Carteris became prolific on television, often being seen smaller roles on tons of popular shows, including minor appearances in "NYPD Blue," "Criminal Minds," "NCIS," "Drake & Josh," and many more.

Since then, she's excelled in the executive department of entertainment, as she currently sits as the president of the SAG-AFTRA trade union.

In 1992, Carteris married stockbroker Charles Isaacs. They have two daughters, Kelsey and Molly, together.

During the original run of "90210," Ziering starred as the wealthy Steve Sanders, whose wild and rich lifestyle would often land him in trouble. However, the character maintained a more sensitive side throughout the series.

Nowadays, Ziering still spends time in front of the camera, having appeared in several films in the "Sharknado" franchise.

The actor also appears as a voice actor in several animated features, including the brief 2003 "Spider-Man" animated series, and the "Godzilla" animated show, which ran from 1998 to 2001.

Ziering is married to Erin Ludwig who he shares two daughters with.

Garth became popular as the iconic Kelly Taylor on "90210," who was arguably the show's most central and vital character throughout the original program's run, and was a character which TV Guide said, "tapped into the very essence of teenage angst."

Since leaving her celebrated role after the series' conclusion, Garth made a return to the universe of the show by appearing in the "90210" spinoff for CBS, and later found success as leading woman Valerie Tyler in the sitcom "What I Like About You."

In recent years, Garth has starred in her own reality series, "Jennie Garth: A Little Bit Country," which lasted for one season on CMT. She also appeared as a guest judge on the ninth season of "RuPaul's Drag Race."