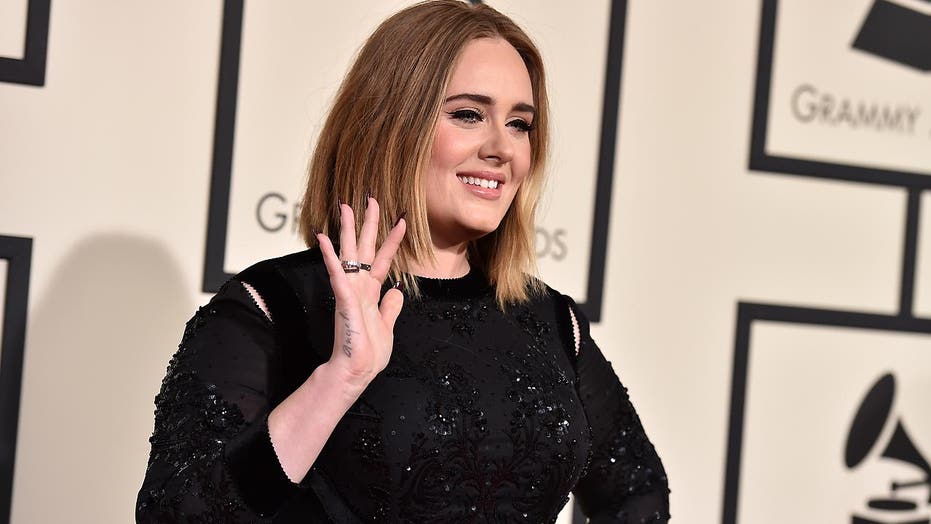 Hollywood Nation: Adele is back on top

A tearful Adele was crowned queen of the British music scene — and banished memories of Grammy Awards sound glitches — with four prizes and a soulful performance at the Brit Awards on Wednesday.

"Not bad for a girl from Tottenham that don't like flying," said the North London-born singer as she accepted the Global Success Award.

Adele also sent a message of public support to "Tik Tok" singer Kesha, who is fighting to get out of a contract with record producer Dr. Luke, who she says sexually assaulted her.

“I would also like to take this moment to publicly support Kesha," she said.

Adele took trophies for British female solo artist of the year; British single of the year, for lovelorn ballad "Hello"; and album of the year for 15 million copy-selling "25."

Adele has seen "25" — her first album in almost five years — top charts around the world, though her performance at last week's Grammy Awards was unsettled when a microphone fell into a piano during the tender song "All I Ask."

There were no such glitches Wednesday during her performance of "When We Were Young," though the singer choked up as she accepted the Global Success award — presented by astronaut Tim Peake from the International Space Station.

"You're getting ... bored of me," she quipped, accidentally slipping an expletive into the live telecast.

Later she apologized for losing her composure.

"I'm really sorry for the ugly crying face," she said.

The Brits ceremony, performed to music-industry figures and thousands of fans at London's O2 Arena, also featured performances from Coldplay, Justin Bieber and Rihanna — joined onstage by Drake for a sultry "Work."

The prize for best British group went to dependable crowd-pleasers Coldplay. Singer Chris Martin dedicated the award "to all the young men and women musicians in refugee camps around the world. We could be them and they could be us."

The awards — which celebrate international as well as British acts — have been accused of failing to represent the industry's ethnic diversity, in an echo of the debate raging around the Academy Awards. All the British nominees this year were white.

Singer Jack Garratt, who won the critics' choice prize, said "it is a shame that half of U.K. music has been somehow forgotten about."

Awards organizer the British Phonographic Industry has promised to look at how nominees and winners are selected, and has announced a new advisory committee made up of black and ethnic minority music-industry figures.

U.S. band Eagles Of Death Metal, whose concert was targeted in the November Paris attacks, lost out to Australia's Tame Impala in the international group category.

Before the show, Eagles singer Jesse Hughes thanked everyone who had supported the band, which returned to the Paris stage last week, three months after Islamic extremists massacred 89 people during the band's show at the Bataclan theater.

"The reception we've received since coming back to Europe has truly been humbling and has helped us get back to doing what we do — playing kick-ass butt-shaking rock 'n' roll music," he said.

The Brits were once renowned for chaos, enlivened by incidents including a 1992 stunt in which British band the KLF left a dead sheep at the after-show dinner.

The ceremony has been transformed in recent years into a slick, often predictable, talent showcase — though Madonna gave audiences a shock last year when she got tangled in her flowing cape and tumbled off the stage mid-performance.

This year's show was short on surprises — apart from Bjork beating bigger-selling artists to female international artist of the year — but strong on spectacle, with an opening number featuring dozens of dancers in red helmets and skirts that suggested flamenco centurions.

Jets of flame erupted liberally during Bieber's performance of "Sorry."

"I thought you were going to set us all on fire, Justin," said Adele.

"It's almost impossible to mention Bowie's name in the past tense," Lennox said.

"The legend of his extraordinary sound shall be revered for as long as the Earth shall spin."