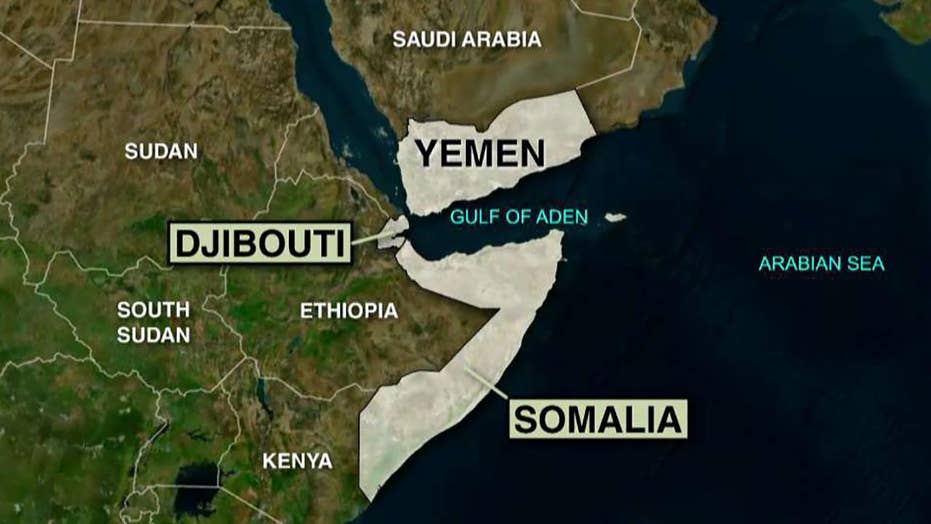 All U.S. military flights have been grounded in Djibouti after two separate aircraft mishaps this week in the African nation, military officials announced Thursday.

The pilot in that incident ejected shortly after take-off and is listed in "stable" condition, military officials told Fox News.

Hours after that incident, a Marines Corps helicopter suffered "structural damage" during a "hard landing" around 6:40 p.m. at an approved exercise landing zone at Arta Beach, Djibouti.

A U.S. Air Force Thunderbirds pilot has died in an F-16 crash outside Las Vegas, marking the third military crash in the last two days. Jennifer Griffin has updates live from the Pentagon.

"The aircrew were not injured during the landing and the helicopter has remained at the landing site pending additional assessment," officials said.

Both aircraft were participating in Alligator Dagger, a scheduled training event involving U.S. personnel in the region. That training event has also been canceled.

The Pentagon rejected calling the string of recent military crashes a "wave" or "crisis" during a briefing on Thursday, saying that they are going to "look at each one.

"We regret each one, we will look at them carefully. I am certainly not prepared to say that it’s a wave of mishaps or some form of crisis," Lt. Gen. Kenneth McKenzie said.

When asked a follow-up question by Fox News on explaining the recent mishaps, McKenzie said that mishaps in military aviation happen anytime people are flying "complicated machines" in situations that have "less than total visibility and doing things that are difficult to do."

Lucas Tomlinson has the latest details about the crash.

"Mishaps are inevitably going to occur," McKenzie said. "We don’t want any mishaps to occur. One mishap is too many. But I’m not prepared to say right now that this is some kind of crisis."

There are roughly 4,000 U.S. troops deployed to the East African nation, which serves as a base for U.S. operations against terror targets in Somalia and Yemen. The news of the grounding was first reported by NBC News.

"Routine operations for other units assigned to U.S. Naval Forces Central Command are unaffected by this cancellation, and U.S. Naval personnel continue to conduct maritime security operations throughout the region," the Navy said.