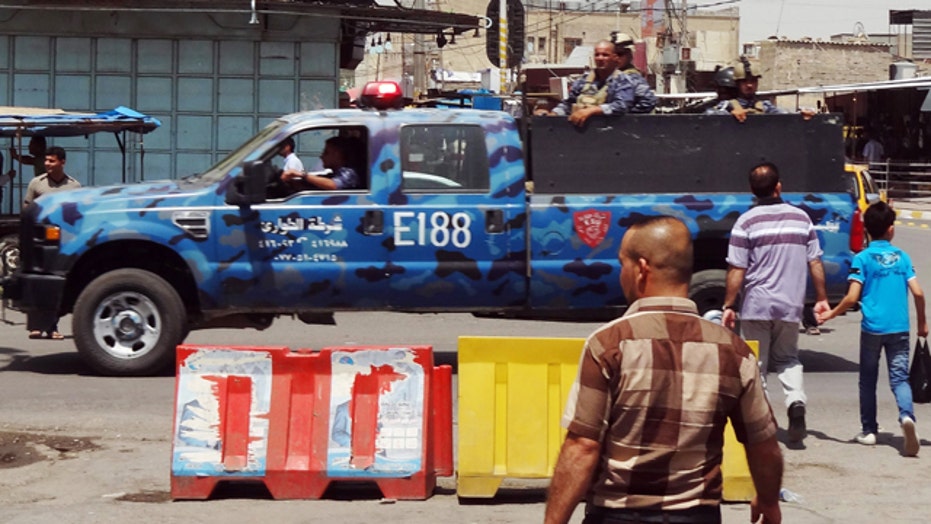 US military not coming to Iraq's rescue?

Former CIA official Philip Mudd: 'There's not much we can do here... Maliki has made his bed'

The man who once led U.S. forces in Iraq and the mother of the first Navy SEAL to die in the war both fear the government the US put in place may not be able to withstand the jihadist insurgency bearing down on Baghdad.

While Al Qaeda-inspired militants take control of key Iraqi cities in a fast-moving insurgency, threatening violence to all who oppose their vision of an Islamic state, retired Lt. Gen. Ricardo Sanchez called the deteriorating situation "depressing" and "unfortunate" -- but not surprising.

"Because of the lack of focus on reconciliation and ensuring that a quality military was built with the capability to defend the nation, it’s not unexpected," said Sanchez, who served as the top commander of U.S. troops in Iraq from June 2003 to July 2004.

"We had an obvious responsibility to build up the governing system that we left behind," he said. "The challenges of building a capable security force of any type is not something that can be accomplished in a matter of two or three years."

"I think what we’re seeing today is a direct result of our efforts," said Sanchez, who declined to comment on whether he thought the U.S.-led invasion of Iraq in March 2003 was a prudent decision.

During Sanchez's command, Saddam Hussein was captured and the sovereignty of the country handed over to the Iraqi government. His tenure also saw the rise of an insurgency composed of a diverse mix of enemy fighters.

Debbie Lee, whose 28-year-old son Marc was the first U.S. Navy Seal to die in Operation Iraqi Freedom, was more pointed in her criticism on the current state of Iraq, blasting President Obama for his decision to withdraw troops completely in December 2011.

"What a waste of what we did," Lee said Thursday. "The arrogance of our commander-in-chief and the decision he made, having no experience in the military, set the stage for this to happen."

Lee, who traveled to Iraq in 2007 and again in 2010, said she saw "first-hand the difference our troops made."

"It's heartwrenching for me," said Lee, who was sitting with her Bible study group, celebrating her birthday, when she received the call her youngest son had died.

Marc Alan Lee, who was posthumously awarded the Purple Heart, Bronze Star with Valor and the Silver Star, died Aug. 2, 2006, in a fierce gun battle while on patrol against insurgents in Ramadi.

U.S. commanders on the ground told Debbie Lee that Marc was killed while single-handedly holding off insurgents as his SEAL team rescued a wounded soldier. U.S. officials informed Lee that her son fired 100 rounds of ammunition against enemy fighters before he was killed in what was described as a two-hour battle.

"He willingly gave his life so that his [comrade] could live. Marc was a selfless young man who placed more value on the lives of others,” said Lee, who founded America’s Mighty Warriors, a group dedicated to providing programs to improve the quality of life and recovery for injured soldiers and families of the fallen.

Sanchez's successor, meanwhile, defended the American effort to train Iraqi security forces despite the current Sunni insurgency that has escalated at an alarming rate.

Mark Hertling, a retired general who led American forces in the volatile region in 2007-2008 as they fought to end sectarian warfare that pushed the country to the brink of civil war, said neglect by the Shiite-led government left Iraq in a dangerous position and "squandered" the opportunity for real progress.

"There is a continued use of the military as an element of power, as opposed to a security mechanism," he told The Associated Press Thursday. "There has been more of a focus on consolidating power by the current administration, versus taking care of people and ensuring their security."