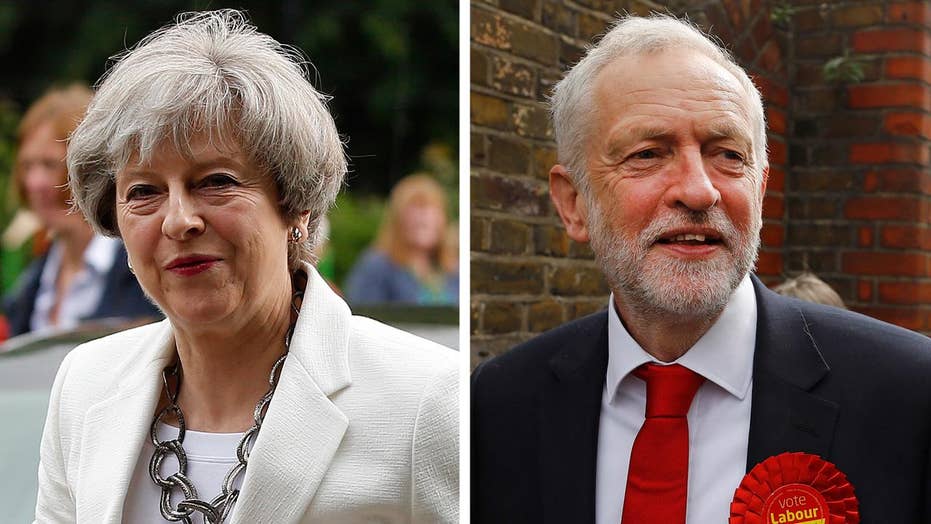 Theresa May fighting a close battle in UK election

The exit poll, commissioned by the U.K.’s three main broadcasters and released after the polls closed at 10 p.m., projected the Tories to hold 314 seats, down 16 from their total at the end of the last Parliament. The Labour Party was forecast to gain 37 seats for a total of 266, the Scottish National Party was projected to lose 20 seats for a total of 34, and the center-left Liberal Democrats were projected to have 14 seats, up five from the last Parliament.

"It's still very, very early in the evening," said Northern Ireland Secretary James Brokenshire. "It's too early in the night to be drawing conclusions."

The forecasted result caused the British pound to plummet more than 2 cents against the dollar, falling from $1.2955 to $1.2752 late Thursday. Some investors worry that the lack of a clear Conservative majority would weaken the next government's hand in the upcoming negotiations to leave the European Union.

Officially, a party needs to win 326 seats to gain a majority in the 650-member House of Commons. However, the actual magic number is closer to 323. The Speaker does not vote and members from Sinn Fein, the Irish nationalist party which won four seats in the last general election in 2015, do not appear at Westminster.

Though the Conservatives would remain the largest single party, the projected result puts Labour leader Jeremy Corbyn -- long thought unelectable even by members of his own party -- tantalizingly close to the threshold of Number 10 Downing Street.

However, the Liberal Democrats have repeatedly ruled out forming a governing coalition with either the Conservatives or Labour, citing policy differences over the U.K. leaving the European Union.

For May, the projected result could lead to the end of her tenure as Prime Minister and Conservative Party leader and spark a bitter round of finger-pointing over how an election many thought unlosable was lost.

Craig Oliver, a spokesman for former Prime Minister David Cameron, told Sky News that if the exit poll was accurate, there will be "there will be deep and lasting shock" in party headquarters that May's gamble to call an early election had backfired.

"It was the biggest gamble a politician has taken for a long time," Oliver said, "and if that exit poll is right, it's failed."

In late April, the Conservatives had led Labour by 21 points in an average of the major national polls, and May was considered the greatly preferred choice for prime minister over Corbyn, a 68-year-old socialist who has opposed British military interventions in Iraq, Afghanistan and Libya and has fought tougher anti-terrorism laws for decades. A stalwart of Labour’s far-left, Corbyn also shared platforms with Irish republicans in the years when the IRA was setting off bombs in Britain.

The 60-year-old May, who took over as premier after Cameron’s resignation following the outcome of last June’s ‘Brexit’ referendum, had called the election three years ahead of schedule. She had envisioned the vote as a referendum on her government’s ability to negotiate Britain’s departure from the European Union.

But Brexit failed to emerge as a major issue in the campaign, as both the Conservatives and Labour said they would respect voters' wishes and go through with the divorce.

In the wake of the May 22 suicide bombing at an Ariana Grande concert in Manchester and the June 3 van attack on London Bridge in the heart of the capital, Corbyn slammed May for overseeing massive cuts to police forces as part of larger spending reductions under the Cameron premiership.

“You cannot protect the public on the cheap,” Corbyn said over the weekend. “The police and security services must get the resources they need, not 20,000 police cuts.”

In response, May insisted that her government had "protected the counterterrorism policing budget," increased the number of armed police officers after several years when it fell, and funded the intelligence services to hire 1,900 more staff.

She also vowed to crack down on terrorism suspects, adding that “if our human rights laws stop us from doing it, we will change the laws so we can do it."

The terror attacks were not the only reason May lost ground in the polls. The prime minister’s campaigning style was criticized as stiff and lackluster, and some Conservative policy proposals got a hostile reception, including a plan to make pensioners pay for more of their care.

Corbyn, meanwhile, revealed himself to be an unexpectedly savvy campaigner and unveiled several promises that proved popular with the public, including increased spending on the National Health Service, schools and police, as well as the nationalization of railroads and utilities.

Rachel Sheard, who cast her vote near the site of the London Bridge attack, said the election had not gone as expected -- and that it certainly wasn't about Brexit.

"I don't think that's in the hearts and minds of Londoners at the minute, (not) nearly as much as security is," said Sheard, 22. "It was very scary on Saturday."

While security was on many voters' minds, it was far from the only issue.

"It's important, but it's only one issue amongst several," said 68-year-old Mike Peacroft. "I wouldn't necessarily say it's at the top. Obviously at my end of the (age) spectrum I'm more interested in things like pensions and so forth, NHS health care -- plus schooling, those are really my main concerns."

In her final message to voters, May tried to put the focus back on Brexit.

"I can only build that better country and get the right deal in Brussels with the support of the British people," she said. "So whoever you have voted for in the past, if that is the future you want then vote Conservative today and we can all go forward together."

Corbyn told supporters at his final rally that Labour's campaign had "changed the debate and given people hope. Hope that it doesn't have to be like this; that inequality can be tackled; that austerity can be ended; that you can stand up to the elites and the cynics. This is the new center ground."