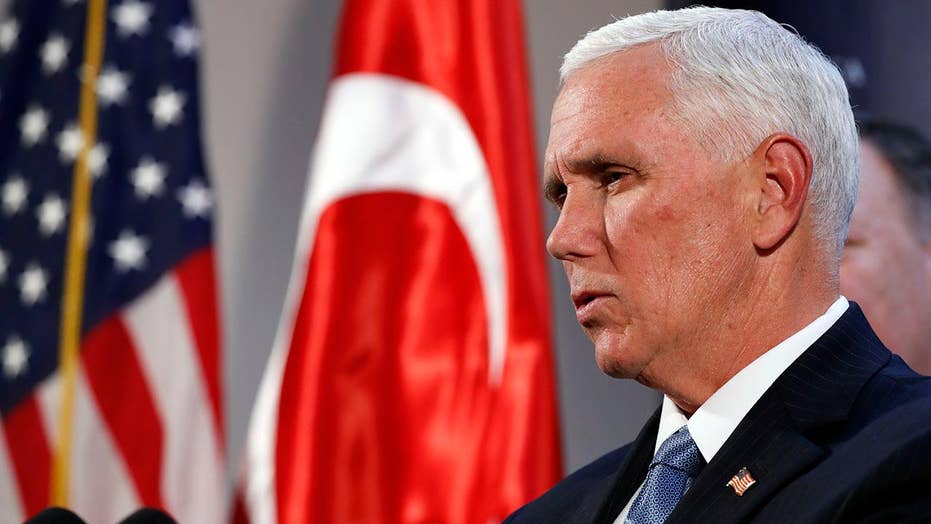 A very senior U.S. military source who spent years designing the U.S. anti-ISIS strategy with both the Kurds and the Turks expressed skepticism to Fox News on Thursday about the Turkey-Syria cease-fire announced earlier by Vice President Pence and Secretary of State Mike Pompeo.

The deal was announced after Pence and Pompeo met with Turkish President Recep Tayyip Erdogan on Thursday, and it calls for a 120-hour cease-fire. Turkey's military incursion into northeastern Syria last week, known as Operation Peace Spring, will pause during that time so Kurdish-led forces can pull back from a 20-mile-wide safe zone on the Turkish-Syrian border. The U.S. and Turkey agreed that the military operation will end entirely upon completion of the Kurdish withdrawal, according to the deal.

“There is no way the Kurds can leave that security zone," the military source told Fox News. "There are thousands of Kurds who live in what the Turks want as a buffer zone. That’s where these fighters’ families live. That is where they are from.”

In other words, thousands of Kurdish civilians live in the so-called buffer zone, according to the source.

Gen. Mazloum Abdi, the Syrian Kurdish military leader who serves as commander of the SDF, announced that he would accept.

A separate senior U.S. military source involved with the U.S. troop withdrawal in Syria, asked for an assessment of the pause in fighting, said: "Stopping the shooting is always a good thing. It buys us a little time."

But the source added, “General Mazloum says he will pull back. This is a tactical withdrawal by Mazloum. Kurds haven’t given up their aspirations."

"The Turks get what they want,” the second military source said, referring to the buffer zone along the border within Syria. “At some point, there will be more violence.”

There are signs already, this second senior source said, of “what some call ethnic cleansing," adding, There are "a lot of refugees on the roads."

“Cease-fire is always a good thing,” the military source said. “Strategically, not sure if it is a good thing.”

When asked if there was a problem with Turks going to Russia now to consult with Russian President Vladimir Putin and SDF leaders going to Russia, the source responded emphatically,: “Yeah, I have a problem," adding: “There are going to be second-, third-, fourth-order consequences. Some of which we can already see.”

Turkish officials said they "got what we wanted" out of the meeting with the U.S., but fell short of calling the agreement a cease-fire.

"We got what we wanted. This is not a cease-fire. We only halt our operations," Turkish Foreign Minister Mevlut Cavusoglu told the Middle East Eye (MEE) news outlet.

The joint agreement made for northeast Syria on Thursday did not explicitly use the term "cease-fire." Rather, under its measured terms, "the Turkish side will pause Operation Peace Spring in order to allow the withdrawal of YPG from the safe zone within 120 hours," and "Operation Peace Spring will be halted upon completion of this withdrawal."

The first senior U.S. military source also pointed out there are four or five Islamic State detention facilities in the buffer zone, asking, “What happens to those?”

When asked if the cease-fire will hold, the source responded: “I don’t believe it.”

"I don’t know that [Mazloum] would agree to this -- his goal is autonomy for the Kurds. Mazloum has already turned to Russia and [Syrian President Bashar al-Assad] now that the U.S. has indicated it will not help the Kurds," according to the senior military source.

Also of note is that Pence repeatedly referred to the Kurdish fighters -- whom the U.S. military rebranded as the SDF to fight ISIS -- as the YPG, which is the moniker that the Turks use to describe these Kurds. While it is true that the SDF is just a rebranded YPG, that Pence reference can be seen as a concession to Turkey, which was always angered that the United States had teamed up with the Kurds to fight ISIS.

When the second military source heard that Vice President Pence repeatedly called the Syrian Democratic Force the YPG during the press conference in Ankara, the source paused and then said, “Oh my God.”

The U.S. military is still in the process of pulling out of Syria, the source said: “Our deliberate withdrawal continues.”

The source reiterated that U.S. troops, while consolidated having pulled back from outposts, now are still in harm’s way. The withdrawal is “still high risk," the source said.

“They are coming out by air and ground," the second source added. "A lot of bad people and proxies around."

According to the first senior military source, calling the SDF fighters YPG now basically says “what we are now saying to those individuals who fought with us [against ISIS is] you have no status.”

Pence said the U.S. "received assurances from the YPG that they will agree to the cease-fire," and that forces have already begun withdrawing from the Safe Zone.

The question this first source had is, what message are the Russians sending to Erdogan?

"Erdogan meets in five days (120 hours) with [Russian President] Vladimir Putin in Sochi. He met with the Russian envoy to Syria today before meeting the U.S. delegation," the source said. "What deal is NATO ally Turkey cutting with Russia? No one knows."

“This is no great diplomatic coup,” the senior U.S. military official said moments after the Ankara press conference. 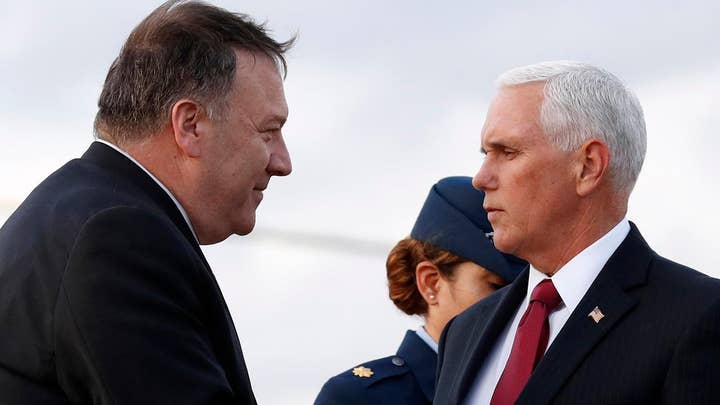 President Trump said it was "a great day for civilization" as the U.S. and Turkey struck an agreement.

"I am proud of the United States for sticking by me in following a necessary, but somewhat unconventional, path. People have been trying to make this 'Deal' for many years," the president said. "Millions of lives will be saved. Congratulations to ALL!"