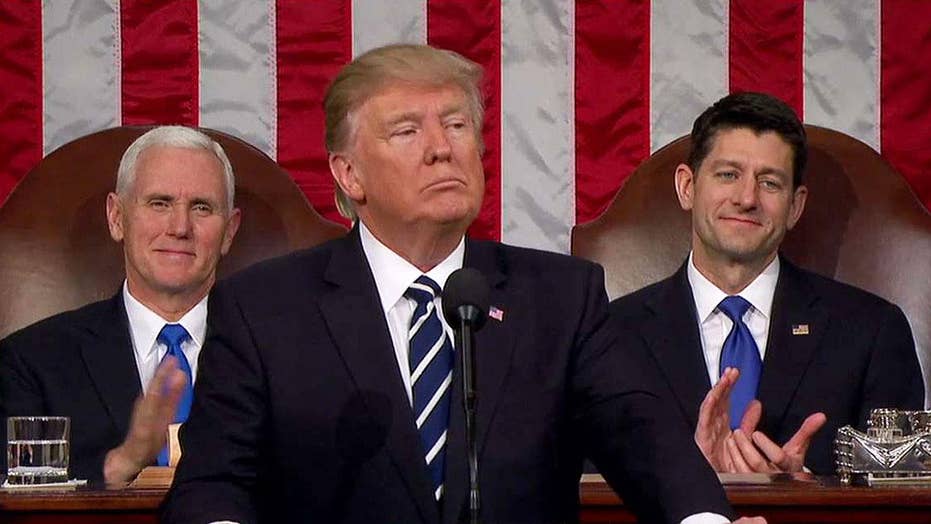 Beijing fired back Wednesday at President Trump's claim that the U.S. has "lost 60,000 factories" since China joined the World Trade Organization, with a top diplomat suggesting the president told only part of the story.

China's economic ties with the U.S. have lifted up both countries -- not to mention the rest of the world, foreign ministry spokesman Geng Shuang responded. He added that China was "willing to get along with the U.S. to jointly expand and deepen bilateral trade."

"We've lost more than one-fourth of our manufacturing jobs since NAFTA was approved, and we've lost 60,000 factories since China joined the World Trade Organization in 2001. Our trade deficit in goods with the world last year was nearly $800 billion dollars. And overseas, we have inherited a series of tragic foreign policy disasters," Trump said during his address to Congress Tuesday night.

TRUMP, IN SPEECH TO CONGRESS, CALLS TO 'RESTART THE ENGINE' OF AMERICA'S ECONOMY

Since his election, China has lobbed threat after threat toward the United States. Beijing claimed it could cut imports of major U.S. goods, including iPhones and Boeing jets, if the Trump White House imposed steeper tariffs.

China also warned of a looming "military clash" after Rex Tillerson shamed Beijing over its military buildup in the South China Sea, during his confirmation hearing for Secretary of State.

U.S., European and other foreign companies have complained of unfair competition in China, where they've been barred from or sharply restricted in telecom, information technology, finance and other promising industries in violation of Beijing's free-trading pledges.

Meanwhile, Trump did not mention Russia by name during his speech -- but the Kremlin claimed it wasn't offended. Dmitry Peskov, spokesman for Russian President Vladimir Putin, said it was "natural" that Trump was "busy with American affairs while our president Putin is busy with Russian affairs."

Also Wednesday, Japan welcomed Trump's pledge to propose a budget with one of the largest increases in defense spending in U.S. history.

Chief Cabinet Secretary Yoshihide Suga said Wednesday that Japan would have to see what the actual figure was, but that he expected it to strengthen the U.S.-Japan alliance and contribute to global stability.

Japanese officials have considered the alliance vital given the North Korea missile and nuclear threat and China's military expansion in the Pacific.