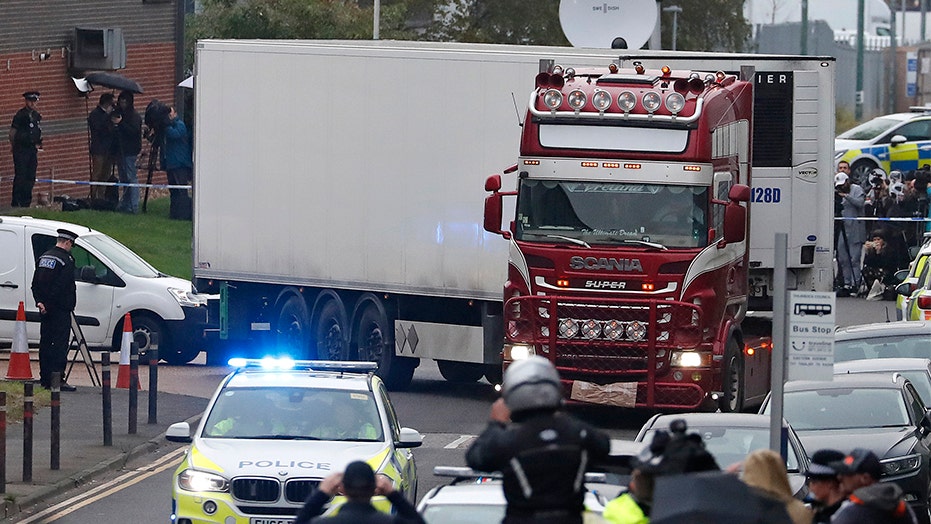 A Northern Ireland truck driver pleaded guilty Monday to a conspiracy charge in the smuggling-related deaths of 39 individuals from Vietnam last month.

Prosecutors wrung the guilty plea from Maurice Robinson, 25, who still faces charges of manslaughter in connection with the migrant deaths. The 39 bodies were found in a refrigerated container in Essex.

Police escort the truck that was found to contain the bodies away from an industrial area in Thurrock, south England. (AP)

“The offenses outstanding against him remain the 39 counts of manslaughter as well as transferring criminal property and conspiracy to commit a human trafficking offense,” police said in a statement.

Robinson told the court he conspired with others from May 1, 2018, to Oct. 24, 2019 to assist unlawful immigration and acquired cash that he knew or suspected came from criminal conduct, Reuters reported.

Prosecutor William Emlyn Jones said during the hearing that it was likely to be a large and complex case, according to Reuters.

On Sunday, the Essex police said Christopher Kennedy, 23, also of Northern Ireland, had been arrested in connection with the investigation. He was charged with conspiracy to arrange people trafficking and conspiracy to break U.K. immigration law.

A third suspect was being held in Ireland.

Two other suspects from Northern Ireland, brothers Ronan and Christopher Hughes, were being sought, The New York Times reported.

Police in Vietnam have arrested 10 people in connection with the deaths.