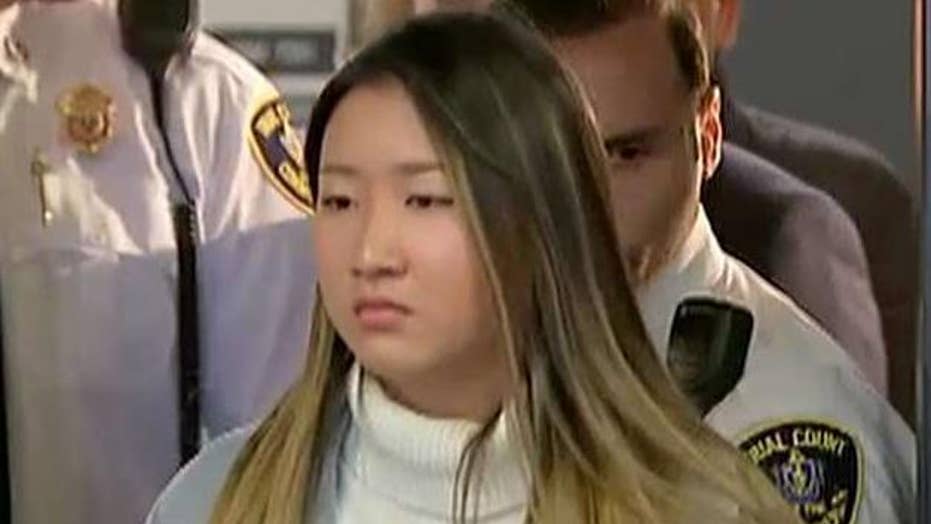 A former Boston College student who prosecutors say sent texts encouraging her boyfriend to kill himself pleaded not guilty Friday to a manslaughter charge.

Inyoung You, 21, entered the plea to an October indictment charging her with sending more than 47,000 texts to Alexander Urtula, 22, of New Jersey in the weeks before his May 20 suicide in Boston.

She showed no expression as prosecutors detailed the case against her at the arraignment.

The court appearance came after You returned to the U.S. from South Korea, NBC 10 Boston reported.

The judge released You on $5,000 and ordered her to surrender her passport and report to probation twice a week, according to the station.

The trial date was set for November 2020.

EX-BOSTON COLLEGE STUDENT ACCUSED OF URGING BOYFRIEND TO KILL HIMSELF CLAIMS SHE DID OPPOSITE, RELEASES TEXTS

At the arraignment, prosecutors told the judge You became upset when she found out Urtula had been in touch with a former girlfriend.

Prosecutor Caitlin Grasso told the judge that when Urtula jumped from the roof of a parking garage to his death, You was present. She had tracked him through his cellphone, the prosecutor said.

Grasso said the investigation revealed that You "became physically, verbally and psychologically abusive towards Mr. Urtula during the court of their year-and-a-half-long relationship."

Grasso also read from some of the texts You sent her boyfriend.

The station reported that two days before the suicide she texted him, "You can’t figure it out? You want to make me livid again? You want me to slash my throat? Is that what you want? Like, why do I have to threaten my own f------ life for you to finally do something? Did I not f------ tell you to read my texts? Now, if you do not read it right now, I’m literally going to f------ slash my throat and take a video, saying it was because of you and that I want you to see it."

You hired a public relations firm that released text messages suggesting she tried to stop Urtula from killing himself, Fox 25 Boston reported. Urtula jumped to his death from the top of a parking garage on the day of his graduation from Boston College.

You's prosecution has been likened to the suicide texting case that another Massachusetts prosecutor brought against Michelle Carter in 2017.

Carter went to prison after a judge found her guilty of sending texts encouraging her boyfriend to kill himself, which he ultimately did.