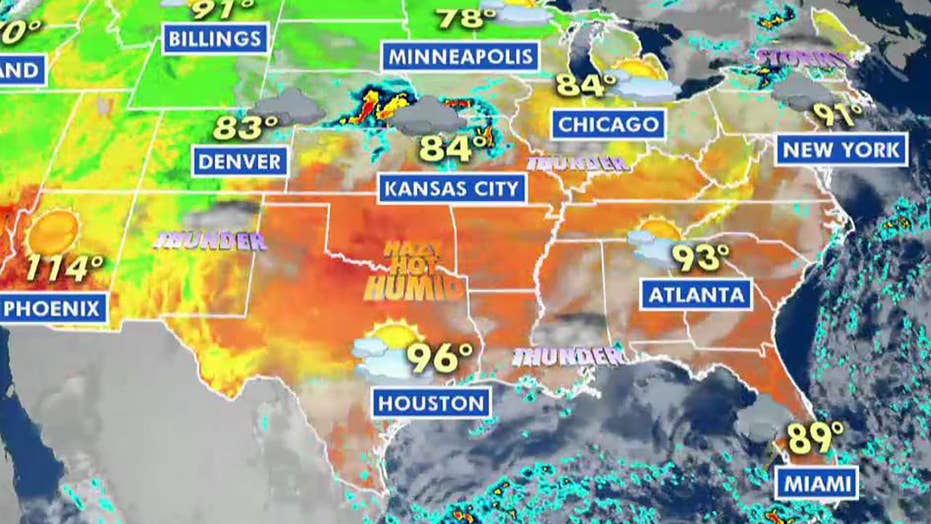 The third named storm of the Atlantic hurricane season formed Tuesday far out over the North Atlantic, ending a stretch of over one month without any tropical systems as the season approaches its peak in the weeks ahead.

The National Hurricane Center said that Tropical Storm Chantal is moving east around 20 mph with 40 mph winds, and is located about 455 miles south of Cape Race, Newfoundland as of 11 a.m. on Wednesday.

"The good news is it is staying offshore, but that's a good reminder that these things can pop up at any time we are into hurricane season," Fox News Senior Meteorologist Janice Dean said on "Fox & Friends."

The tropical storm is no threat to any land areas, and there are no coastal watches or warnings in effect.

Tropical Storm Chantal formed Tuesday night, but is not forecast to affect any land in the next several days before weakening. (Fox News)

"Gradual weakening is anticipated, and Chantal is forecast to become a tropical depression in a couple of days," the NHC said.

Chantal formed at 40.2 degrees north latitude, which made it the farthest north a tropical Atlantic cyclone has formed since Alberto in 1988, according to Colorado State University hurricane scientist Phil Klotzbach. Klotzbach also noted that Atlantic basin went from July 15 to Aug. 19 with zero named storms, becoming the first hurricane season to do so since 1982.

So far in 2019, the only tropical activity in the Atlantic has been subtropical storm Andrea that formed on May 21 and quickly fizzled a day later over the Atlantic, southwest of Bermuda. Hurricane Barry, the second storm, made landfall in Louisiana on July 13 as a Category 1 storm.

Earlier this year, forecasters from the National Oceanic and Atmospheric Administration said an ongoing El Nino was helping to suppress activity during the first half of the hurricane season, which runs from June 1 to Nov. 30. Through the middle of August, the NHC also shared that there was no tropical cyclone activity in the Atlantic basin.

A satellite image posted by the agency showed the appearance of Saharan dust over the ocean.

Saharan Dust, also known as Saharan Air Layer,  is comprised of sand, dirt, and other dust that is lifted into the atmosphere from the vast desert area that covers most of North Africa, according to MyFoxHurricane.

"The Saharan Air Layer is a well-mixed dry pocket of air that usually resides between 5,000 and 15,000 feet above sea level," MyFoxHurricane notes. "Since one of the key ingredients for tropical cyclone development is a deep feed of moisture, Saharan Dust often acts to inhibit tropical development."

"Overall stability across the tropical Atlantic appears to be our greatest asset so far, but late Aug-Sep-Oct climo can negate that in a hurry," Lowry wrote in a subsequent tweet.

NOAA has advised in its mid-season outlook that conditions in the Atlantic are leading to conditions that are more favorable for tropical activity in September and October, the busiest months of hurricane season.

NOAA forecasters are now calling for 10-17 named storms with winds of 39 mph or higher, of which five to nine could strengthen into hurricanes. Of those storms, there will be two to four major hurricanes, which are classified as Category 3, 4, and 5 with winds of 111 mph or higher.

Tropical waves that historically have the potential to develop into tropical systems continue to move off the west coast of Africa, but so far have not developed into anything in 2019.

"While we don't foresee development over the next few days, we can't rule out something slowly taking shape over the central Atlantic beyond this week and beyond due to the overall decrease in wind shear, dry air and dust across the Atlantic basin," AccuWeather Hurricane Expert Dan Kottlowski said.

In the Gulf of Mexico, an enhanced batch of showers and thunderstorms may affect the coast of Texas, but wind shear is expected to deter any tropical development in the region, according to AccuWeather.