Barry made landfall just before 2 p.m. Saturday afternoon near Intracoastal City in Louisiana as a tropical storm, just hours after it was briefly upgraded to a Category 1 hurricane.

The National Weather Service said the storm brought with it 70 mph winds while forecasters warned of dangerous storm surge and heavy winds to the region.

National Hurricane Center director Ken Graham said that Barry had gathered "a big slough of moisture" and was expected to dump rain on the area throughout the weekend.

The storm is expected to inflict the most damage on Louisiana and parts of Mississippi, with wind and rain affecting more than 3 million people.

Videos showed water overtopping a levee in Plaquemines Parish south of New Orleans, where fingers of land extend deep into the Gulf of Mexico. Officials were still confident that the levees would hold firm.

More than 70,000 customers were without power Saturday morning, including nearly 67,000 in Louisiana and more than 3,000 in Mississippi, according to poweroutage.us.

The storm strengthened into a Category 1 hurricane briefly, with maximum sustained winds of 75 mph, just above the threshold to be a hurricane. However, when it made landfall, it was downgraded again to a tropical storm. It is expected to weaken again and become a tropical depression on Sunday. 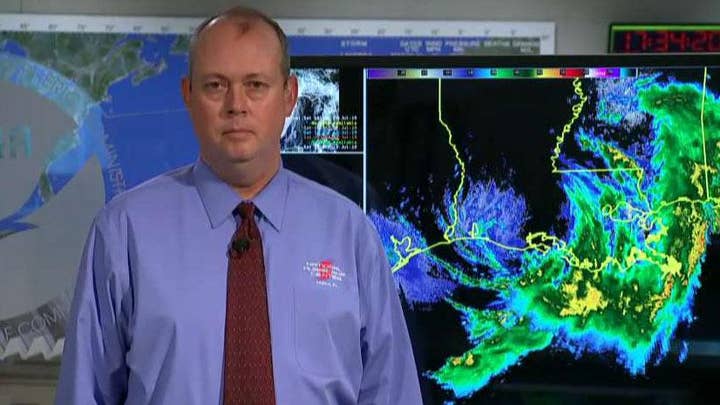 The Coast Guard rescued more than a dozen people from the remote Isle de Jean Charles, south of New Orleans, where water rose so high that some residents clung to rooftops. But in the city, locals and tourists wandered through mostly empty streets under a light rain or stayed indoors.

Downpours also lashed coastal Alabama and Mississippi. Parts of Dauphin Island, a barrier island in Alabama 200 miles (322 kilometers) from where Barry was headed, were flooded both by rain and surging water from the Gulf, said Mayor Jeff Collier, who was driving around in a Humvee to survey damage. He said the island still had power early Saturday afternoon and wind damage was minimal. 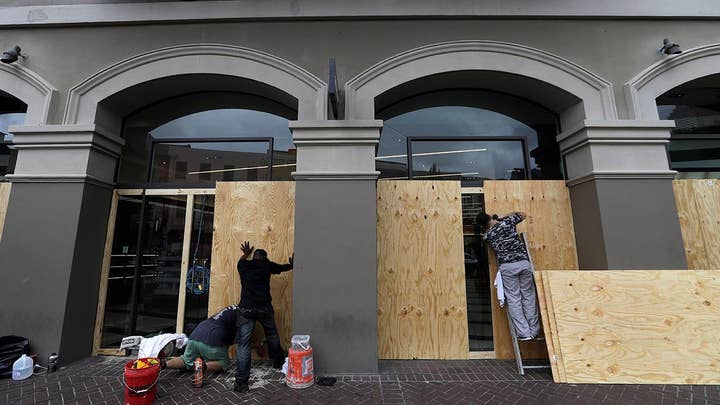 "That is just an amazing amount of moisture," he said. "That is off the chart."

New Orleans Mayor LaToya Cantrell thanked residents for staying off the streets and urged them to remain vigilant because the worst of the wind and rain was yet to arrive.

"Although you may not have seen rainfall as we have been discussing, it is coming our way," Cantrell said.

Hurricane Katrina caused catastrophic flooding in New Orleans in 2005, and was blamed for more than 1,800 deaths in Louisiana and other states, by some estimates. 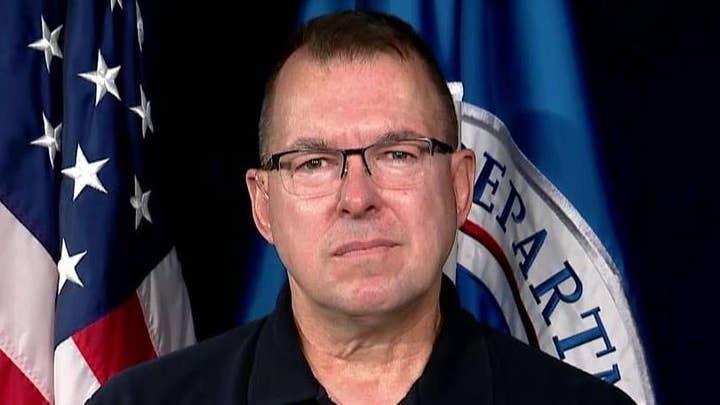 In Katrina's aftermath, the Army Corps of Engineers began a multibillion-dollar hurricane-protection system that isn’t complete. The work included repairs and improvements to some 350 miles of levees and more than 70 pump stations that are used to remove floodwaters.

President Trump has already declared a state of emergency for Louisiana, authorizing federal disaster relief efforts. And about 10,000 people in Plaquemines Parish on Louisiana's low-lying southeastern tip were ordered evacuated on Thursday.

New Orleans is particularly vulnerable to flooding because of its low elevation. Only about half the city is above sea level — a drop from what once was 100 percent, according to the Atlantic, which cited human activity as a primary reason for the drop.

The sky is cloudy as over Lake Pontchartrain on Lakeshore Drive as little flooding is reported in New Orleans, ahead of Tropical Storm Barry making landfall on Saturday, July 13, 2019. (AP Photo/Matthew Hinton)

Louisiana Gov. John Bel Edwards warned that the storm's impact, coupled with the already-high Mississippi River --which has been swelled by heavy rain and snowmelt upriver this spring -- could be a dangerous combination.

"There are three ways that Louisiana can flood: storm surge, high rivers and rain," Edwards said. "We're going to have all three."