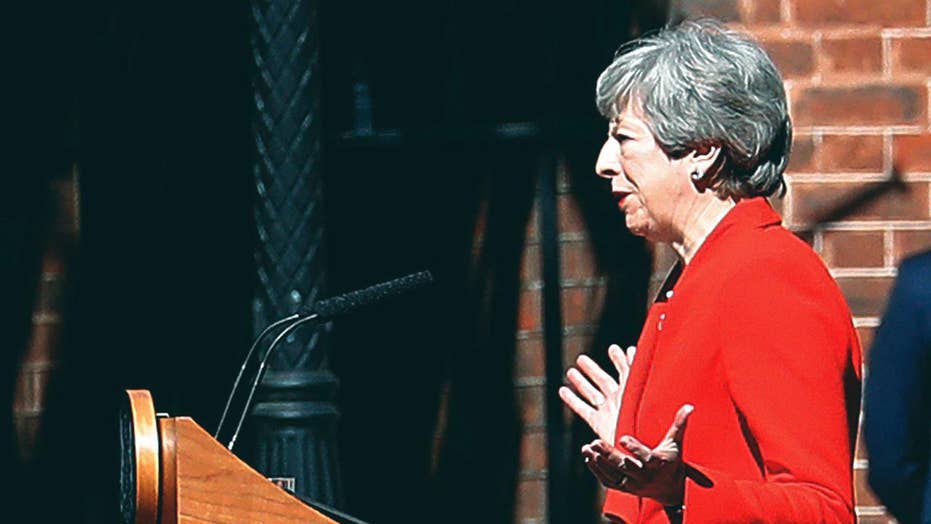 John Browne, former U.K. parliament member, weighs in on who he believes will be the next prime minister.

With Prime Minister Theresa May’s announcement Friday that she is stepping down from 10 Downing Street, the race to succeed her is heating up -- and the boisterous, pro-Trump former Foreign Secretary Boris Johnson is the favorite to lead Britain.

May announced that she will stand down on June 7, and a leadership election to head the Conservative Party will formally begin days later, with whoever wins becoming prime minister as well. That leadership battle will be fought almost exclusively on one issue alone -- Brexit.

May succeeded former Prime Minister David Cameron, who announced his resignation the day after the 2016 Brexit vote in part because he campaigned for Britain to remain in the E.U. But May too voted to “Remain,” leading to fears from Brexiteers that she was not the right person to step in and craft Britain’s departure from the bloc. That prediction appeared prescient when her withdrawal agreement was voted down multiple times by Parliament and has led to Brexit being delayed until the end of October.

"I believe it was right to persevere even when the odds against success seemed high. But it is now clear to me that it is in the best interests of the country for a new prime minister to lead that effort," she said Friday.

It means that this time, it could be the turn of the Brexiteers to take charge and see what they can do to break the Brexit impasse. With the newly formed Brexit Party likely to be the runaway winners of Thursday’s European elections, sending the Conservatives into fourth or even fifth place, Tories picking their next leader are likely to be concerned about hemorrhaging voters if they don’t elect someone sufficiently pro-Brexit.

It is perhaps partly for this reason that Johnson, who played a central role in the 2016 “Leave” campaign and resigned as foreign secretary last year over May’s handling of Brexit, is currently the bookmakers' favorite to be the next PM.

"It is as though we are sending our vanguard into battle with the white flags fluttering above them," he wrote of May’s handling of Brexit in a searing resignation letter last year. In private, he reportedly called her plan a “turd.”

The humorous and sometimes buffoonish Johnson has been in the public eye for decades, from his time as a journalist for The Daily Telegraph, to his appearances on comedy panel show “Have I Got News For You,” his two terms as London mayor, and of course his time as an MP and foreign secretary. He has also been dogged by allegations of infidelity, which are believed to have contributed to Johnson and his wife announcing last year that they are divorcing.

But it is not just the roles he has held, but how he has handled those roles that have resulted in him being Britain's best-known politician, and referred to by many Brits simply as “Boris” in a way that perhaps only Margaret Thatcher (who was known simply as “Maggie” by supporters and opponents alike) matched as a politician.

Politician Boris Johnson leaves his home, on the day of the European Parliament elections, in London, Thursday May 23, 2019. (PA via AP)

But unlike the Iron Lady, Johnson's career has been marked by gaffes, controversies, and a sheer flamboyance that makes him stand out among Britain’s otherwise on-message, sometimes bland parliamentarians.

“BoJo” has been left stuck dangling in the air on a zip line waving British flags (“This is great fun, but it needs to go faster,” he said as he brandished two Union Jack flags), he has rugby-tackled a small child and is known for his outrageous remarks (He once described former Prime Minister Tony Blair as “a mixture of Harry Houdini and a greased piglet”) -- although those remarks have frequently got him into hot water.

He came under fierce criticism last year for a Daily Telegraph column in which he defended Muslim women’s right to cover their faces, but said that such women look like “letter boxes” and bank robbers. His refusal to apologize sparked a national debate on the question of burqas and niqabs, and polls indicated his harder stance may have been more in tune with the majority of Brits.

His various controversies and fiery remarks may have once ruled him out of office. But amid a rise of outspoken populists in the West and a distrust of traditional politicians that saw Donald Trump elected U.S. president, those characteristics could in fact be Johnson’s biggest strength.

A Prime Minister Boris Johnson would also be greeted warmly by the White House. Johnson, who was born in New York, said last year that he is “increasingly admiring” of the U.S. president and that he is more convinced that "there is method in his madness." He then asked his audience to imagine the billionaire handling the Brexit negotiations.

“Imagine Trump doing Brexit,” Johnson said in remarks leaked to BuzzFeed News. “He’d go in bloody hard… There’d be all sorts of breakdowns, all sorts of chaos. Everyone would think he’d gone mad. But actually you might get somewhere. It’s a very, very good thought.”

He also ripped into Sadiq Khan, his successor as the Mayor of London, for telling Trump he was not welcome in the nation’s capital.

“We will not allow US-UK relations to be endangered by some puffed up pompous popinjay in City Hall,” he tweeted.

His remarks clearly endeared him to Trump, who said last year that Johnson “would make a great prime minister.”

“I have a lot of respect for Boris. He obviously likes me, and says very good things about me,” he told The Sun. “I was very saddened to see he was leaving government and I hope he goes back in at some point.”

“I think he is a great representative for your country,” he said.

Johnson has been a leading proponent of a “harder” Brexit. As other politicians present the acceptable options as either departure with some sort of deal with Brussels or a second referendum, Johnson has not ruled out a “no deal” exit, whereby Britain would revert to Word Trade Organization (WTO) trading terms with the E.U.

“The job of our next leader in the UK, he or she, is to get out of the EU properly and put Brexit to bed,” Johnson said Friday, according to Reuters.

Johnson’s bid is by no mean certain. His hardline views on Brexit could also lead moderates and pro-Remain Tories to unite behind a softer candidate as part of an anti-Boris coalition.

He was seen as a favorite in the 2016 leadership but declared he would not run after ally Michael Gove decided to run as well -- leaving the path clear for May.