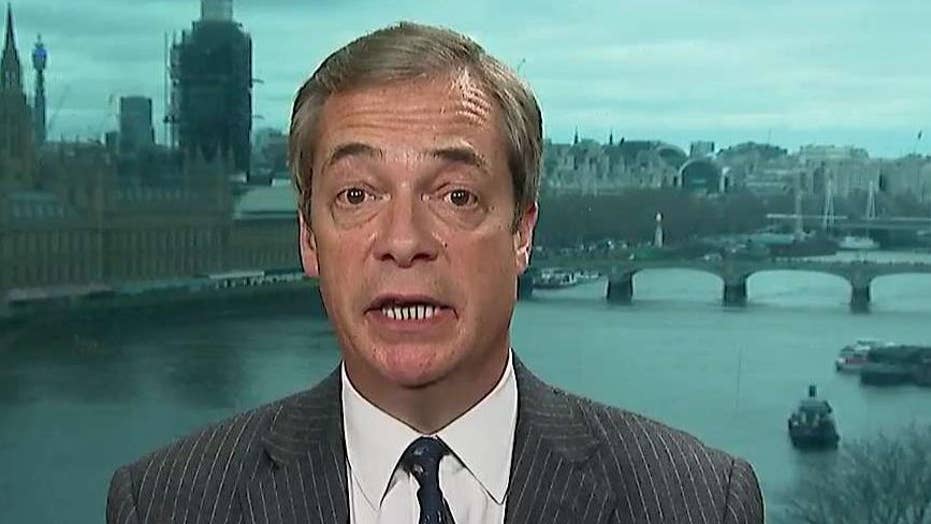 Nigel Farage: Brexit mess one of the most 'shameful episodes in the history of my country'

U.K. Prime Minister Theresa May’s Conservative Party is facing the prospect of a mauling in the upcoming European elections, with polls suggesting the governing party could finish as low as fifth place -- while Nigel Farage’s recently formed Brexit Party could emerge the big winner.

Farage, the former leader of the U.K. Independence Party and a Fox News contributor, formed the Brexit Party in January in response to the lengthy delay to Britain’s departure from the European Union and unhappiness surrounding May’s withdrawal agreement -- which Brexiteers say leaves Britain still bound to the E.U.

May’s agreement has now been voted down three times by Parliament and she has been forced to seek a delay until October as she reaches out to the left-wing Labour Party to come to an agreement that can get through the House of Commons. The stalemate means that Britain will participate in the European Parliament elections this month and elect MEPs to the chamber almost three years since the country voted to leave the bloc.

Brexit Party leader Nigel Farage gestures on an open-topped bus while on the European Election campaign trail in Sunderland, England, Saturday, May 11, 2019. (PA via AP)

Amid the seemingly endless stream of defeats and delays, polls are suggesting that May’s Tories will bear the brunt of the blame from Brits angry and exhausted by the Brexit saga, and will be punished severely when the country goes to the ballot box next week. Farage’s new party is capitalizing on anger in pro-Brexit areas at May’s handling of Brexit as well as the calls from politicians in both the Tory and Labour parties for a second referendum.

“Westminster has betrayed your vote for Brexit,” Farage said Tuesday, tweeting out a Brexit Party ad. “It’s time to fight back.”

That message appears to have struck a chord with voters. An Opinium Research poll last week predicted that the Tories will finish in fourth place with just 11 percent of the vote, behind the Liberal Democrats (12 percent), Labour Party (21 percent) and Farage’s Brexit Party comfortably in front with 34 percent.

While it isn’t clear how that would translate into seats, and British polls have sometimes misread the electorate in the last decade, it appears to foreshadow an electoral beatdown for the Tories -- and one that could have significant consequences for British politics. 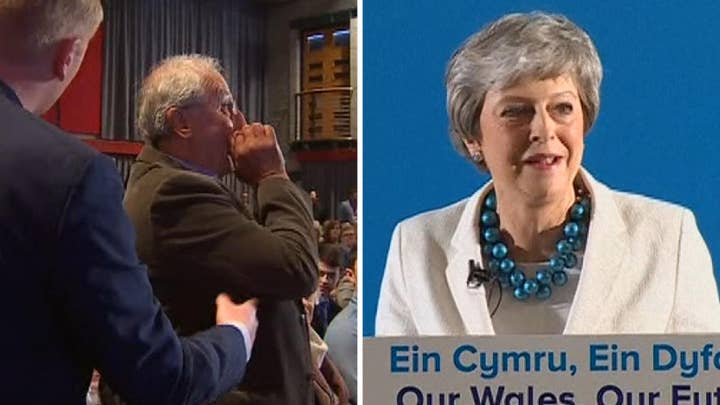 The damage appears not to be limited to the European elections for the Tories. Earlier this month, the Conservatives lost more than 1,000 seats in English local elections, although they remained the largest party overall. While a date for a national general election has not been set, ComRes found that if one was held today, Labour would be ahead with 27 percent, the Brexit Party would be in second place with 20 percent, and the Tories would be in third with 19 percent.

This isn’t Farage’s first experience surging to the front in a European election. As leader of the U.K. Independence Party, UKIP, he led the party to victory in the 2014 European elections, casting then-Prime Minister David Cameron’s Tories into third place. The Conservatives responded by promising to hold a referendum if re-elected in 2015 -- a promise Cameron kept, although he campaigned for Britain to stay in the bloc. Cameron resigned after a majority of Brits voted to leave.

May, Cameron’s replacement, is likely to see the pressure for her to step down ramp up significantly if the Tories are given a drubbing next week. She survived a push from members of her own party to oust her in December, and is therefore protected from another such vote until the end of this year. But if one election thrashing turns into two, those calls for her to step down voluntarily are likely to heat up.

May has indicated she won’t stay in office for the next general election, and The Times of London reported that she will meet with her party’s 1922 Committee this week, where she is likely to face further pressure to name a timetable for her departure from 10 Downing Street.