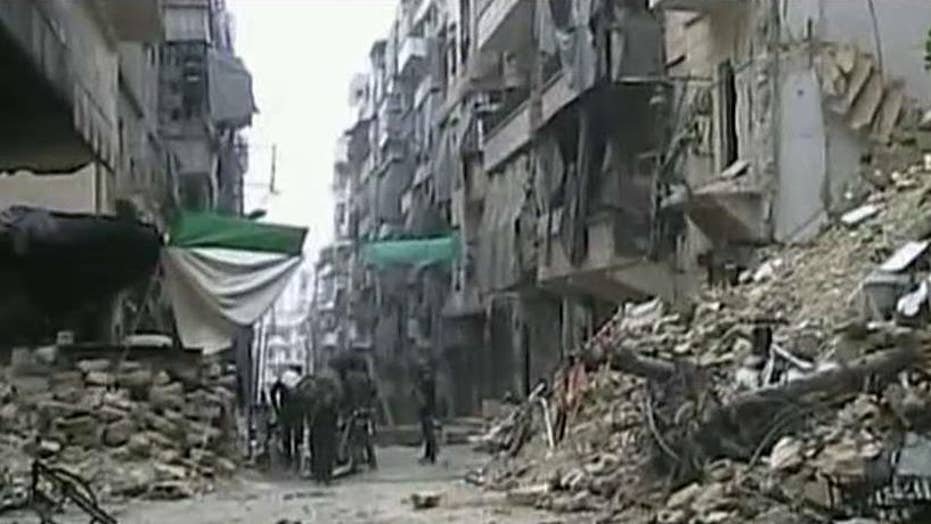 BEIRUT – The Syrian military and allied fighters, backed by Russian airstrikes, on Friday pushed ahead with a major offensive in the north of the country, capturing another village and moving a step closer to encircling contested Aleppo, Syria's largest city.

The offensive near the Turkish border, which began earlier this week, has sent tens of thousands of residents fleeing. Turkey has said about 10,000 Syrians have amassed on the Syrian side of the Turkish border and that about 70,000 more were on their way.

Russian air force activity in Syria has also led to increased violations of Turkish airspace, Stoltenberg said in Amsterdam, on the sidelines of a meeting of EU defense ministers. "This creates risks, heightened tensions and is of course a challenge for NATO because they're violations of NATO's airspace," he said.

The Syrian government offensive comes at a time when hopes for a peace deal are increasingly dim, amid signs of possible further foreign military intervention.

Earlier this week, a U.N.-led attempt to launch indirect talks between a government delegation and opposition representatives in Geneva was adjourned after several days of acrimonious bickering.

At the same time, the Russian military said Thursday it had "reasonable grounds" to suspect that Turkey is making intensive preparations for a military invasion of neighboring Syria, while a Saudi military spokesman said the kingdom is ready, in principle, to send ground troops to Syria to fight Islamic State group extremists.

In Friday's fighting, pro-government troops retook the village of Rityan north of Aleppo, one of several communities they captured in the area this week, according to the state news agency SANA and the Britain-based Syrian Observatory for Human Rights.

The Observatory, an opposition monitoring group, said pro-government troops were backed by Russian airstrikes. It said that by taking Rityan, the government secured a road that links the predominantly Shiite villages of Nubl and Zahraa. These villages had been encircled by rebels for more than three years, but government troops broke the siege earlier this week.

In capturing another community Friday, the government also moved a step closer toward surrounding Aleppo.

The city, Syria's one-time commercial center, has been carved up between government and rebel-held districts since the summer of 2012. A government siege of Aleppo and its rebel strongholds would deal a potentially devastating blow.

Also Friday, the Syrian army and allied militias retook the town of Atman near the southern city of Daraa, located between the capital Damascus and the Jordanian border, according to the Observatory and Syrian state media

The Observatory said the capture opened several supply routes to Daraa, which is divided between government and opposition fighters. Troops advanced under the cover of heavy artillery bombardment and air power, the Observatory said.

Daraa was the scene of some of the first protests against Assad in 2011 and holds symbolic value in the narrative of the uprising that has since collapsed into a vicious civil war.