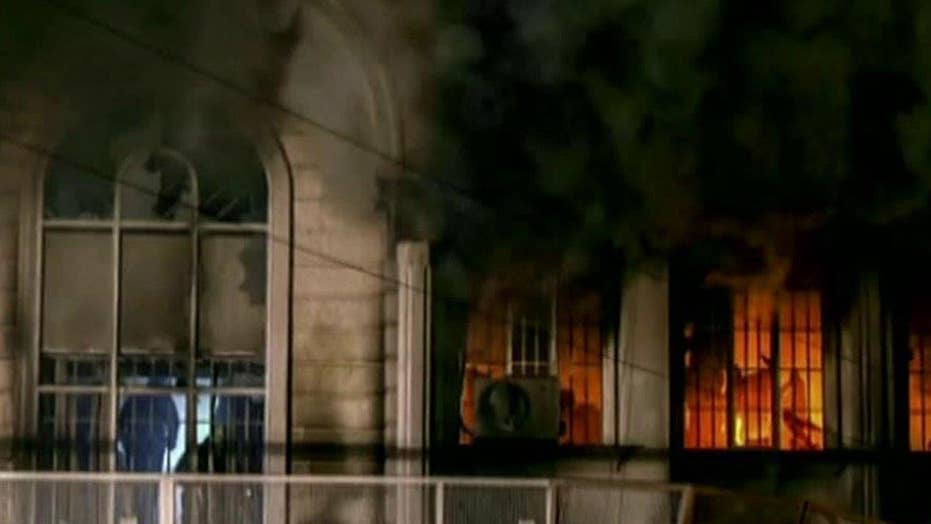 Saudi Arabia announces it is cutting ties with Iran

Saudi Arabia cut ties with Iran, the Kingdom’s foreign minister announced on Sunday, deciding "enough is enough" with the Islamic Republic, according to a source with knowledge of the Saudi government's thinking.

"Enough is enough," the source, who spoke on condition of anonymity, told Reuters. "Again and again Tehran has thumbed their nose at the West. They continue to sponsor terrorism and launch ballistic missiles and no one is doing anything about it. The Saudis really don't care if they anger the White House."

The move comes amid escalating tensions between the countries following Saudi Arabia’s execution of a prominent Shiite cleric on Saturday. A group of Iranians attacked the Saudi Embassy in Tehran with Molotov cocktails and stones earlier Sunday following the death of Sheikh Nimir al-Nimir, and the Saudis have indicated they don't believe the Iranian government tried to stop the protesters.

Saudi Arabia has ordered its personnel back from Iran and asked the Iranian diplomatic mission and other entities to depart the Kingdom within 48 hours, Reuters reported.

The Obama administration urged "diplomatic engagement" between the countries.

"We believe that diplomatic engagement and direct conversations remain essential in working through differences and we will continue to urge leaders across the region to take affirmative steps to calm tensions," U.S. State Department Spokesperson John Kirby said in a statement.

Al-Nimr, who was convicted of terrorism charges but denied ever advocating violence, was executed Saturday along with 46 others, including three other Shiite dissidents and a number of Al Qaeda militants. Al-Namir was a key leader in the Arab Spring protests in Saudi Arabia before his arrest in 2012. His execution drew condemnation from Shiites across the region as well as several countries outside Iran.

Iran's Supreme Leader Ayatollah Ali Khamenei condemned the execution Sunday in a statement on his website, saying al-Nimr "neither invited people to take up arms nor hatched covert plots. The only thing he did was public criticism."

Iran’s Revolutionary Guard also lashed out at Saudi Arabia Sunday. They compared the executions to attacks carried out by ISIS. The Guard said in a statement that Saudi Arabia’s “medieval act of savagery” in putting al-Nimir death will lead to the “downfall” of the monarchy.

The Guard promised “harsh revenge” against the Saudi royals for the execution, according to Reuters.

The cleric's execution could also complicate Saudi Arabia's relationship with the Shiite-led government in Iraq. The Saudi Embassy in Baghdad reopened for the first time in nearly 25 years on Friday. On Saturday there were public calls for Prime Minister Haider al-Abadi to shut the embassy down again.

Sunni Saudi Arabia and Shiite Iran are already locked in a bitter rivalry, and support opposite sides in the wars in Syria and Yemen. Iran accuses Saudi Arabia of supporting "terrorism" in part because it backs Syrian rebel groups, while Riyadh points to Iran's support for the Lebanese Hezbollah and other Shiite militant groups in the region.