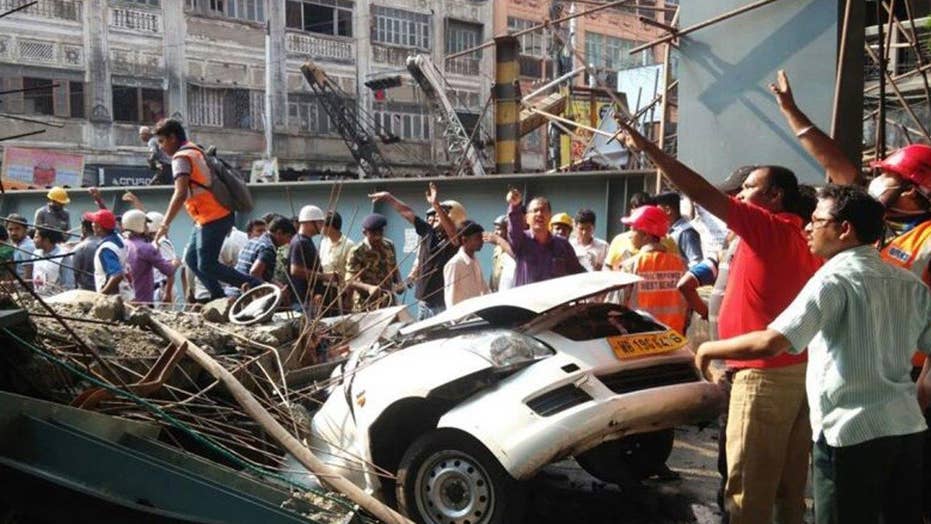 Rescue crews and army troops were in a race against time Thursday in India to save 150 people believed trapped in a pile of crushed vehicles and concrete girders after a road overpass under construction collapsed in a crowded neighborhood, leaving at least 21 people dead.

The collapse occurred in Bara Bazaar, a busy residential and shopping area in Kolkata --  a city of approximately 4.5 million people -- and left scores injured.

Rescuers were using saws, small cranes and their bare hands to dig through the wreckage. Bloody legs of trapped people were seen jutting out of the rubble.

Police told Sky News that 150 people are believed to be trapped, while a witness told Reuters that two buses carrying more than 100 passengers were stuck under the debris.

Yogesh Sharma was sitting at a small roadside tea stand with friends when the overpass, which spanned nearly the width of the city street and was designed to ease traffic through the densely crowded neighborhood, "came down with a huge crashing sound.

"I left my cup of tea and ran," said Sharma, a 23-year-old resident of the neighborhood. "I was crying at the spot."

At least 21 people were killed in the collapse, a police official told The Associated Press on condition of anonymity because he was not authorized to speak to the media.

"The area was very, very crowded. Motorized rickshaws, taxis . . .  there was a lot of traffic," one witness told the New Delhi Television news channel, or NDTV.

Another added: "We heard a loud rumble and then saw a lot of dust in the sky."

Army troops joined efforts to rescue those trapped inside cars, trucks and other vehicles that lay under massive concrete blocks and metal debris.

Huge cranes and other rescue equipment reached the site after the collapse and began clearing the rubble. Workers also used gas cutters to pry open the slabs.

More than 70 injured were admitted to two hospitals in Kolkata, the capital of West Bengal state, hospital officials said.

Television footage from the site showed people passing water bottles through to those who are crying out for help from beneath the debris.

Some witnesses have been critical of the initial response, with one saying there appears to be very little coordination on the ground.

"The condition is pathetic. At this moment no one has any clue how many people are trapped," a police officer at the scene told Reuters.

"Most were bleeding profusely. The problem is that nobody is able to drive an ambulance to the spot," he said.

The contract for the overpass was signed in 2008 and it was expected to be completed in two years. She accused the previous communist government in West Bengal of not adhering to building regulations.

But a newspaper reported last year that Banerjee wanted the overpass finished ahead of schedule in February, despite concerns from project engineers over whether or not it would be possible, according to Sky News.

"We completed nearly 70 percent of the construction work without any mishap," said K.P. Rao, a top official of IVRCL Infrastructure company, which was building the overpass. "We have to go into the details to find out whether the collapse was due to any technical or quality issue."

"It was a total act of God,'" said his colleague, Dilip, who uses one name.

Building collapses are common in India, where builders use poor enforcement of regulations and use substandard materials.