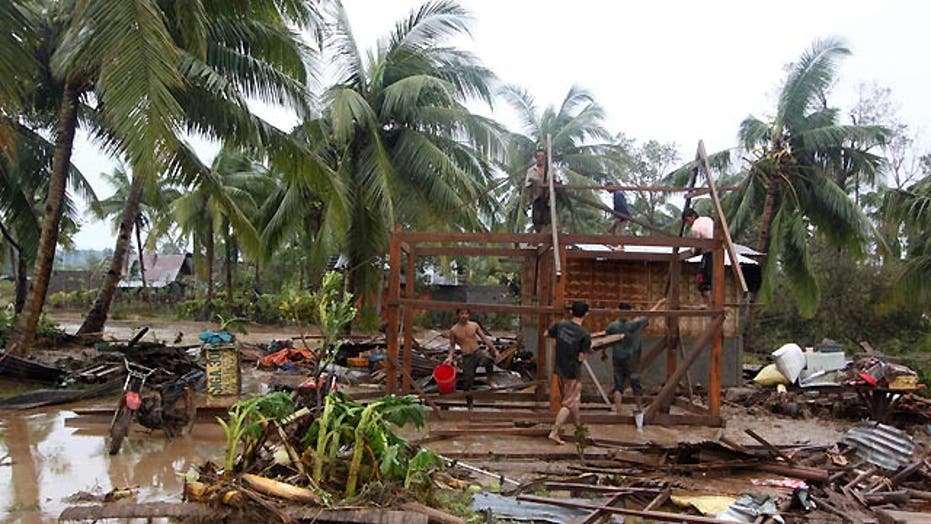 Around the World: Powerful typhoon hits the Philippines

MANILA, Philippines – At least 33 villagers and soldiers drowned in a southern Philippine town Tuesday when torrents of water dumped by a powerful typhoon cascaded down a mountain, engulfing emergency shelters and an army truck, officials said. The deaths raised the toll from one of the strongest storms to hit the country this year to at least 41.

Gov. Arturo Uy said rain from Typhoon Bopha accumulated atop a mountain and then burst down on Andap village in New Bataan town in hard-hit Compostela Valley province. The victims included villagers who had fled from their homes to a school and village hall, which were then swamped by the flash flood. An army truck carrying soldiers and villagers was washed away.

"They thought that they were already secure in a safe area, but they didn't know the torrents of water would go their way," Uy told DZBB radio.

He said the confirmed death toll in the town was likely to rise because several other bodies could not immediately be retrieved from floodwaters strewn with huge logs and debris.

Army troops and police were not able to reach the town because access roads were blocked, he said.

The storm, packing winds of 160 kilometers (100 miles) per hour and gusts of up to 195 kph (121 mph), toppled trees, triggered landslides and sent flash floods surging across the region's mountains and valleys.

The dead included three children who were buried by a wall of mud and boulders that plunged down a mountain in Marapat village, also in Compostela Valley. Their bodies were wrapped in blankets by their grieving relatives and placed on a stage in a basketball court.

"The only thing we could do was to save ourselves. It was too late for us to rescue them," said Valentin Pabilana, who survived the landslide.

In Davao Oriental, a poor agricultural and gold-mining province about 1,000 kilometers (620 miles) southeast of Manila, an elderly woman was killed when her house was struck by a falling tree, said Benito Ramos, who heads the government's disaster-response agency.

The other casualties either drowned or were hit by trees, he said, adding that the death toll was expected to rise once soldiers and police gain access to villages isolated by floods, fallen trees and downed communications.

While some 20 typhoons and storms normally lash the archipelago nation annually, the southern provinces battered by Bopha are unaccustomed to fierce typhoons, which normally hit the northern and central Philippines.

A rare storm last December killed more than 1,200 people and left many more homeless and traumatized, including in Cagayan de Oro city, where church bells pealed relentlessly on Tuesday to warn residents to scramble to safety as a major river started to swell.

Officials were taking no chances this year, and President Benigno Aquino III appealed on national TV on Monday for people in Bopha's path to move to safety and take storm warnings seriously.

In Compostela Valley, authorities halted mining operations and ordered villagers to evacuate to prevent a repeat of deadly losses from landslides and the collapse of mine tunnels in previous storms.

Bopha, a Cambodian word for flower or a girl, is the 16th weather disturbance to hit the Philippines this year. Forecasters say at least one more storm may strike the country before Christmas.