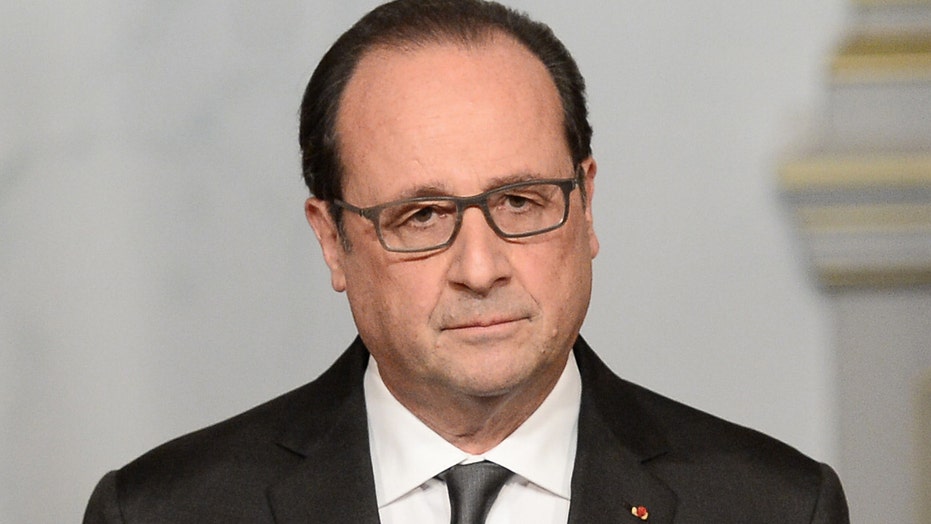 Eight ISIS terrorists wielding AK-47s and wearing suicide belts carried out coordinated attacks at six sites around Paris Friday night, killing at least 129 people and wounding at least 352 others, prompting French President Francois Hollande to condemn the attack as an "act of war" and vow that France "will be merciless toward the barbarians of Islamic State group."

Speaking after an emergency security meeting to plan his government's response, Hollande declared three days of national mourning and raised France's security to its highest level. Hollande said ISIS was "a terrorist army ... a jihadist army, against France, against the values that we defend everywhere in the world, against what we are: A free country that means something to the whole planet."

France is already bombing ISIS targets in Syria and Iraq as part of the U.S.-led coalition, and has troops fighting extremists in Africa.

ISIS claimed responsibility for the attacks and a Syrian passport was found on the body of suicide bomber at the Paris stadium. French authorities are urging any witnesses to come forward. One of the bombers was a young Frenchman previously flagged for links to Islamic extremism, police said. The man was among the attackers who blew himself up after a rampage and hostage-taking in a Paris concert hall, officials said.

ISIS, in an online statement, described Paris as "the carrier of the banner of the Cross in Europe" and described the attackers as "eight brothers wrapped in explosive belts and armed with machine rifles."

"Let France and those who walk in its path know that they will remain on the top of the list of targets of the IS," the statement also read, in part, "and that the smell of death will never leave their noses as long as they lead the convoy of the Crusader campaign."

French police said early Saturday they believed all of the attackers were dead but they were still searching for possible accomplices. The French prosecutor's office said seven of the eight assailants died in suicide bombings, the Associated Press reported.

American citizens were among the injured and the U.S. government was working closely with French authorities to identify the victims, the State Department said Saturday morning. During the night, the State Department said it was seeking to establish the whereabouts of 70 U.S. citizens known to be in France, but had not received word that any Americans had been killed in the attacks Friday night.

"The U.S. Embassy in Paris is working round the clock to assist Americans affected by this tragedy," deputy spokesperson Mark Toner said in a statement Saturday.

Authorities have closed the Eiffel Tower, the Louvre Museum and other top tourist sites in Paris until further notice. A Louvre spokeswoman said the museum opened as normal Saturday with enhanced security, but was ordered closed by the Culture Ministry after President Francois Hollande called for a national day of mourning. Isabelle Esnous, a spokeswoman for the Eiffel Tower, said the monument did not open as a security precaution. The Culture Ministry said "public cultural sites" were closed in the Paris region Saturday, without specifying.

Friday's attack was the deadliest terror atrocity to befall a Western European city since a series of train bombings in Madrid, Spain killed 191 people on March 11, 2004.

The most horrifying scene took place at the Bataclan concert hall near the center of Paris, where authorities said four attackers sprayed bullets into a crowd watching a performance by the American rock band Eagles of Death Metal. Reuters reported that the latest estimate from a Paris city hall official was that at least 87 people had died at the venue, though earlier reports suggested that as many as 118 concert-goers were killed.

The bloodshed prompted Hollande to declare a state of emergency, order the deployment of 1,500 troops around Paris and announce renewed border checks along frontiers that are normally open under Europe's free-travel zone.

The near-simultaneous assaults began at approximately 9:30 p.m. local time Friday (3:30 p.m. EST), when gunfire exploded outside of a restaurant in a trendy area east of the center of Paris known as Little Cambodia. It was the first of a series of attacks on a string of popular cafes, crowded on the unusually balmy Friday night. Paris prosecutor Francois Molins told reporters at least 37 people were killed in those shootings.

"There are lots of dead people," said a witness believed to have been at the bar of a restaurant that was the scene of one attack. "It’s pretty horrific to be honest. I was at the back of the bar. I couldn’t see anything. I heard gunshots. People dropped to the ground. We put a table over our heads to protect us."

A few moments later, three suicide bombs targeted locations around the Stade de France, the country's national stadium in the northern suburb of Saint-Denis, where Hollande had joined almost 80,000 soccer fans to watch an international friendly between France and Germany.

A police union official told the Associated Press that at least three people were killed as a result of those blasts.

Hollande was rushed from the stadium after the first explosion, as initial reports of the attacks trickled in. However, the match was not stopped and several thousand fans went onto the field after France's 2-0 win, apparently believing it was the safest place in the midst of the unfolding terror. Supporters were eventually allowed to leave the stadium in small groups, and some were caught on video singing France's national anthem as they left the venue.

Four attackers then stormed the Bataclan, where concert-goers described a horrifying scene. Witnesses said the attackers toted Kalashnikovs and wore flak jackets as they fired indiscriminately into the crowd. Some survivors claimed the men shouted "Allahu Akbar" or "This is for Syria" as they fired.

Graphic video shot from an apartment balcony and posted on the Le Monde newspaper's website Saturday captured some of the horror as dozens of people fled from gunfire outside the concert hall down a passageway to a side street.

The video shows at least one person writhing on the ground as scores more stream past, some of them bloodied or limping. The camera pans down the street to reveal more fleeing people dragging two bodies along the ground. Two other people can be seen hanging by their hands from upper-floor balcony railings in an apparent desperate bid to stay out of the line of fire.

"It looked like a battlefield, there was blood everywhere, there were bodies everywhere," Marc Coupris told the Guardian newspaper after being freed from the theater. "I was at the far side of the hall when shooting began. There seemed to be at least two gunmen. They shot from the balcony.

"I saw my final hour unfurl before me, I thought this was the end. I thought, 'I’m finished, I’m finished,'" Coupris said.

Sylvain, 38, collapsed in tears as he recounted the attack, the chaos, and his escape during a lull in gunfire. He spoke on condition that his full name not be used out of concern for his safety.

"I was watching the concert in the pit, in the midst of the mass of the audience," he told the Associated Press. "First I heard explosions, and I thought it was firecrackers."

"Very soon I smelled powder, and I understood what was happening. There were shots everywhere, in waves. I lay down on the floor. I saw at least two shooters, but I heard others talk. They cried, 'It's Hollande's fault.' I heard one of the shooters shout, 'Allahu Akbar'".

Sylvain was among dozens of survivors offered counseling and blankets in a municipal building set up as a crisis center.

The carnage inside the music venue ended around midnight local time when French police stormed the building. As police closed in, three detonated explosive belts, killing themselves, according to Paris police spokesman Michel Cadot. Another attacker detonated a suicide bomb on Boulevard Voltaire, near the music hall, the prosecutor's office said.

"I saw my final hour unfurl before me, I thought this was the end. I thought, 'I’m finished, I’m finished.'"

— Witness to attack on restaurant

A U.S. military and intelligence source told Fox News the coordinated attacks likely required "months of planning," based on their sheer number, the locations including a site where the president was present and the variety of weapons used.

President Barack Obama, speaking to reporters in Washington, decried an "attack on all humanity and the values that we share," calling the Paris violence an "outrageous attempt to terrorize innocent civilians."

A U.S. official briefed by the Justice Department says intelligence officials were not aware of any threats before Friday's attacks.

The violence raises questions about security for the millions of tourists who come to Paris — and for world events the French capital routinely hosts.

Some 80 heads of state, including possibly Obama, are expected for a critical climate summit in two weeks. In June, France is to host the European soccer championship — with the Stade de France a major venue.

And Paris-based UNESCO is expecting world leaders Monday for a forum about overcoming extremism. Iranian President Hassan Rouhani canceled a trip because of Friday's attacks. Hollande canceled a planned trip to this weekend's G-20 summit in Turkey.

The soccer stadium where a match between France and Germany was going on as the attack began is shown.

The attacks spanned at least two Paris districts, the 10th and 11th arrondisements. The 10th arrondisement is a cosmopolitan district lined with restaurants and cafes. It also is the location of the two famed train stations Gare du Nord and Gare de l’Est. The 11th arrondissement is located on the Right Bank of the River Seine and is one of the capital’s most populated urban districts, with nearly 150,000 residents. In recent years it also has emerged as one of the trendiest of the city's neighborhoods.

Terror struck in Paris near the same neighborhood earlier this year, when two Islamic radical gunmen stormed the offices of satirical magazine Charlie Hebdo, killing 12 and wounding 11. The gunmen, brothers Said and Cherif Kouachi, struck to avenge Muslims for the magazine’s publication of cartoons that they believed mocked the Prophet Mohammed. The brothers were killed two days later after a manhunt was capped when police shot the two in a standoff in Dammartin-en-Goele.

During the dragnet, Amedy Coulibaly, an associate of the pair, attacked a Jewish grocery store in Paris, taking more than a dozen hostage and killing four. Coulibaly had killed a policewoman the day before. Couliably was killed when police stormed the kosher market.