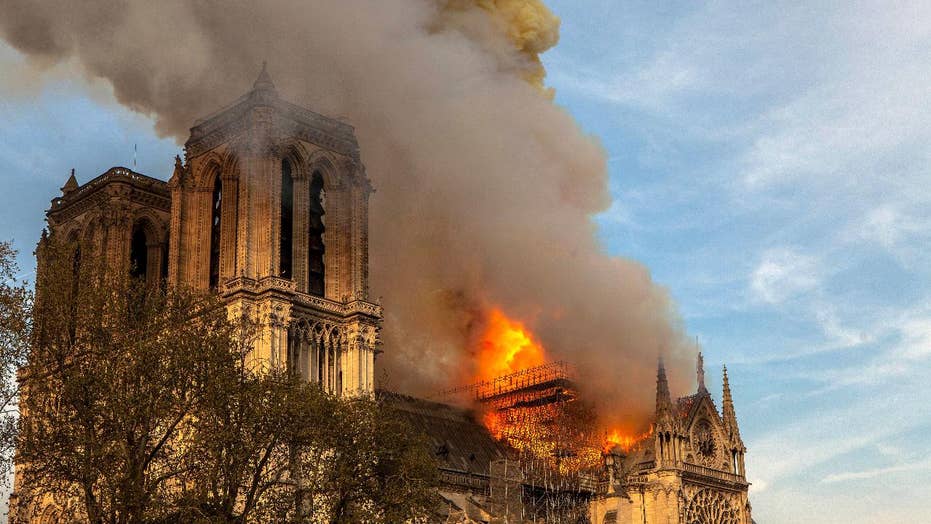 Greg Palkot reports from Paris on the aftermath of the fire.

The more than a billion dollars pledged from people around the world to help fund the reconstruction of Notre Dame Cathedral has yet to be collected, the Archbishop of Paris said in a statement, exactly one month after the spectacular fire broke out at the heart of Paris.

Michel Aupetit said Wednesday that while donors have pledged more than $1.2 billion to help restore the Gothic cathedral, so far “the greater part of these donations have not yet materialized.”

“The reason is simple,” he said in a statement. “The discussions are just starting to prepare conventions of private law. They will serve as a framework for expressing the will of these major donors.”

A woman is claiming she could see a ‘silhouette of Jesus Christ’ in the Notre Dame fire.

A massive fire broke out at Notre Dame Cathedral on April 15, destroying the church’s central spire and most of its wooden roof. The destruction – seen live across the world – sparked massive support.

Most paintings, relics and the Crown of Thorns purported to have been worn by Jesus at his crucifixion were saved from the inferno and are being conserved at the Louvre Museum. Several works still cannot be accessed, though they are safe, the French culture minister said Wednesday.

Operations to secure and conserve the cathedral must be completed before restoration works can start, Franck Riester said, adding that robots were removing gravel from within to be examined both by ministry experts and police seeking clues about the fire's origin.

He said a collection of funds for the restoration has so far bought in about $952.2 million.

Rubble and the cross inside the Notre Dame de Paris Cathedral, Wednesday May 15, 2019 in Paris. French Culture Minister Franck Riester says that one month after a fire engulfed Notre Dame Cathedral, the edifice is still being made safe enough for restoration to begin. (Philippe Lopez/Pool via AP)

"It's way too early to know if we have enough money or even too much money to restore Notre Dame of Paris," Riester said. He noted there can be a difference between pledges and what is actually provided, and added that with no "diagnostic" of the damage, a price of the restoration work isn't yet known.

"The needs are obviously colossal," he said.

Meanwhile, the Paris archbishopric is coordinating the receipt of donations through the Notre-Dame Foundation. Aupetit said in his statement that the foundation has received more than $15.1 million.

“That is why the collection continues,” he added.

The foundation is in talks with the Pinault and Arnault families, who have pledged $112 million and $224 million respectively.